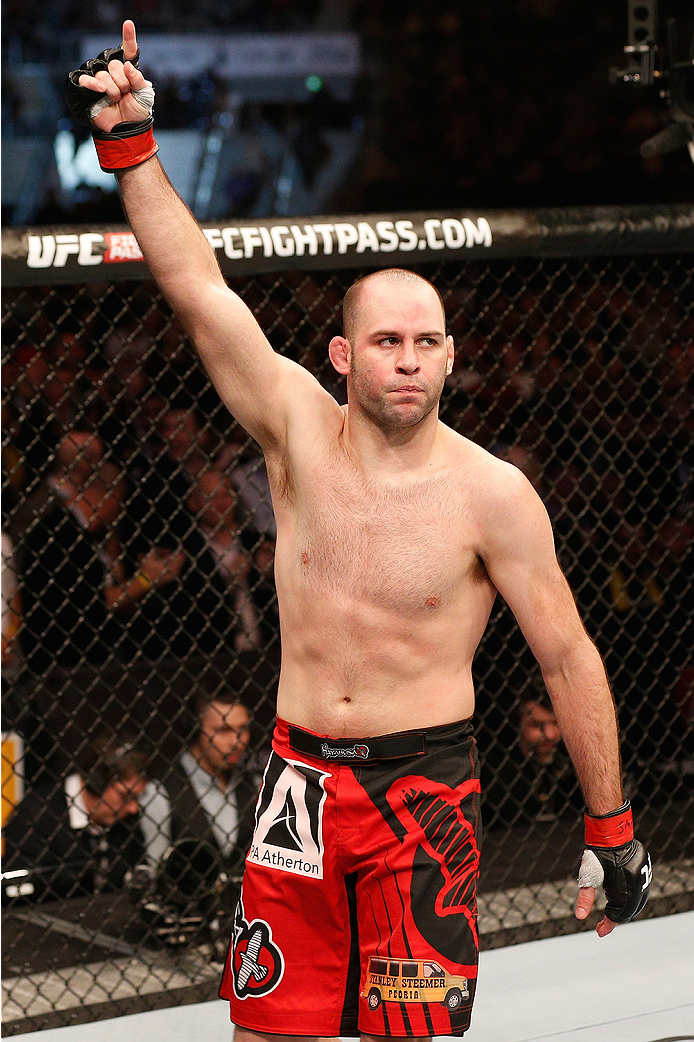 Here’s a little secret: students aren’t the only ones that look forward to the end of the school year.

When the final day of classes come to an end and the kids clear out their lockers, racing into the sunshine and several weeks without homework and assignments, the teachers are often right behind them, equally as excited to enjoy long summer nights and a respite from the day-to-day grind of lesson planning, grading papers and dealing with that student that always sits in the back row and disrupts class.

Kenny Robertson was one of those teachers. Key word: was.

Throughout his time on the UFC roster, the 31-year-old Spring Bay, Illinois native was the woodshop teacher at Metamora Township High. During the school year, he’d pull triple-duty, pursuing his craft in the cage and working on projects with his classes at school in addition to being a family man. Summer offered a bit of a break, but not any more.

“I actually ended up resigning this year; this is my last year of teaching so I’m going to try to train full-time now, which is unusual,” Robertson, who returns to action against Ben Saunders on the televised preliminary card portion of Saturday’s UFC on FOX event in Chicago, says. “Usually I’m like, ‘It’s summer – time to relax a little and train for some fights,’ but now it’s like, ‘This is your job, so you better keep busting your ass.’ No more summertime off.”

While the phrase “embrace the grind” gets thrown around a lot in mixed martial arts, Robertson’s past few years have really embodied that approach beyond its normal, clichéd usage.

During the school year, the former Division I wrestler at Eastern Illinois University would fit training in around his day in classroom - logging a workout before the sun came up and putting in more time in the gym once the school day was over before heading home for a little bit of family time and limited sleep before getting up to do it all over again the next day.

Sacrificing that time with family was “not ideal” as Robertson puts it, and so something had to give.

“Instead of waking up at five o’clock in the morning to do my cardio, I can wake up, get my son ready for day care, hang out with the wife a little bit and then go get an extremely good workout instead of one of those workouts where it was a good workout, but I didn’t have enough time to do what I wanted to do because I had to go to work.

“I want to spend time with my wife and sons, and more important than that, I want to be able to take a nap every once in a while,” he laughs. “When you’re busting your ass all the time, you need those naps and recovery time. I was just going non-stop between working out in the morning, going to work all day and then driving to work out, and sometimes my drives are an hour, an hour-and-a-half to get a workout in. 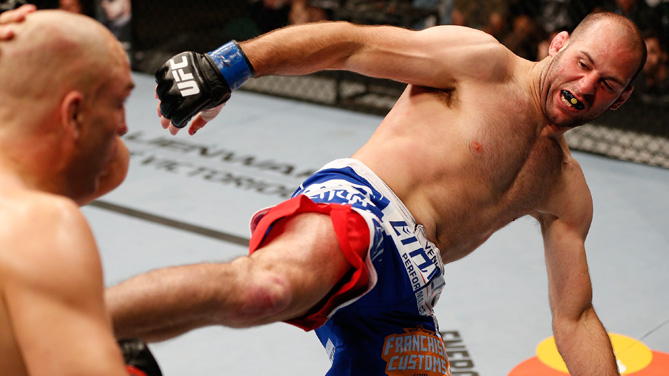 Having taken a sabbatical from teaching, the competitive 15-3 welterweight who carries a three-fight winning streak into this weekend’s showdown with Saunders is able to focus more on his training and his family, and give himself the best chance to make the most of his time inside the Octagon.

“I’m a very competitive person and I like being very good at what I do, but fighting and teaching kind of took away from each other in terms of having the time to get all the things done that I wanted to get done,” admits Robertson, who was a three-time NCAA qualifier at EIU, the same school that produced UFC Hall of Famer and former welterweight champion Matt Hughes, the recently retired Brian Ebersole and some guy named Romo that plays quarterback for the Dallas Cowboys.

“I felt like if I was going to be a full-time teacher, I should have better handouts and stuff. My worksheets would have been better. I was a woodshop teacher, so I had to make everything. If I was just teaching full-time, my students would have been a little better off than they were and it’s hard for me to be like that because I like to be great at whatever I do.”

That same perfectionist bent pushes Robertson in the cage as well, and now that his summers are free and fighting is his sole occupation, the perennial tough out is getting a chance to dedicate all his focus to developing his skills and continuing to improve as a fighter.

“It was one of those things where it’s not like I’m getting any younger and I’m at a point where all my opponents are getting a little bit tougher,” he offers. “I don’t know of any opponents that I’ve faced that had another job other than fighting. It’s one of those things where I’ve been – I don’t want to say, ‘unfortunate’ because I’ve been the one doing a real job and fighting at the same time, because that’s not big deal.

Nice for Robertson, but maybe not so nice for the opposition, beginning with Saunders this weekend in Chicago.
>UFC FIGHT NIGHT: DILLASHAW VS. BARAO 2