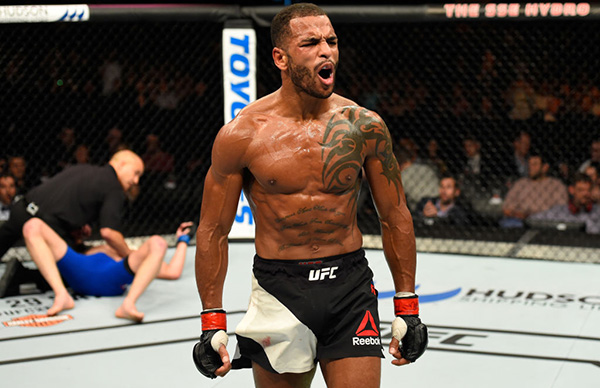 Danny Roberts of England celebrates his victory over Bobby Nash in their welterweight bout during the UFC Fight Night event at the SSE Hydro Arena Glasgow on July 16, 2017 in Glasgow, Scotland. (Photo by Josh Hedges/Zuffa LLC/Zuffa LLC via Getty Images)" align="center" />
It was the perfect night for Danny Roberts. Fighting at home in England, the Liverpool welterweight needed just over two minutes to make Oliver Enkamp’s night less than perfect.

More importantly, Roberts’ fourth UFC victory required no blood, sweat or spit flying in the Octagon. He left the way he walked in, and as he puts it, that night in London was simply “a matter of enjoying the moment.”

Sounds simple enough, but to get to that point in a pro MMA career that began in 2010, it took a little bit of an intervention from Roberts’ coaches.

In other words, every fight can’t be a war, every walk to the cage can’t see him let emotions take the wheel and leave him vulnerable to incoming fire from his fellow fighters. And “vulnerable” is the key word, because the 31-year-old turned to fighting to never be in a position like that, and as far as that’s concerned, mission accomplished.

“There’s a reason why I chose to do this and that reason could never be taken away and it’s down to vulnerability,” Roberts said. “When I was young, I never wanted to be in a situation where I was vulnerable. And right now I’ve empowered myself to a point where I don’t feel that. I don’t feel that anywhere and that’s something I pride myself in.”

Now it was down to getting his emotions in check, which was a bit more difficult.

“It was very hard,” he laughs. “If I’m honest, all of us as fighters, we’ve got our own stories, and nine times out of ten, we’ve come off a rough background or we’ve had some sort of worries or troubles. That’s ended up giving us this inhumane edge to be able to go out and do what we need to do to be able to help us in reality. As much as fighting is real, this is also life as well, so we kind of use one to empower the other and vice versa.”

So as much as this is business for Roberts, it’s always personal as well. Not in a trash talk, bad blood way, but in the way that anything that happens on fight night affects his life outside the Octagon. He loses a fight and he loses half his paycheck. He loses enough times and he might lose his job. He keeps winning and he could get a title shot and become a world champion. And becoming a world champion changes his life and the life of his son forever.

All with a swing of the fist. In his favor. Or against him.

It doesn’t get more personal than that.

“As far as my emotions, it’s been a long battle,” he admits. “I’ve been going back and forth with myself and sometimes, I’m my own worst enemy and I always will be. And the person that I see in the mirror when I wake up on a daily basis is the guy I’m competing with. The rest of the world doesn’t matter. And I’m just trying to refine and really dial in on certain factors, with my emotions being one of them. And I understand that a fight’s a fight. A lot of emotion goes into a fight, especially if you’ve got to overcome adversity. I wanted to take a different approach to it in the sense of just taking it for what it is. It’s a fight. Nothing on the outside matters. It’s just me and that guy. And with all those exterior pressures off and lifted, that means the emotions can stay subdued and under control.”

He pulled it off against Enkamp with a disciplined effort that earned him a knockout win. He will attempt to do it again on Sunday when he faces late replacement David Zawada in Hamburg. With Zawada largely an unknown entity coming into his first UFC fight, another night of cool “Hot Chocolate” is a strong possibility. But Roberts’ original foe, Alan Jouban, likely had the style to bring the brawler back in the Brit.

So this is a work in progress, and Roberts is willing to put in that work, a task that is a daily one for him because fighting isn’t a part-time gig.

“Not only do we think about the fight, but we have so many exterior things which will change and shape the dynamic of what might be going on or how we will approach our fight,” he explains. “People don’t know the enormity of how much something means to us. Going into the gym day in and day out for eight weeks, of course you want to win the fight. It means everything to you. On the outside, it’s more like a bet, the same way you go to a bookie and throw five dollars down on something. It’s taken light-hearted because they don’t understand what we do and how we live it, day in and day out. And they’re never gonna see it and never gonna get it. We’re in the public eye, and as cool as it is and as glamorous, it’s dark and grungy as much as it’s light and flamboyant. There’s two sides to it.”

“If I do that, I always feel like I’m winning,” he said. “And I’m gradually getting growth and benefitting from something somewhere.”

If it sounds like Roberts has figured things out just in time to make a run at the top of his division, that’s the way he sees it. He’s not about to make bold proclamations about who’s on his hit list or how he’s going to rule the world. He’s just confident that things are only going to get better from here.

“With the world that we live in, it’s easy to ridicule someone or really kind of tarnish someone off a performance or a hurdle that they fell on, but I feel like this is a new and improved Danny Roberts,” he said. “I know what I’ve got to do with my career. I feel like this is it right now and I feel like my career is gonna be long. I don’t doubt for one second that that I’m gonna have a decent future with tons of fights underneath my belt. I just know, but it’s gonna be something you’re gonna have to take step by step and fight by fight.”

The next fight is Saturday, and as long as it goes, all he’s asking for is ten seconds at the end of it.

“The gym is our job,” Roberts said. “We go there every day and it isn’t easy. It’s not like sunshine and rainbows and you’re just gonna fly through the gym and come home with a smile on your face. So when you get that ten seconds with your hand raised and you come back home with success, that’s your moment of feeling like God. It’s the moment of feeling supreme in the sense that everything that you set out to do has actually come to fruition.”

That must be some feeling.

“Even if it’s only for that moment, I’ve got plenty of those ‘ten seconds’ in my memory bank right now,” he said. “And it makes me want more.”