"I just go out there, do my thing, and expect a really hard fight." - Robert Whittaker 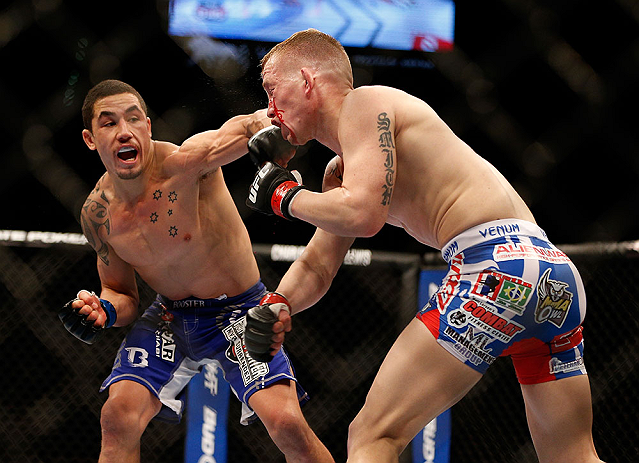 Fighters are just like us, installment #3,458. When Australian welterweight prospect Robert Whittaker began training at Montreal’s Tristar Gym for his May fight with Colton Smith, he admits that being around such a renowned team made him pause a bit.

“At first it was a little bit hard, because whenever you walk in the room, GSP (UFC welterweight champion Georges St-Pierre) is there and it’s a little awe-inspiring and you get a little bit star struck,” he said. “But work has to be done and you can’t let that hold you back.”

Whittaker, for all he’s accomplished thus far, is still 22, so those awestruck feelings are more than understandable, but like he said, there’s work to be done, and if his impressive third round TKO of Smith at UFC 160 is any indication, deciding to work with the Canadian standouts was the right call.

“The camp went really well,” he said. “I got some really good results. I also got along with the boys here quite well so I decided to stick with it. I’ve always admired the fighters that come out of Tristar, and when I got up here, it was pretty much like finding a family.”

Perhaps the only negative part about finding this new fighting family was leaving his family and friends back home for two months. But they understand that at this level of the game, sometimes that’s the price you have to pay.

“It’s trying at times, and they definitely feel that I have to disappear for two months at a time, but they’re very supportive of what I do and where I need to go to progress in this career,” said Whittaker. “And they’ve very behind the decision.”

Now 2-0 in the Octagon, the Ultimate Fighter Smashes winner has a huge upside that is getting only bigger with each performance, making him perhaps the most impressive prospect to emerge from Australia…ever. And at this point, he’s starting to notice the bandwagon filling up.

“It was only a matter of time before I showed them my ability and what I could do,” he said. “The fact that they’re starting to jump on board and that I’m starting to get recognized internationally is a big honor.”

Yet despite his knockout power, well-rounded attack, and athleticism, Whittaker’s greatest asset may be his humility. He doesn’t hurt his shoulder patting himself on the back, and he doesn’t expect anything. He goes to the gym, puts in his time, and then fights. No nonsense to the core.

“I always hope for the best, but expect the worst,” he said. “The fact that things went so well with Smith was just a blessing. I tried very hard for the best outcome, and that was the result. I’m very happy that I could pull it off and things went in my favor the way they did.”

His attitude mimics that of his UFC Fight Night opponent in Indianapolis this Wednesday, Court McGee. Add in the fact that both are Ultimate Fighter winners, and the similarities continue. So not surprisingly, Whittaker is hoping for the best and expecting the worst once again.

“He’s a super tough opponent,” said Whittaker. “He’s got the skills and the mindset to get through the show (TUF), so I can really respect that. And I think if I didn’t respect his ability as a well-rounded fighter, I would be a fool for underestimating him. But I’m just gonna go there and do my thing and see if he can keep up.”

The bout will be McGee’s second at 170 pounds, and the “Crusher” did look sharp in his welterweight debut in February, as he outpointed veteran Josh Neer. Whittaker agrees, but he’s ready for whatever happens this week.

“He definitely looks a lot more comfortable,” said Whittaker. “He looks a fair bit quicker as well, and it seems to be suiting him quite well. It’s good to see him down there, and it’s gonna be a bit of a war.”

For most, the idea of a three round war with a tough out like Court McGee is something to dread, not relish. Robert Whittaker is not most fighters.

“I’m in it for everything,” he said. “I’d go to war not expecting anything but to put on a good, bloody show. And if the tide turns quickly, I’m all for it, but I just go out there, do my thing, and expect a really hard fight.”