"It’s going to be an awesome striking match and I’m definitely gonna go in there and enjoy it." - Robert Whittaker 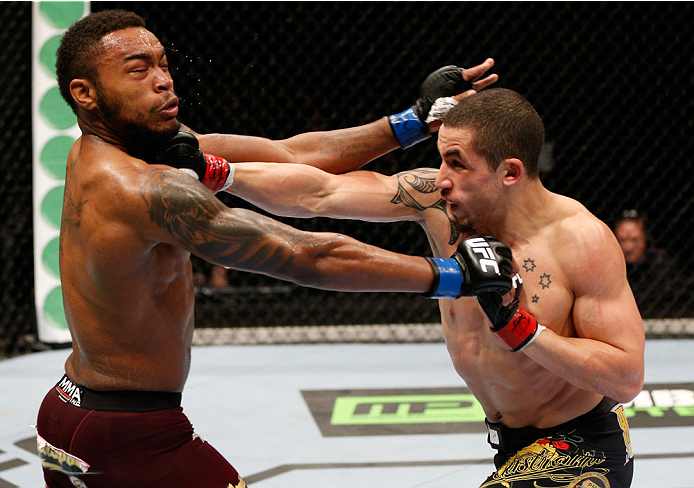 Robert Whittaker, who fights Clint “Headbussa” Hester this Saturday at UFC Fight Night: Rockhold vs. Bisping in Sydney, Australia’s Allphones Arena, is on the comeback trail.

Whittaker enjoyed a stellar beginning to his UFC career after winning TUF: The Smashes and then scoring a TKO victory over Colton Smith. But after a close decision loss to Court McGee and first-round TKO defeat against Stephen “Wonderboy” Thompson, the 23-year-old had his back against the wall before his June fight against Mike Rhodes in New Zealand.  Whittaker had to win or suffer a third straight loss, a statistic which often spells an uncertain future in the UFC.

But a solid decision victory over Rhodes returned Whittaker to his winning ways.  While Whittaker says the win restored some confidence, the hard-hitting fighter is disappointed that he didn’t get the finish.

“It was a bit safe for my liking,” he said of the win. “I like to fight for the finish; that’s why I fight and that’s what I aim for when I get in there.  But I’m happy with the performance. Everything went to plan, I did what I trained for and I’m very happy with the result. And coming off two losses and then having the win definitely puts me in a more comfortable position than I was before. I’m very confident.”

Earlier in 2014, Whittaker’s losses signaled to the New Zealand-born Australian that something needed to change.  In a move that is surprising on face value, Whittaker stopped preparing for fights at Canada’s famed Tristar gym, now doing most of his training camp at home in Sydney.

No longer just another UFC fighter among many at Tristar, Whittaker now has more control over his own training. And while Australia doesn’t boast the roster of name-value fighters that Tristar or other camps around the world do, the best Aussie talent are increasingly uniting together to help each other prepare on the world stage.  Whittaker believes this group of fighters, that includes fellow Aussie UFC fighter Richard Walsh, can rival the best camps around the world

“MMA was growing slower in Australia initially and I think the fact that we were fighting amongst ourselves restricted us using each other for what we can help each other with.  And the fact that now as MMA grows in Australia we’re fighting other countries and not fighting ourselves as much, we’re banding together a lot more. Each gym may have one fighter or one athlete, (but together) we’re diverse; we’ve only just started bringing them together and learning off each other, and together we’re up there with anybody else.”

Saturday’s fight will also mark Whittaker’s debut in the middleweight division.  The increasingly muscular fighter is simply too big to make the 170-pound welterweight limit anymore.

“The decision (to move to middleweight) came from health reasons.  When I started the sport I was only 18, I was a lot lighter and still growing. As the years went on I was developing a lot more muscle and the cuts gradually got harder and it reached a point where I was doing 16,17, 18 pounds (on the day of the weigh-in).  And I’d like to think that I’m young enough to have a career in this sport and I think for the longevity of my career I decided to move up.”

Not surprisingly, Whittaker is looking forward to testing Hester’s theory in the UFC’s Octagon.

“I’m happy if he’d like to test that. I’m always up for a bit of fun and I’m more than willing to put it to the test and leap into that division. I’m looking forward to it.”

Whittaker states that he plans to fight Hester where the native of Atlanta, Georgia is strongest.

“(His strength is) Definitely his hands, he’s got a good striking game and I’m looking forward to playing with that. You can’t ask for much more; it’s going to be an awesome striking match and I’m definitely gonna go in there and enjoy it.”

While Whittaker doesn’t offer a specific prediction, he does have a vision of how the fight will unfold.

“I think we’re both gonna be throwing but I think he’s gonna feel how hard I actually hit and he’s gonna go backwards.”

And Whittaker can count on the support of a packed Allphones Arena as he does battle in his hometown of Sydney.

“I’ve been waiting to fight in Sydney for the longest time. I was unlucky not to fight in the country last year and the fact that I’m fighting in my actual hometown is a huge boost. Having the crowd behind me and being comfortable in my own home, I’m gonna go out there and put it all on the line and enjoy it and revel in it.”