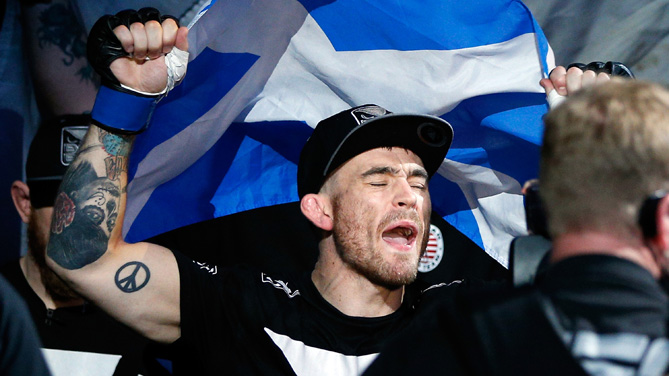 Robert Whiteford lost his first UFC fight. He wasn’t about to lose his second. And he didn’t. So even though his Octagon record stands at 1-1, with his overall slate reading 11-2, none of that really matters to “The Hammer.”

“Records are for DJs,” he said. “I’m there to fight, I’m a born fighter, I’ve been fighting since Day One, so you can ask me to fight on 24 hours notice, and I’ll still take the fight. It’s a pleasure for me to go in there and fight.”

And when the long awaited call to the UFC arrived on short notice in October of 2013, he wasn’t about to turn it down, even with a second round submission loss to Jimy Hettes being the end result.

“I was always going to take it, no matter what the circumstances were,” he said. “It could have been against anybody. I was just disappointed, knowing deep down that it wasn’t me a hundred percent out there. But I knew the next time I got an opportunity I was going to be well prepared and I was going to come away with the victory. There was never a doubt in my mind. I had a point to prove to myself and the rest of the world that I deserve my spot on the UFC roster.” 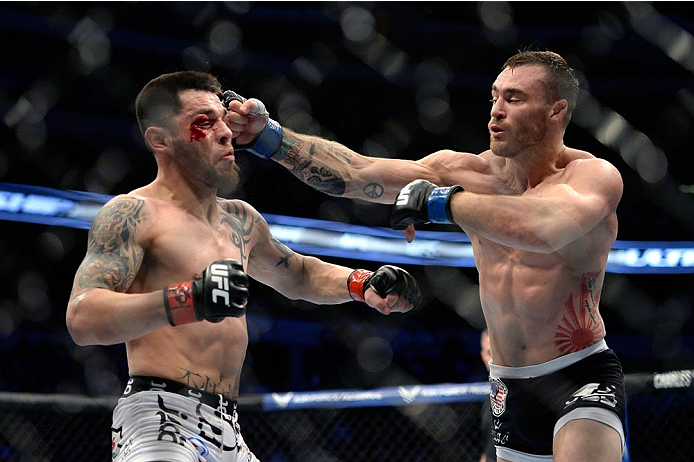 Whiteford proved that point at UFC 171 in March of 2014, defeating local favorite Daniel Pineda via unanimous decision. He was in the UFC and not going anywhere, but by the time he steps into the Octagon tomorrow against Paul Redmond in Glasgow, the Armadale, Scotland native will have been on the shelf for the last 16 months. Part of that was bad luck, as he was forced out of a bout against Dennis Siver last October. The other part? Well, you’ve got to have one of Scotland’s best on the UFC’s first visit to the country, right?

“Obviously with the UFC coming to Scotland, it’s a hundred percent that I needed to go on that,” Whiteford said. “It was good to hear that from the UFC, and it’s not like they’re just tossing me aside and saying we don’t really care where we put you. They have a specific plan for me, they wanted me to fight in Scotland, and that was a huge deal for them. So it was reassuring to hear that. It shows they have faith in me.”

They should. 11-2 as a pro, Whiteford has long been respected on the European scene, and it was assumed that one day he would get his spot on the UFC roster. It didn’t happen quite the way he expected it to, but what happened two fights ago really doesn’t have any bearing on his Saturday bout against Paul Redmond, even if he wouldn’t mind another go-round with Mr. Hettes.

“That loss, don’t think I forgot about that,” he said. “It still hurts me a bit, especially since it was my debut and I didn’t get the victory. I knew if I was prepared for it, I would have got that victory. I still want a Jimy Hettes fight as well. I’d love to get this one out of the way and then get another fight with Jimy Hettes and get a chance to avenge that loss.”

A rematch would be an intriguing one, but there is no bigger fight for the Scottish southpaw than the one happening tomorrow. Luckily, he’s been far removed from the media madness surrounding the event, as he’s put in the hours at the American Top Team gym in Coconut Creek, Florida.

“The craziness is part of the game; it’s not like I can hide from it,” he said. “A couple times it’s tried to hide from me (Laughs), but I get excitement from all aspects of the game. I love it. It’s good for my training and my preparation that I got a little more peace and quiet than other guys that are going to be fighting on the card, but receiving all the media attention is just part of the game and it doesn’t really affect me.”

But what about the ever-present possibility of ring rust after such a long layoff? Again, the 32-year-old is unconcerned with such matters. 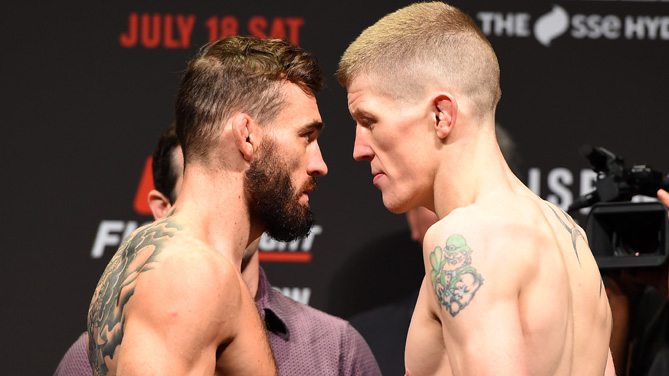 As for those final moments in the Octagon at The SSE Hydro before he’s waved into battle against Redmond, Whiteford says there will be no added emotions to fighting at home for the first time as a UFC fighter. None whatsoever.

“When I go in there, I’m a stone cold killer,” he said. “Emotions don’t even come in there. My last fight was at UFC 171 against a Texan in Texas. If emotions or nerves were going to get to me, it would have got to me then. Just because I’m in front of my home crowd, my countrymen and countrywomen, it’s not going to make a difference. Business is business. Stone cold killer. Emotionless.”