Robbie Lawler's Mentality Is Steady As Ever

Robbie Lawler started fighting professionally when all you really had to worry about was making weight, stepping into the cage, and trading punches with the guy standing across from you.

He made his first foray into the Octagon on May 10, 2002 in Bossier City, Louisiana, earning a unanimous decision win over Aaron Riley, a Midwest veteran with 22 fights under his belt to Lawler’s four. He was just a kid, but a kid with abundant potential and one that represented the Miletich Fighting Systems, which meant he was being shepherded along in his mixed martial arts odyssey by former UFC champion Pat Miletich while training alongside UFC titleholders like Jens Pulver, Tim Sylvia, and Matt Hughes and a host of other elite talents.

For an emerging fighter in the early days of his career, it was like a fresh-faced new actor being cast in The Godfather Part II and getting to work with Coppola, Pacino, De Niro, Robert Duvall, John Cazale and Diane Keaton. He was surrounded by a collection of incredible fighters who took him under their wings, passed on the knowledge they’d acquired during their careers, and coached him up on how to navigate life as a professional fighter.

More than 18 years later, Lawler is still making the walk to the Octagon, but now he’s the one passing down knowledge to the up-and-coming generation.

“Obviously the sport is huge now, so it’s a little different from when I started, so it’s just about giving back,” said Lawler, who takes on Neil Magny in a matchup that serves as Saturday night’s co-main event in Las Vegas.

“What’s the use of having all this knowledge and all these techniques if you’re not going to show anybody and instead keep it for myself?” asked the 43-fight veteran, who authored one of the most captivating career comeback stories by returning to the UFC in 2013 and capturing the welterweight title at the end of 2014. “It’s all about giving back to the sport, giving back to guys who are looking to create their own history, their own great life, and leaving the sport bigger and better than how you came into it.”

MORE: Fight by Fight Preview | Significant Stats | Fighters On The Rise | Anthony Smith Doesn't Give Up

Lawler, who trains with the talented Sanford MMA crew in a beautiful new facility in Deerfield Beach, Florida, never anticipated being the elder statesman imparting wisdom and offering guidance to the next generation of fighters, but he’s actually uniquely suited for the role.

The former welterweight champion is quiet and private by nature; far more interested in being home with his family or training than the trappings of celebrity and the fame many associate with being a professional athlete.

As the sport grew from its outlaw beginnings and became the mainstream staple it is today, the simple days of showing up, fighting, getting paid and going home were replaced by a week filled with photoshoots, pre-fight video packages, and media obligations, none of which really appealed to the soft-spoken heavy hitter from Bettendorf, Iowa.

“I never really was much about the media,” said Lawler, unable to stop himself from laughing at the admission. “I was more about show up, fight, let’s go home, and get back to camp. I don’t want to talk about it — I want to beat somebody up, make some money, go home, play some video games and work out; real basic.

“I’ve never tried to be a star or cared if people knew who I was when I was walking around; that’s not why I was in the sport. I was in there to make some money and have a good time and see the world and I’ve done a pretty good job of that.

“Now it’s all about helping guys grow and become better fighters and know the life a little bit because obviously the sport is the sport, but it’s not all sport; there is life involved,” he added. “There are different circumstances, so I’m happy to be helping guys navigate and get through stuff so they’re ready to compete and ready to live in this sport.”

Taking on this mentorship role and being surrounded by the outstanding cast of coaches and teammates at Sanford MMA has also helped rekindle Lawler’s love for competing.

From the time he returned to the UFC with a first-round knockout win over Josh Koscheck in February 2013 through his loss to Colby Covington last summer, the 38-year-old veteran was locked into “professional fighter” mode, initially focused on working his way to the top of the welterweight division and then locked in on finding a way back there once he was knocked from his perch.

He was selective about fights and opponents, trying to map out the quickest route back to the title, but he never got there. A loss to Rafael Dos Anjos was followed by an extended stay on the sidelines following knee surgery, and his 2019 campaign consisted of tandem losses — first a controversial stoppage opposite Ben Askren, and then a lopsided defeat against Covington. 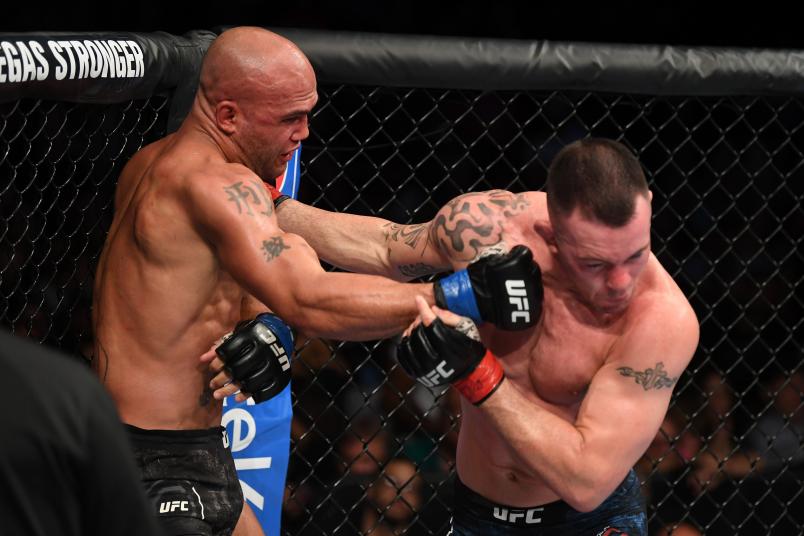 As he readies to return from the longest non-injury-related break of his career, Lawler is once again embracing the approach that guided him in the early days inside the cage, which is a big part of why he stepped up to replace Geoff Neal this weekend.

“I’m not really looking at career positioning,” he began. “I think there was a point in time where I did that, but now I’m focused on what I didn’t have to focus on for a while and that’s going out there and having fun; going out there and being a kid again and enjoying myself.

“It’s been a while (since I’ve approached things this way). Maybe I didn’t concentrate on it enough, but I feel good now and I can’t wait to go out there and showcase what I’m capable of doing.

“Short notice, two weeks — whatever,” added Lawler, whose last victory came against Donald “Cowboy” Cerrone at UFC 214 a little over three years ago. “I’m in decent shape and I know what I’m capable of, plus I can’t keep picking and choosing, obviously, because that stuff’s not working out. So why not go out there and do what I do best?”

On the eve of his return to the Octagon, Lawler isn’t thinking about snapping his three-fight slide or where a victory over Magny, who sits one spot behind him in the rankings and enters on a two-fight winning streak, will put him in the welterweight title chase.

He’s simply looking forward to walking to the Octagon with Johnny Cash blasting through the speakers, crossing the threshold into the cage, and getting into a fistfight on Saturday night.