"I never closed the door on going back to the UFC. I figured it was going to happen eventually." - Robbie Lawler 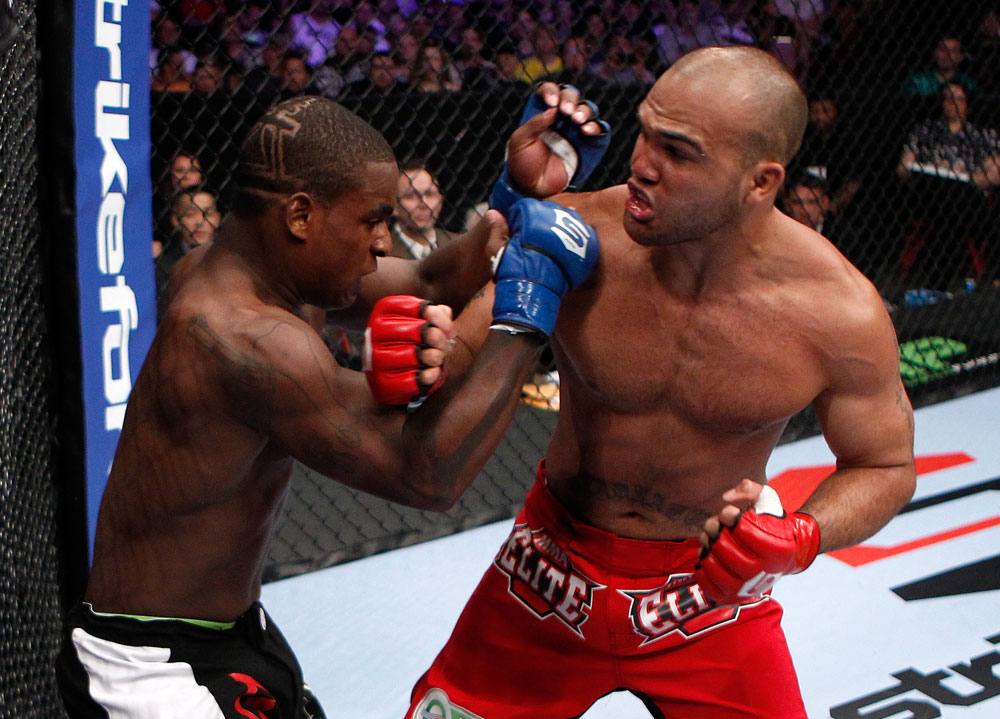 Robbie Lawler has been in the fight game long enough to know that there are those fans that are either fickle or that focus strictly on the UFC and nothing else. So with Lawler’s eight year plus absence from the Octagon to fight with various promotions, including PRIDE, Elite XC, and Strikeforce, there is the distinct possibility that when he returns to face Josh Koscheck at UFC 157 this Saturday night, there might be a few viewers who are wondering who the “new guy” is.

So for those fans, what does “Ruthless Robbie” hope they see?

“A hungry kid coming out ready to fight with my heart,” said Lawler, and even though he’s going to turn 31 next month and now has 29 pro fights under his belt, that description would have been apt for his UFC debut back in May of 2002, when he was a 20-year-old force of destruction who was expected to be the Mike Tyson of the UFC’s early Zuffa era.

Back then, Lawler didn’t fill notebooks with quotes or pound his chest and declare himself the king of the sport, but when the bell rang, he was always must see TV thanks to the kind of punching power that made people fall down in funny ways when tagged. And if they didn’t fall down, their original fight plan usually got altered significantly.

It was a heady time for Lawler and the sport, as the formerly outlaw sport started showing signs of mainstream acceptance before the MMA explosion of 2005. The San Diego native, who trained out of the renowned Miletich Fighting Systems camp in Iowa, won his first three UFC bouts in 2002, decisioning Aaron Riley and stopping Steve Berger and Tiki Ghosn.

When asked what he remembers about those early days, he says “Just going out there and fighting hard. Not a lot of people were realizing what you were doing. The sport wasn’t as big when I first started in the UFC. The sport’s really evolved and it’s more mainstream now.”

Yet by the time it started hitting the mainstream, Lawler’s UFC stint had come to a halt. A UFC 45 win over Chris Lytle was surrounded by losses to Pete Spratt, Nick Diaz, and Evan Tanner, and now fighting at middleweight, he took his show on the road.

Never failing to find success or solid work, Lawler delivered wins over Joey Villasenor, Frank Trigg, “Ninja” Rua, Scott Smith, and Melvin Manhoef in various organizations, while suffering losses against “Mayhem” Miller, Jake Shields, and “Babalu” Sobral. He won a couple of belts as well, but never told himself that his UFC days were over forever.

“I never closed the door on going back to the UFC,” he said. “I figured it was going to happen eventually.”

And with Strikeforce (where Lawler fought eight times) closing its doors after its January 2013 event, it left things open for Lawler to make his return. But it won’t be without a couple key changes. First, he will be returning to welterweight, something he admits to thinking about even when he was in Strikeforce.

That’s a big move, especially for someone who has been fighting as long as Lawler has, but he says the cut so far has been smooth.

“Everything’s going good and I’m not too worried about my weight. I know I’ll make it, and the furthest thing from my mind is making weight. I’m just concentrating on getting my body ready and getting mentally prepared.”

And aiding in that process will mark the second big change for Lawler, as he’s moved down to Coconut Creek, Florida to train with American Top Team. The decision surprised some people, who will always associate Lawler with the members of the Miletich camp (though he has also done work with the Power MMA team in Arizona), but after losing three of his last four Strikeforce bouts, a change will probably do him good.

“My manager, Monte Cox, set it up,” Lawler said of his move to ATT. “There are a lot of good training partners down here, a lot of good coaches to push you and get you ready, they know what it takes to get a guy ready, and they’re bringing out the best in me.”

That’s not to say ties are severed to the past, as longtime striking coach Matt Pena has also joined Lawler in Florida for this camp.

“Pena’s out here and he’s working with some of their guys too, and it’s a good atmosphere,” said Lawler, who will need all his tools sharpened to beat Koscheck, a top welterweight contender who has the wrestling that can give him some issues. Has he kept an eye on “Kos” and the rest of the UFC’s 170-pounders?

“A little bit, not too much,” he said. “I’ve been watching everyone from afar and seeing how everything shakes out, and he (Koscheck) is definitely a big name in the UFC.”

A big name who it would be nice to add to his victims’ list come Saturday night. And if that’s the case, this blast from the past can immediately make himself a major player in a stacked division. But if you’re expecting a bombshell statement from Lawler, nothing has changed over the years because this is one fighter who saves his bombs for the Octagon.

“I don’t even look that far ahead,” he said of his future prospects. “I’m just coming out and trying to make a statement with every fight, no matter how big someone else thinks it is. It’s always big, but I’m not too worried about where this puts me in someone’s picture.”