Robbie Lawler: As Ruthless as Ever

"I’m going to go out there and impose my will and do the things I’ve been trying. I’m very excited about it." - Robbie Lawler 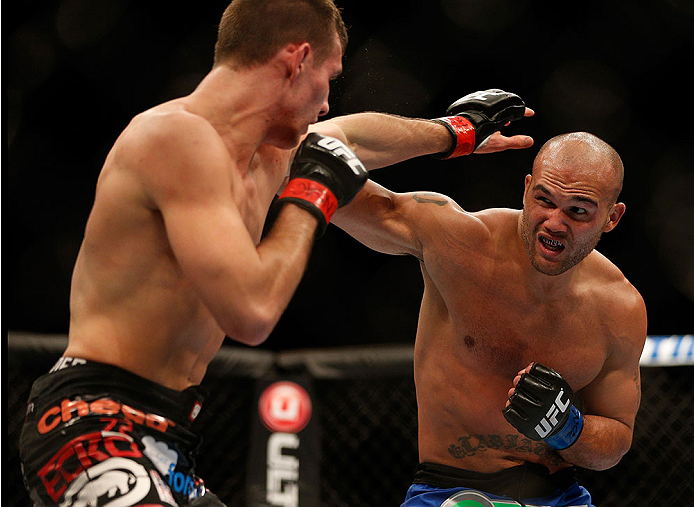 Reputations are earned in mixed martial arts and few have built a more deserving one than Robbie Lawler. The heavy-handed knockout artist has spent the past 12 years living up to his “Ruthless” moniker as he’s settled his opposition in spectacular and oftentimes vicious fashion. To put it into simple terms: Lawler’s business is separating grown men from their consciousness and business has been booming as of late.

While the 31-year-old’s career has splintered into several chapters over the years and he experienced a mixed bag of success across multiple platforms, it is the most recent installment that has the gritty veteran teetering on the verge of virtuoso status. Where he was once hampered by potential seemingly unfulfilled from his early days inside the Octagon, the American Top Team product has returned to his old stomping ground, and has done so with a vengeance.

After nine years slinging leather all across the globe, Lawler came back to the UFC in 2013 as a man on a mission. He stopped perennial welterweight contender Josh Koscheck to begin his comeback at UFC 157 in February, then battered journeyman Bobby Voelker in his next showing five months later in Seattle. The strength of those performances not only generated a substantial amount of heat for the reinvigorated welterweight, but made it clear that he was in the midst of one of the most impressive career resurgences in recent memory.

Suddenly, where Lawler was once teetered in and out of elite status, he was charging front and center in a fashion that couldn’t be ignored.

“I’ve turned a page and it’s my time,” Lawler said. “My coaches down at American Top Team have noticed and it’s my time to shine. It’s my time to show who I am and that is what I’m doing. That is part of what you have to do as a UFC fighter. You have to put yourself out there a little bit and let people know who you are. I’m willing to do that now and that wasn’t always the case.”

With every high profile fighter at 170 pounds calling for a title shot, Lawler knew a victory over Voelker wasn’t going to jump him to the front of the line, and he set his sights on getting his hands on one of the division’s best in his next outing. That opportunity materialized against talented young Canadian Rory MacDonald at UFC 167 in November, and Lawler proceeded to make the most of his chance to send a message.

Although the Tristar fighter had his moments in the tilt, it was Lawler’s power that ultimately made the difference in the fight as he picked up the split decision victory. In the immediate aftermath of his clash with MacDonald, Lawler’s next step remained unclear, but when champion Georges St-Pierre made the decision to vacate his title, the biggest opportunity of all presented itself.

While Lawler has laid claim to a multitude of belts in his career and contested for several others, he’s never stepped into the Octagon with UFC gold on the line. That moment will come this Saturday night at UFC 171 in Dallas when he squares off with Johny Hendricks - a fighter who has also proven to be capable of ending a fight with one clean shot.

Yet, although Hendricks has evolved from his wrestling base to push a power-striking attack, Lawler isn’t overlooking the background his opponent sprang from. In fact, Lawler believes his task on fight night will be to make sure Hendricks wants no part of the swat game and turn the Oklahoma native back into a wrestler.

“I think it’s my job to force him to change things up,” Lawler said. “If I’m facing a stand-up fighter, I need to turn him into a wrestler. If I’m facing a wrestler then I need to force him out of it by forcing what I do on them. You have to force what you do on somebody. You don’t worry about them, you worry about what you want to do in the fight and that’s what I’m going to do. I’m going to go out there and impose my will and do the things I’ve been trying. I’m very excited about it.”

Where the absence of GSP and the crowning of the first new champion in the welterweight ranks for the first time in six years could have easily overshadowed the event, the potential fire fight that could unfold between Lawler and Hendricks has sent a palpable jolt of electricity through the MMA community. The anticipation for this weekend’s main event is high and even Lawler - who historically carries a stoic presentation - is fired up for the opportunity to capture the welterweight title.

“I’m as excited as I get,” Lawler said. “Fighting for the UFC is huge and fighting for a UFC title is even bigger than that. I’m excited for this fight and it is a huge opportunity for me. I’m ready to get in there on Saturday.”

As Lawler prepares for the biggest fight in what has been a career filled with highlights and memorable moments, his bout against Hendricks will be the culmination of a journey that started 12 years ago in Bossier City, Louisiana. That night he beat Aaron Riley to win his promotional debut at UFC 37, and on Saturday, he will finally have the chance to fight for a UFC title.

While the years have taken him on a roller coaster of a journey, he doesn’t give much thought to anything but the here and now. All he cares about is the immediate challenge and making the most of the moment he’s in. On Saturday night in Dallas that moment will be the biggest of his career and he has every intention of making it the most memorable.

“I don’t ever really look at it that way,” he said of the title shot being a long time coming. “I always look at it as right now. I am who I am today and on March 15 everyone is going to see what I’m capable of. I’m going to be the new welterweight champion and it is going to be awesome.”