Robbie Lawler: In His Own Words 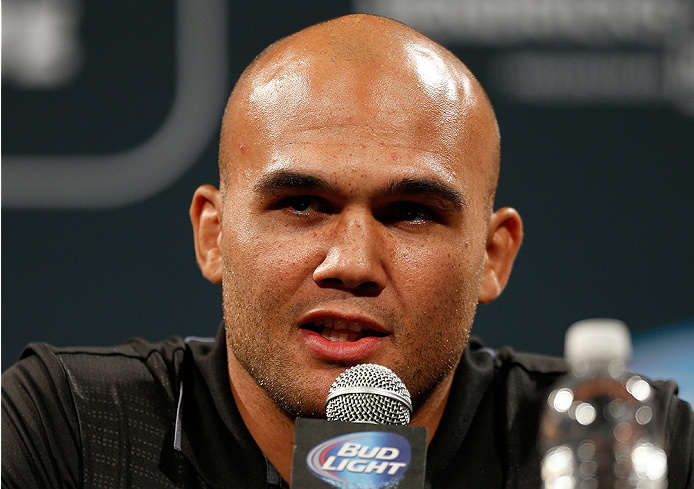 Robbie Lawler conducts interviews much like he fights. There are no wasted words (punches) and every sentence (strike) counts. So as his UFC 181 main event against welterweight champion Johny Hendricks approaches on December 6, let’s relive the career of “Ruthless Robbie” in his own words.

THE BIRTH OF THE POWER
“I grew up fighting, I grew up hitting the bag, and one thing that people don’t realize is that I started lifting weights in third grade. And when I hit the bag or kicked the bag, I did it hard. I did everything hard and with the intent to hurt somebody and knock them out and I think that helped. I think I built the punching power; I don’t think it was given to me. I think that would be ridiculous to say that after all my hard work and years of training that my knockout power was given to me like it was a gift or something.”

LAWLER’S LAW
“If I play baseball I'm going to hit home runs; if I'm playing defensive end I'm going to get sacks, and I'm going to make it look exciting. That's just the way I do stuff. It's not that I'm trying to do it. It's just natural. If the crowd likes it, they like it. If they don't they don't, but usually they do.”

LAWLER’S LAW – PART II
“I keep things simple,” he said. “I keep moving ahead, keep moving forward, and I don’t dwell on anything in the past.”

BEGINNINGS
"I always liked to fight. My brother beat me up, and when we went to school, kids would see who was the toughest kid out in the schoolyard. It was just a natural instinct to fight and roll around. My dad got me into martial arts when I was little, but then I moved to Iowa and started wrestling, which I had never done before. Then Pat (Miletich) would come up to the high school and train. He saw that I was a pretty tough kid and he told me to come up and train with him."

LIFE WITH MILETICH FIGHTING SYSTEMS
“It was just a lot of hard working guys, guys who did it before the sport was cool and worked really hard and got after it every day. Everyone was tough back then. If you lasted a week at our gym, that’s saying something.”

SACRIFICE
“I liked training and I love competing, and going to the gym I was around a lot of guys who liked to do the same thing, and they were hungry and were going to make me better. I had friends outside of the sport, but all my buddies were older: Jens, Horn, Hughes. Everyone was older and I really didn’t look at myself as a 20-year-old. I saw myself as their age, even though I was young.”

LIFE OUTSIDE THE UFC
“I was very content. A lot of people didn’t know I still fought. Back then it was either UFC or nothing. Even when I was fighting on CBS and on Showtime, some people thought I was out of the game, which I kinda liked.”

THE WOODSHED YEARS
“I could grow as a person, be a fighter, and be out of the light. I was just going out and going to work every day. I’m one of those guys and will always be one of those guys who would rather not be on TV and do all this stuff and make the same amount of money, and if no one knew what I was doing, that would be fine with me. I just love competing and this is what I chose.”

LEGACY?
“I was young. I was there for the moment and I wanted to just train hard and beat people up and have fun. I didn’t worry too much about those things. But it’s definitely something you think of as you get older.”

AN INSPIRATION
“I noticed that I inspire a lot of people the way I rejuvenated my career and always kept believing in myself. And it’s awesome to be an inspiration to people, but I really just concentrate on myself and just try to keep getting better every day, and that’s all I can do. But it’s nice to mentally push someone and inspire not just fighters, but normal, everyday people.”

WINNING THE TITLE?
“There will probably be a big smile on my face, but I think the smile on my face is going to be more about the journey and not necessarily about that day. It will be the journey of everything and everyone who’s come along for the ride.”