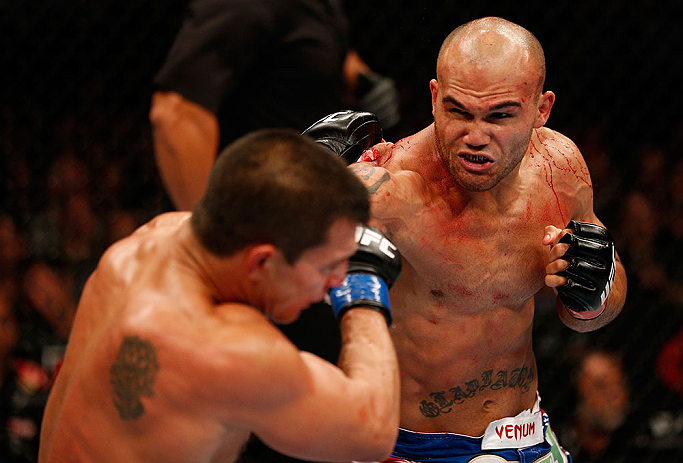 It’s a good time to be Robbie Lawler. As the UFC celebrates its 20th anniversary, the welterweight contender is in a featured bout on the UFC 167 main card against Rory MacDonald, he’s won two straight, both by knockout, since coming back to the organization in 2013, and with a win on Saturday, he will skyrocket into the 170-pound title picture.

It can almost make one wonder what would have happened if he had returned to the UFC earlier and also made the move back to 170 from middleweight a long time ago. It doesn’t make Lawler wonder though.

“No, because I was doing what I thought was right at the time, and I had fun doing it, so I’m not too worried about anything in the past; I’m just trying to get better day-to-day and get better each fight,” said Lawler, who, at 31 seems to be in a better place - professionally and personally – than he’s ever been.

Married and a father now, Lawler has found a training home that suits him with the American Top Team in Coconut Creek, Florida, and when it comes to what he’s doing in the Octagon, his knockouts of Josh Koscheck and Bobby Voelker this year have said plenty. So if you think he’s a new man, well, to some fans who weren’t around when Lawler was wrecking people in the UFC during his first stint from 2002 to 2004, he is, something that amuses the San Diego native.

“Sometimes fans don’t really know that I’ve been around and plugging around for many years, but that doesn’t really matter to me,” he said. “I’m new and improved and just beating people up now.”

He did a pretty good job of beating people up before 2013 too, but it was in those early days of the Zuffa era that Lawler brought a Tyson-like intensity to his fights, with fireworks usually the result.

“I was just going around fighting and having a good time and competing at a high level, but I wasn’t too worried about anything,” said Lawler of his first UFC stint, which ended with a 2004 loss to the late Evan Tanner that left him with a 4-3 Octagon slate. “But I don’t really have time to reminisce and figure out where I’ve come from. I’m just striving to get better. There’s too much training and too much time away from my family, so there’s not much time to do much else, just train and get better. I think you need to know what happened in the past, but you need to focus on getting better and believing in yourself. That’s what it comes down to.”

Lawler makes a good point. Yet while most of us with nostalgic rose-colored glasses always hope to see returning fighters mimic that past form, only to be disappointed, Lawler is one of the rare few who have shown the traits and performances from his younger years, exciting a new generation of fans in the process. But the true test comes on Saturday against MacDonald, the young man seen to be the heir apparent to the throne held by his friend and training partner Georges St-Pierre. And Lawler makes no bones about it, “Ares” will certainly be a stiff test.

“He’s awesome in every aspect,” said Lawler of MacDonald. “He’s got really good standup, his ground’s really good and his wrestling’s really good. He trains with a good camp and he’s getting better every fight. So he’s one of those guys you have to be 110 percent ready for, and see what happens.”

If what happens is a win, Lawler will not only have capped off a remarkable year with a third consecutive victory, but he will be on the doorstep of challenging for the UFC title that has always eluded him.

“I’m not looking past him,” insists Lawler. “He’s number three in the world and I can’t look ahead of him; he’s too good for that, so I’m really just concentrating on him. But it definitely puts me in the picture.”

That’s all Lawler is asking for at this point, to be in the picture. From there, his fists can do the rest of the work, and while he doesn’t like to walk down memory lane too often, he did chuckle when reminded of this quote he delivered in 2002:

So has that changed at all?

“That’s the way I do things,” he said. “I just like to get after it, and the way I fight is the way I try to play sports – all out while trying to be the best.”