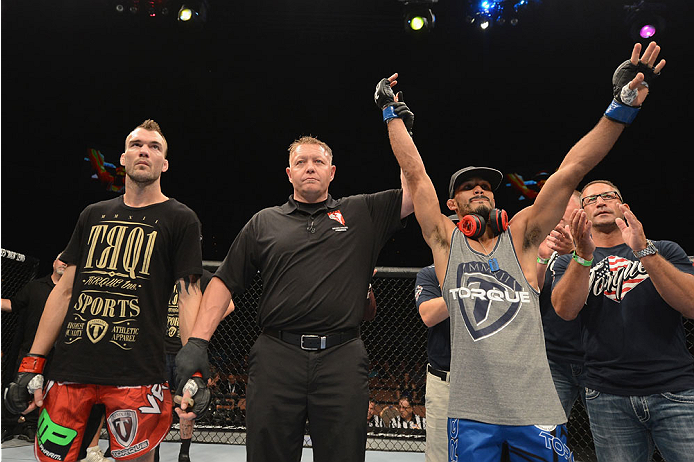 When it comes to spectacular debuts, Rob Font took the cake with his first-round knockout of George Roop at UFC 175 in July of 2014.

Not literally, as there was no need to send out a search party for the Massachusetts bantamweight. But as far as keeping the momentum going and soaring up the 135-pound ladder after scoring the biggest win of his career, that was a no go for Font, who finally returns to the Octagon on Jan. 17 to face Joey Gomez.

“I don’t know how Donald Cerrone fights as much as he does,” Font laughs. “It’s hard. I tried to rush it and it just didn’t work out. I made a couple dollars on my last fight, so I decided to sit back, relax, pay a couple bills off, pay my car off, and I just got better.”

Font did supplement his fight purse with a Performance of the Night bonus. And after a hectic couple years in which he fought seven times, he earned a bit of a breather.

“2013, 2014, I stayed busy the whole time,” he said. “CES kept me busy, I was fighting back-to-back all the time, so I think I needed a break. I got in there, made my debut, I feel like I made a little splash, and then we got the Chris Beal fight at Foxwoods in September, but I got injured. Then I was feeling okay, so I said let’s just go for the October 4th fight in Halifax against Mitch Gagnon, and then I tweaked something again and I said I’ve got to chill out and take some time off. I was definitely trying to keep the ball rolling and fight as many times as possible, but I decided to stay low key, stay off social media, heal up a hundred percent and just keep getting better. And that’s what I did.”

Font, 28, doesn’t sound nervous about his return, doesn’t have that tense tone to his voice where he’s secretly worrying whether he’s been gone too long. Instead, the break has not only allowed him to get healthy, but has also enabled him to focus on the technical side of the fight game.

“I was fighting a lot, so I never really trained to get better,” he said. “I trained to stay in shape and make sure my weight was on point. But this time around, I got to really concentrate on the little details and drill and focus and work on everything from jiu-jitsu and wrestling to a little bit of judo. I definitely locked down my basics, but I also drilled and got better.”

And who knows, maybe absence has made the fans’ collective heart grow fonder.
“Hopefully,” he laughs. “It’s been a long time and I’m anxious to get back. I know I’m anxious to see Dominick Cruz back and see his fight, and hopefully that works in my favor too.”

“Hopefully,” he laughs. “It’s been a long time and I’m anxious to get back. I know I’m anxious to see Dominick Cruz back and see his fight, and hopefully that works in my favor too.”

Former bantamweight champion Cruz returns on the Jan. 17 card to face current titleholder TJ Dillashaw in the main event of the card at TD Garden in Boston, just a stone’s throw away from Font’s home in North Reading, making this a win all around for the 135-pound prospect.

“I don’t have to travel, I don’t have to worry about the time change, I get to hang out with all my friends and family around the area, and I’ve fought in the New England area, so it’s just another day for me,” he said. “A lot of people say there’s going to be a lot of pressure, but I’m like, not really, because this is what I do anyway. Now I’ve just got a couple more people that I don’t know watching me. (Laughs) And I had that in Vegas.”

All that’s left for him is the actual fight, and in Gomez – who replaces the injured Patrick Williams – he will see a familiar face.

“He actually helped me train for one of my title fights,” Font said. “I know exactly what I’m getting myself into. I sparred with him, I rolled with him, and we have the same strength and conditioning coach. We don’t train at the same gym, but we train at the same strength and conditioning gym. He’s a great dude, great style, he was willing to drive an hour and a half from New Hampshire to help me out, so I’ve got nothing but great things to say about him as a person. As far as a fighter, he’s a tough fighter, but I think I’m a little more technical than him and a little more diverse. He definitely got better, and I definitely got way better, so it should be interesting.”

“I think he’s gonna come out super aggressive, trying to get the quickest finish as possible, trying to make a splash,” Font said. “He’s going to overextend on something, and I’m gonna catch him.”

Sounds like a Rob Font fight. And if you’ve forgotten what he did in the Roop fight, he wants to remind you. Quickly.

“I like to deliver and give the fans what they want to see, and if they want to see knockouts, I’m gonna try my hardest to knock him out. I’m definitely going for the first-round knockout, for sure.”