As someone who has covered boxing for over two decades, I’ve always held true to the belief that nothing in the sweet science ever compared to a Felix Trinidad or Miguel Cotto fight in New York City’s Madison Square Garden.

The energy, the music, the drums – it’s cliché, but it always felt like the roof was going to fly off the place. Think a Georges St-Pierre fight in Montreal and you get the picture.

But when those Puerto Rican icons fought, it wasn’t just those in the venue that got involved.

“It was always Trinidad and then Miguel Cotto,” said UFC bantamweight contender Rob Font. “Any of those fights, you were always getting out and getting invited to the barbecue. It was like you had to watch those fights. It was an event. I remember those nights as a kid and all those parties, staying up and watching those. It would be a party through the undercard, and right when Miguel Cotto or Trinidad fought, the music turns off, everybody stops, and you all get around the TV and watch the fight.”

Now at the No. 11 spot in the 135-pound rankings and fresh off back-to-back victories over Sergio Pettis and Ricky Simon, the 33-year-old wants fans to feel the same way when he fights.

“I want to bring that to MMA,” he said. “When Rob Font fights, you get the family together, you pull everybody together and you pay attention to the whole card, but obviously my fight.” 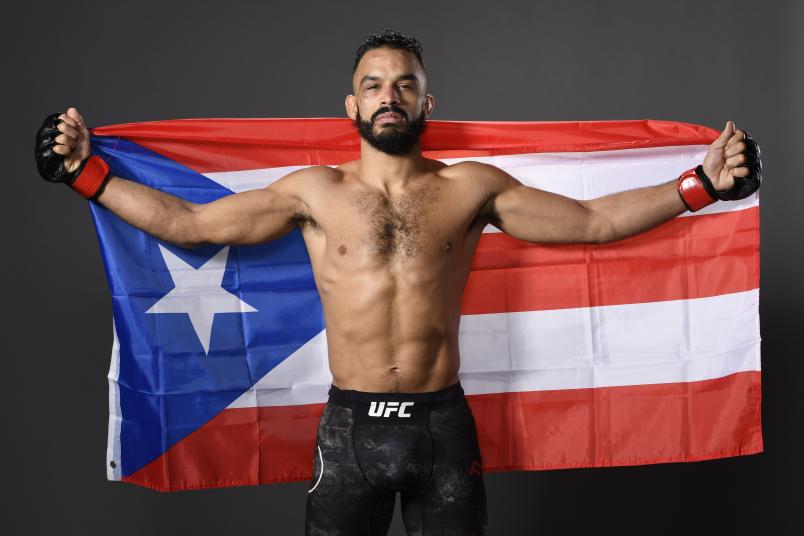 Finally cleared to return to active duty after healing up from a knee injury, the popular contender from Woburn, Massachusetts is in a good position to one day make those goals a reality, and if he does, he will be making a statement for an island that isn’t a hotbed of MMA, but that has plenty of reps looking to change that situation.

“You had Jorge Rivera, Anthony Pettis and even now you've got myself, so we're trying to definitely put it out there,” Font said. “It (MMA) is not as big as boxing or baseball, but it's getting there. Not having events there has hurt us as an island as far as getting out there and them getting behind MMA, but when we get out there, I'm gonna represent and put on for the Boricuas.”

The lone UFC event to take place in Puerto Rico was UFC 8 in 1996, much too long for fans who are ready to see the Octagon back on la isla del Encanto. So what would it look like to see a UFC Puerto Rico event in the future?

“It would be insane,” Font said. “There would be a swarm of Puerto Rican flags out there. It would be a beautiful scene. Obviously, I wouldn't mind being on that card; it would be something special.”

On it? Jeez, Font, we’re expecting a main event.

“There's a lot of great Puerto Rican fighters,” he said. “We have myself, the Pettis brothers, Tecia Torres, even Jimmie Rivera, and that would be another fight I would love to get. Jimmie Rivera, co-main event or main event in Puerto Rico would sound amazing.”

It would, followed by a post-fight meal with some chicharron and mofongo. But first things first, and that’s Rob Font continuing to represent his island like only a Puerto Rican fighter can.

“I feel a responsibility to go out there and fight,” he said. “And not even just fight, but be out there and really show the swag and the rhythm you see the Puerto Rican boxers and fighters have. I feel like it's my duty to live up to that.”