Middleweight prospect Marvin Vettori doesn’t have a lot of time to look back on where he’s been over the last 24 years, especially when he’s got Omari Akhmedov attempting to punch him in the face on Saturday night in Las Vegas. But when it comes to getting ready for his fight, he does take a moment or two to reflect on his journey to the biggest stage in mixed martial arts.

“I always look forward, but sometimes it’s good to take motivation from what you’ve done before,” admits the native of Mezzocorona, Italy, who, like most Italian boys, found his first athletic outlet in soccer.

What he did like were martial arts, and by 16, a perfect storm came together to produce a future fighter. 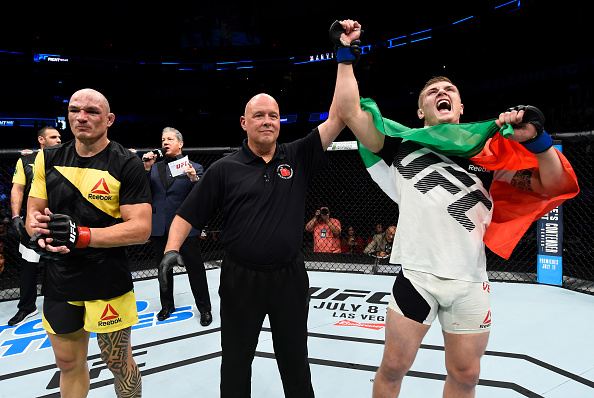 Vitor Miranda at Fight Night Oklahoma City" align="center" />
“I was always into martial arts, but it was more like a game,” he said. “I always liked training and being around the gym. One day, a guy came and did a seminar and, at the same time, I was already getting fascinated by martial arts, and I started to watch PRIDE and I said, ‘Man, these guys are super human. I want to be like them.’ They looked like they were made of iron, they were a different level, athletes above any other athlete. They can fight ten men and beat them. (Laughs) I wanted to do this.”

The names he mentions are familiar to any fan of the fight game: Fedor, Shogun, Wanderlei. And when the aforementioned seminar took place, the teenager got a dose of reality that was right in line with the way he was thinking and the way those PRIDE legends were fighting.

“I liked his approach, he was very serious,” Vettori said. “He was severe in a way. I was putting in some work and every time I went a little bit harder with people, they were like, ‘Are you trying to beat me up?’ This guy came like, ‘Beating people up is good. It’s what we’re supposed to do.’”

It was what he needed to hear, and his mind was made up. He was going to keep training, finish school, and then become a fighter. There was just one problem.

“I was naïve in a way,” he said. “I didn’t know that MMA really didn’t exist in Italy. Look, we have just two guys in the NBA, volleyball is getting bigger in the place where I’m from, but other sports, we are a lot of steps behind soccer.”

There were MMA events here and there, and Alessio Sakara was a member of the UFC roster at the time, but if there was the opportunity for decent MMA training, it was in Rome, and that was a six-hour drive from Mezzocorona.

So Vettori just put his work in, picked up what he could about the sport, and the Christmas before graduation, he took a trip to England and met someone who put him in touch with the London Shootfighters team.

“As soon as I stepped into their gym, I started to learn a lot about the sport.”

He also realized that his training over the past two years was, “Completely wrong – It wasn’t MMA – I was putting in the work, but the wrong way.”

He was hooked, though, and after finishing school, he told his parents that he was leaving for England.

Going back was a tempting thought, one he would quickly dismiss.

“I slept on a sofa for four or five months,” Vettori said. “I had printed a hundred CVs and began walking around London, just giving CVs all around until I found a job. I worked at that job for six months, then worked as a bouncer.”

The days were long for the budding prizefighter, working at clubs until 4am, grabbing a few hours sleep and then going back to the gym by 2pm before doing it all again. But he kept at it.

“I didn’t want to call my parents,” said Vettori, who was only 18 at the time. “I said, ‘I can’t show them my weaknesses.’ I was wrong, because they always supported me.”

Today, he’s a UFC fighter, with 12 wins in 15 pro fights, two of them coming in the Octagon. After two years with London Shootfighters, he returned to Italy for a spell before settling down in California, where he works with the Kings MMA team. But his heart is never far away from home, where he is one of the young fighters who has the potential to bring MMA to a wider audience.

“I’m getting some recognition, but in Italy, it’s still a sport that hasn’t exploded,” Vettori said. “It’s not like everywhere else in Europe. It’s kind of like France, where it’s hard to get to the general public. But it’s coming step by step. When people start to recognize it, they start loving the sport. Other athletes actually appreciate what we do a lot because they can imagine what it takes and they do some MMA training here and there, so it’s starting to be recognized slowly. It’s getting bigger but it’s not there yet. And it’s my duty also to make it big in the near future.”

It’s a duty he takes seriously, one he thinks about every time he steps into the gym and the Octagon.

“It’s never been easy,” he said. “A lot of people have to put the work in, and they did and they became good, but for me, to put the work in was almost like a gift. I had to do a lot of work to put in the work. And I will never forget that.”