Road to UFC 200: The Showstoppers

With three cards stacked from top to bottom over three consecutive nights in July, the 2016 edition of UFC International Fight Week is on track to be the biggest and best ever.

But what about those who aren’t initiated yet, the casual sports fans who aren’t sure whether they want to invest the time or effort into checking out the fastest growing sport in the world? Those folks need a reason to tune in or buy a ticket. So here are a dozen reasons. These are the fighters that never disappoint. 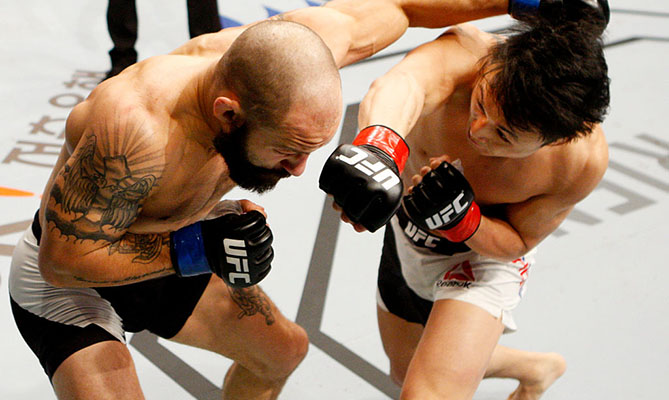 Featherweight prospect Dooho Choi has ended 10 of the 12 fights on his current winning streak via knockout. That’s enough to earn him a spot on this list, but consider that in his most recent win over Sam Sicilia, he was willing to trade with one of the hardest punchers in the sport. And he won – by knockout – in 93 seconds. Thiago Tavares will be a tough test next month, but “The Korean Superboy” looks like he’s the real deal. 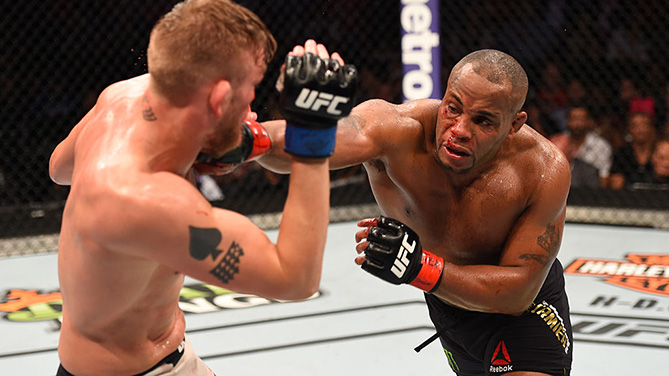 Watching a former Olympian compete in the Octagon is always a good thing, but seeing Daniel Cormier do it has provided even more thrills. From beating heavyweights in his early UFC days to winning the light heavyweight crown in 2015 and successfully defending it in a war against Alexander Gustafsson, Cormier hasn’t been the type of champion that just runs through people. He’s faced adversity and hasn’t always had an easy road. But with the exception of his first fight with Jon Jones, “DC” finds a way to win, and on July 9, he can settle that score with “Bones.” 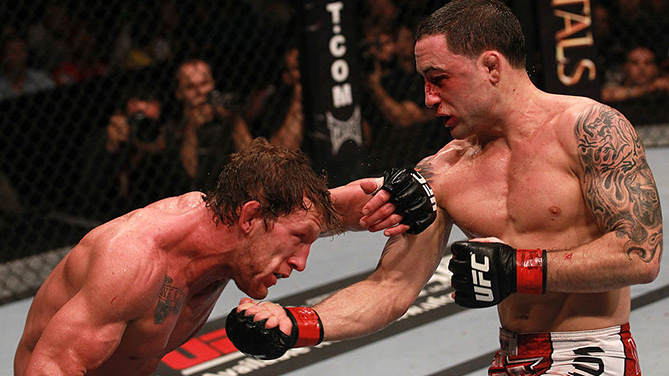 Frankie Edgar may only be 145 pounds, but he’s got a heavyweight heart, and a determination that’s second to none. When I think of the former lightweight champion and current featherweight contender, I like to steal Larry Merchant’s line about the late, great Joe Frazier. Merchant called “Smokin’ Joe” a truth machine. In other words, Frazier was going to find out the truth about you in a fight, what you really had on the inside. Edgar is that guy in MMA. 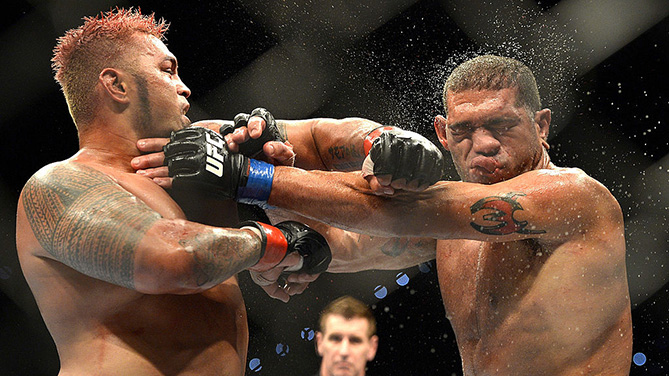 The King of the Walk-off KO, Mark Hunt is a thrill to watch simply because one of his fights can end in a split second if he lands a punch on you. It doesn’t matter whether it’s the first minute of the first round or the 15th minute of the third, “The Super Samoan” is a danger man at all times, making it impossible to turn away when he’s in the Octagon.

Watch Hunt vs. Silva I 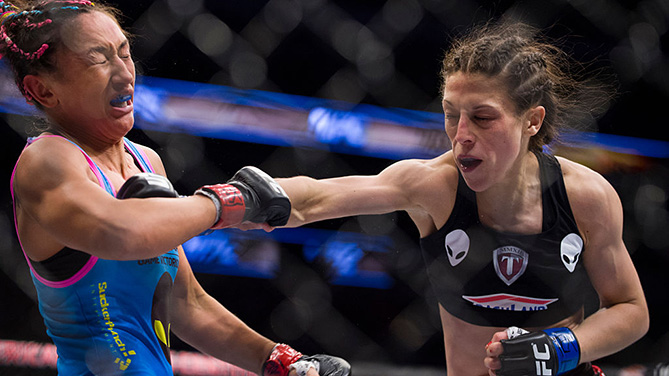 Everybody loves Joanna Champion. Well, maybe not her July 8 opponent, Claudia Gadelha, but pretty much everyone else has become a fan of the women’s strawweight champion, and not just because she’s a sneakerhead with a seemingly perpetual smile on her face (when not around an opponent, of course). It’s because when she fights, she does so with an intensity and striking precision that is beautiful to watch as long as you’re not on the receiving end of her punches and kicks. Jedrzejczyk is a world-class striker, and it’s always worth tuning in to see that. 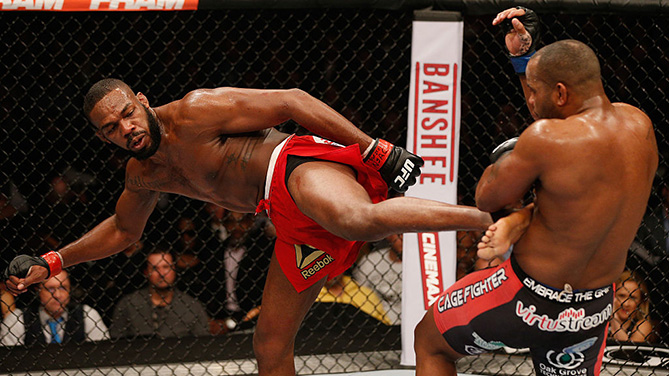 As early as his second UFC fight against Stephen Bonnar in 2009, it was clear that Jon Jones was a special fighter. More than seven years later, he has proved to be one of the greats, and he can add to his resume if he can defeat Daniel Cormier a second time at UFC 200. So why should you care? If you’re a fan of anything, getting a chance to watch the elite do what they do should be an opportunity seized. Jon Jones is elite and he may be in his prime now. So don’t miss him. 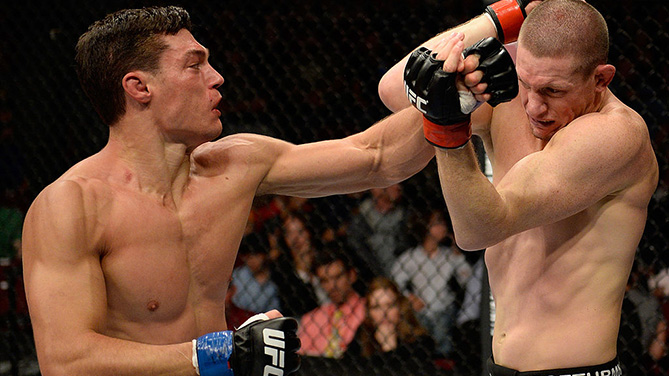 Welterweight prospect Alan Jouban has a problem. He can win fights on his talent and technique and make things easy on himself, but once he gets hit, it usually becomes a brawl. That will give his coaches gray hair, but it’s also made “Brahma” a fan favorite. Let’s put it this way: the greatest compliment I can give the Louisiana native, who has made a name for himself away from fighting as a model, is that he doesn’t fight like someone looking to protect his face for the next photo shoot. 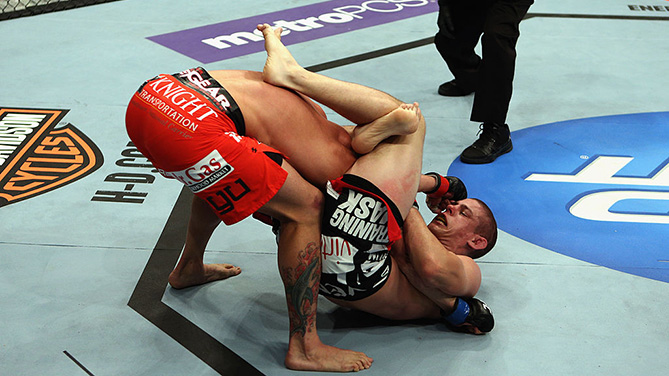 One man in the UFC has more post-fight bonuses than Joe Lauzon, and that’s his fellow Ultimate Fighter 5 cast mate, Nate Diaz. One - in all of UFC history. That should tell you all you need to know about New England’s finest, a fighter whose sole intention when the Octagon gate closes is to get you out of there as quickly as possible. And while some who say that often fade when the going gets tough, Lauzon has had enough back and forth wars to let you know that whether it’s a quick sub or a 15-minute scrap, he’s down for all of it.

I’ve always been a fan of Derrick Lewis thanks to his fight night intention of getting an opponent out of there as soon as possible. But when he told me that the lone submission win of his career was a mistake because he knew his opponent would want a rematch, that’s when “The Black Beast” hit the all-time favorites list. And not too many – if any – of his knockout victims have asked for a return bout. 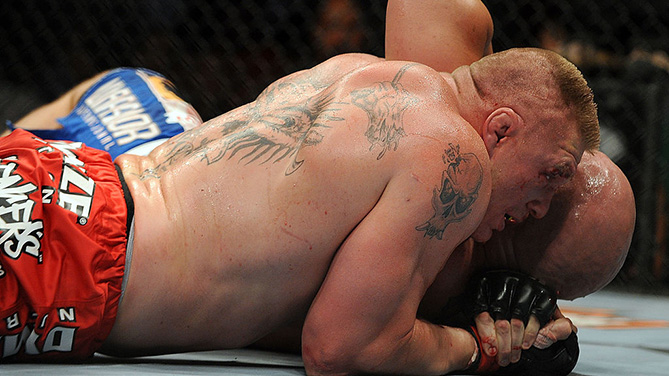 At 6-3 ½, 265 pounds, Brock Lesnar is what a heavyweight should look like. Imposing, intimidating, and with fists the size of lunchboxes. And I don’t know what it is, but when Lesnar is about to fight, he brings those pre-fight butterflies that let you know something memorable is going to happen. He did it his first time around in the UFC, and I know it’s going to happen again at UFC 200 when he faces Mark Hunt. Lesnar has star quality, and that’s something not everyone has. In fact, few have it like this former heavyweight champ. 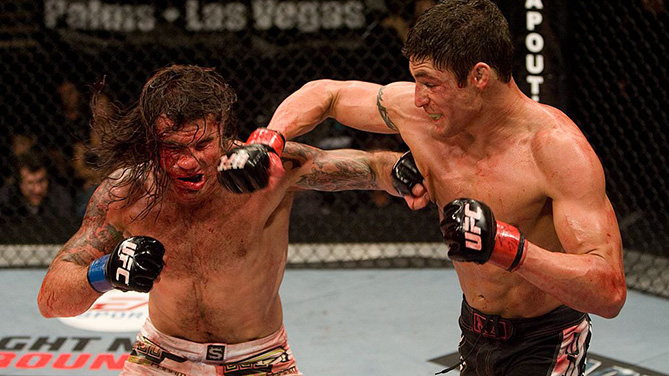 Well look who’s here. Now you know why Diego Sanchez’ fight with Joe Lauzon is a diehard fan’s dream fight. There is guaranteed action here on the stacked UFC 200 card, and while the reputation of both fighters is enough to make this a must see, the reality is – as in every Sanchez fight – that at one point, Albuquerque’s “Nightmare” is going to bite down on his mouthpiece and start throwing bombs with no regard for the consequences. Let’s just say Sanchez knows how to make an impression. 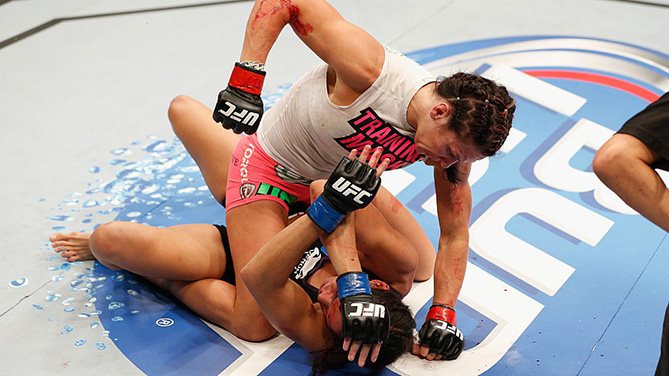 Cat Zingano may have lost her most recent fight to then-women’s bantamweight champion Ronda Rousey, but let’s just call that a bad night against one of the sport’s greats. For our purposes here, I’d like to look at her two pre-Rousey bouts. In those fights, Zingano defeated the two ladies fighting for the 135-pound title at UFC 200, champion Miesha Tate and challenger Amanda Nunes. Did I mention that she knocked both of them out? Oh yeah, and both were come from behind wins. So Zingano is a knockout artist who usually overcomes adversity before winning? Count me in.