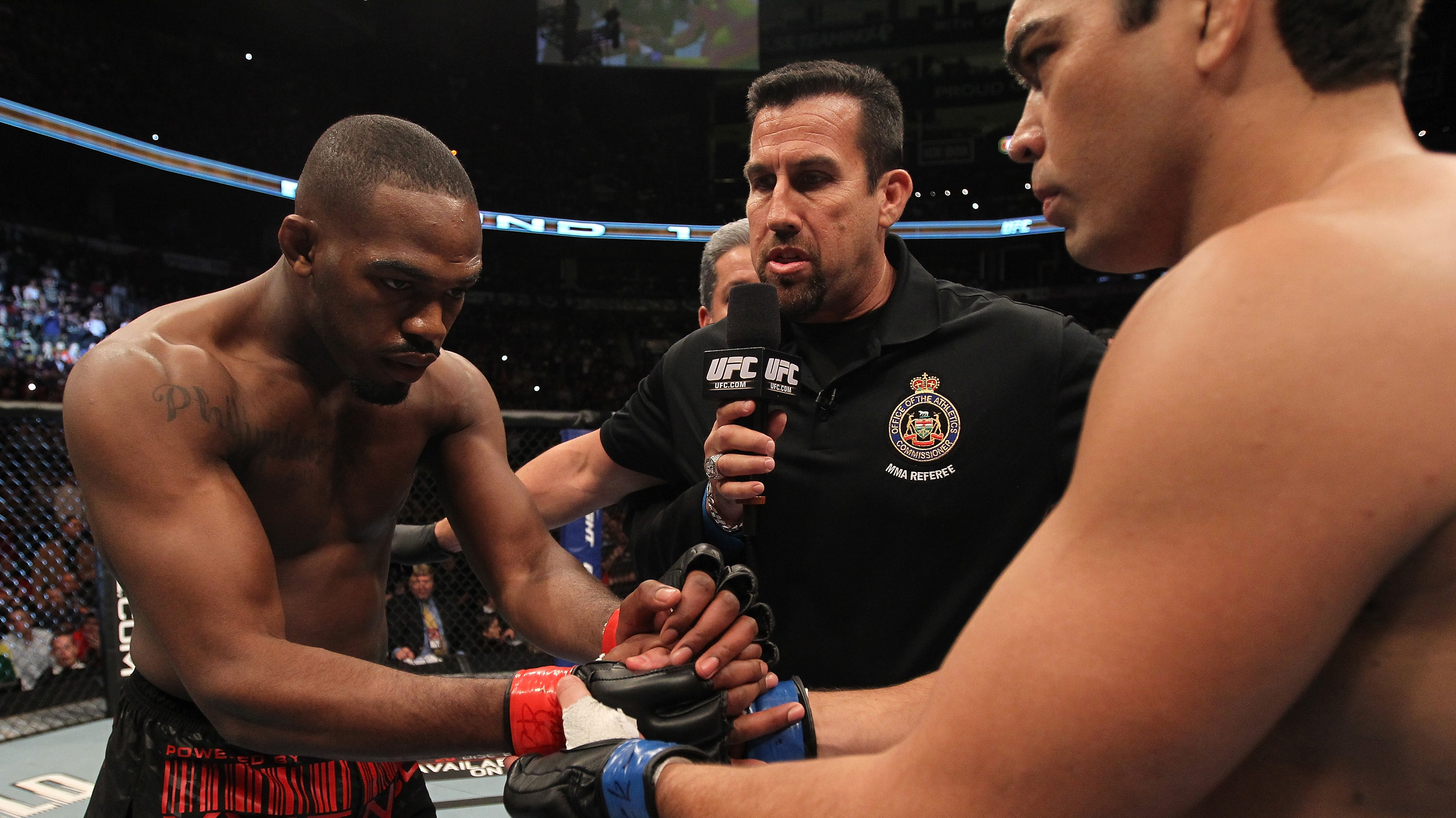 John McCarthy is perhaps the most iconic referee in all of combat sports, but after officiating his first UFC event in March of 1994, he had already had enough.

An LAPD officer, McCarthy was in love with combat sports seemingly from the time he was in diapers. And after training in boxing, wrestling, and jiu-jitsu (which he studied under Rorion Gracie), the idea of seeing all the disciplines mixed together was something he couldn’t refuse.

“I had always been a huge boxing proponent, I had boxed myself, and from the time I was five years old, my dad would take me at least once a month to the Olympic Auditorium to watch the fights,” he recalled. “He put me in boxing because I loved boxing, and then I started wrestling and they were different and I loved wrestling, but it was always considered that the toughest guy on the face of the planet was the heavyweight champion. And when I saw it all mixed together, I thought everyone would fall in love with it.”

They did, with the first UFC event in November of 1993 captivating the world, not just due to its no holds barred focus, but because a skinny kid from the Gracie family, Royce, won the entire tournament, upsetting the field and introducing everyone to his family’s then-mysterious art.

“I can’t say for sure that it wouldn’t continue, but I don’t think it would have grabbed people the way it did if Royce wasn’t the guy,” McCarthy said of that first event. “Royce is not a small guy, but he was perfect in that he didn’t even look like an athlete. He’s strong, but he’s super thin, and it’s because he won that I think people said ‘whoa, you’ve got to see this.’ If Ken Shamrock had won, a lot of people would have looked at it and said ‘well, look at him.’ So I think it had a lot to do with it taking off.” 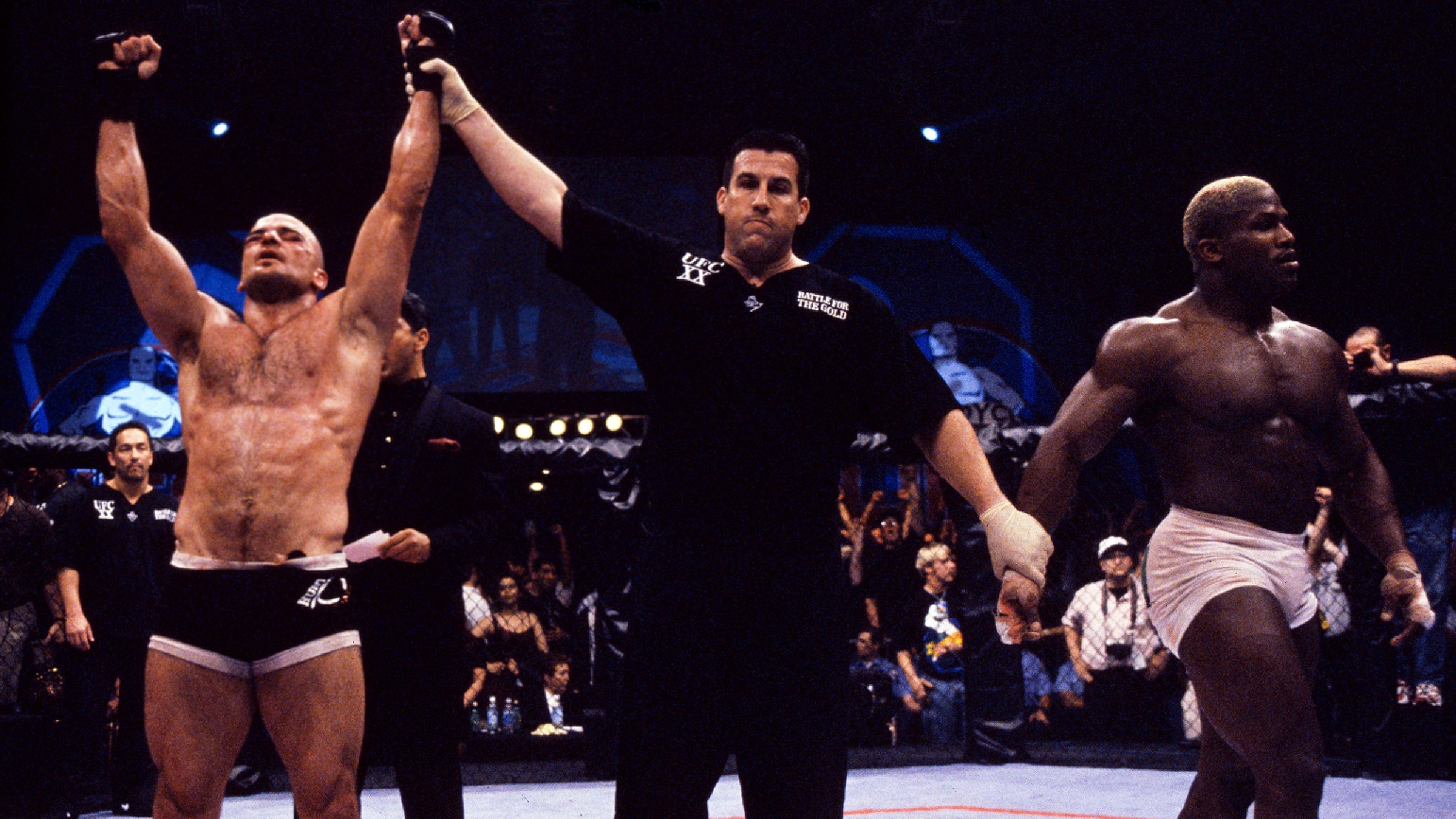 At Rorion’s school in California, pre-UFC enrollments likely maxed out at the 120 student mark. A week after the first event, it shot up to 500 students, and the week after that, a thousand. But for McCarthy, the key moment of that first event happened in the opening fight, a meeting between Gerard Gordeau and Teila Tuli which ended seconds in thanks to a kick to the face that took out three of Tuli’s teeth, one flying into the crowd and the other two imbedded in Gordeau’s foot.
JON JONES TALKS MCCARTHY ON UFC UNFILTERED PODCAST

After this kick, referee Joao Barreto stopped the fight, something he wasn’t supposed to do under the rules (or no rules) of the event.

“The referee didn’t have the power to stop the fight under the original rules, which is absolutely stupid,” said McCarthy, who was then recruited by Rorion to referee the second event in March of 1994.

“Honest to God, one of the reasons he said why he picked me was ‘John, you don’t mind seeing people get hurt,’” he laughed, and as the card at Mammoth Gardens in Colorado began, McCarthy figured this was the easiest night’s work he’d ever had.

“The first fight was Sean Daugherty vs. Scott Morris,” he said. “Scott Morris submits him in 20 seconds, neck cranks him and he taps. The next one if a guillotine choke, and I’m thinking, this is easy. But from that point on, my life was a living hell. I was scared to death because I wasn’t supposed to stop this thing.” 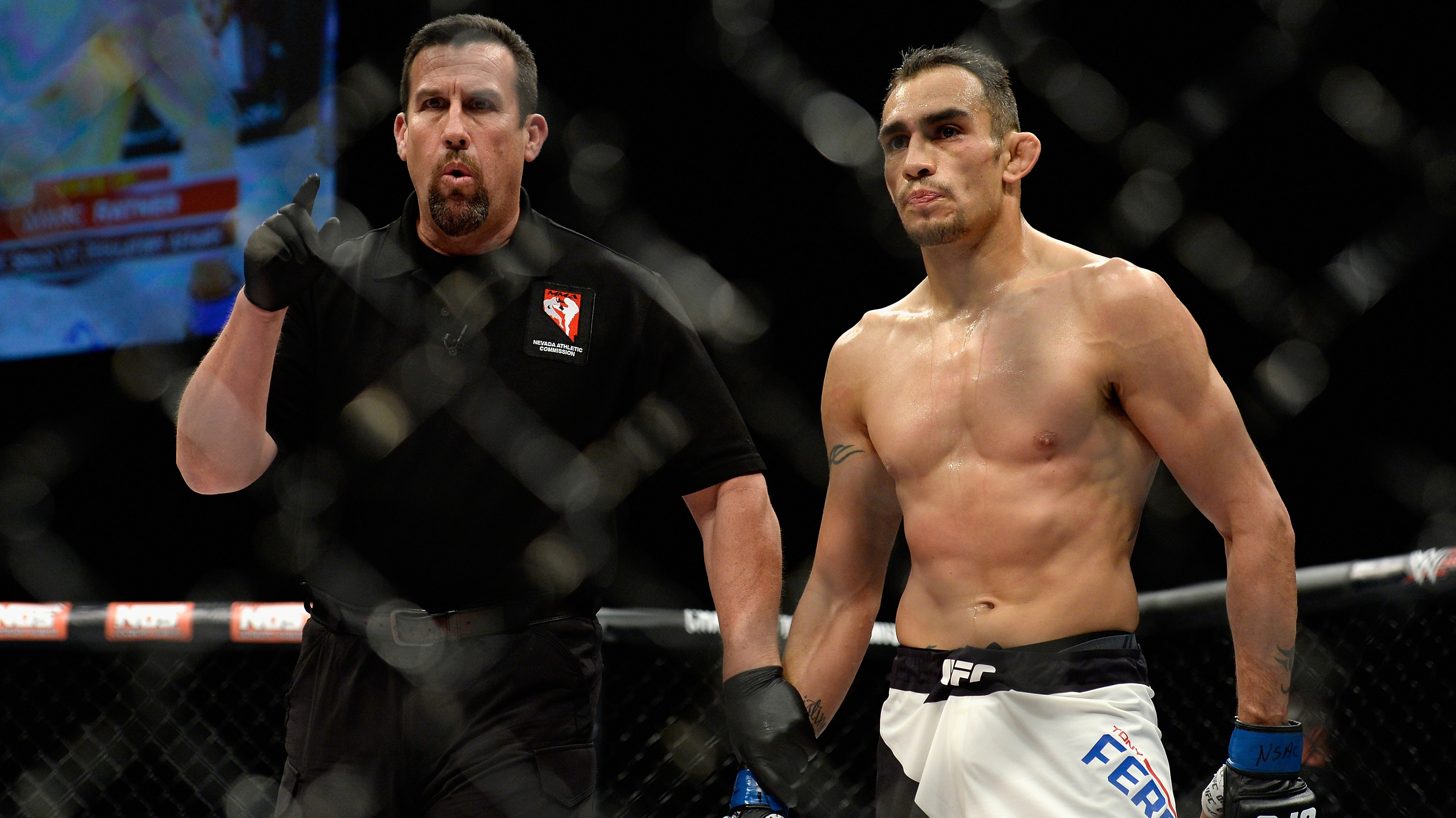 When it was over, McCarthy was frazzled and told Gracie he was done.

“I can’t stand there and let someone get beat to death while I stand there looking stupid,” he said. “If someone cannot defend themselves, I have to be able to stop the fight. He finally agreed to it and I did number three, but I was mortified in the beginning.”
DANIEL CORMIER TALKS MCCARTHY ON UFC UNFILTERED PODCAST

With the ability to stop fights if a competitor was unable to intelligently defend himself, McCarthy became a staple in the Octagon, with his no nonsense presence and “Let’s get it on” call to battle trademarks he retains to this day. But his role in UFC history is more than just an iconic one, as he was a key reason why the spectacle eventually turned into a sport, with his rule suggestions and eventual implementation not a product of nightly tape watching sessions (though there were those too), but of seeing what was happening on fight night and basically adjusting on the fly for the next event.

“Every show, something would happen, and we would make a rule about it or I would learn something where I said don’t ever do this, don’t ever do that,” he said. “It was a progression, and luckily, over time, things evolved, and by the grace of God, if he’s up there caring about mixed martial arts, he saved us because all it would have taken was one of those early fights to have someone get seriously hurt or die and it would have been over. Luckily, nothing happened.” 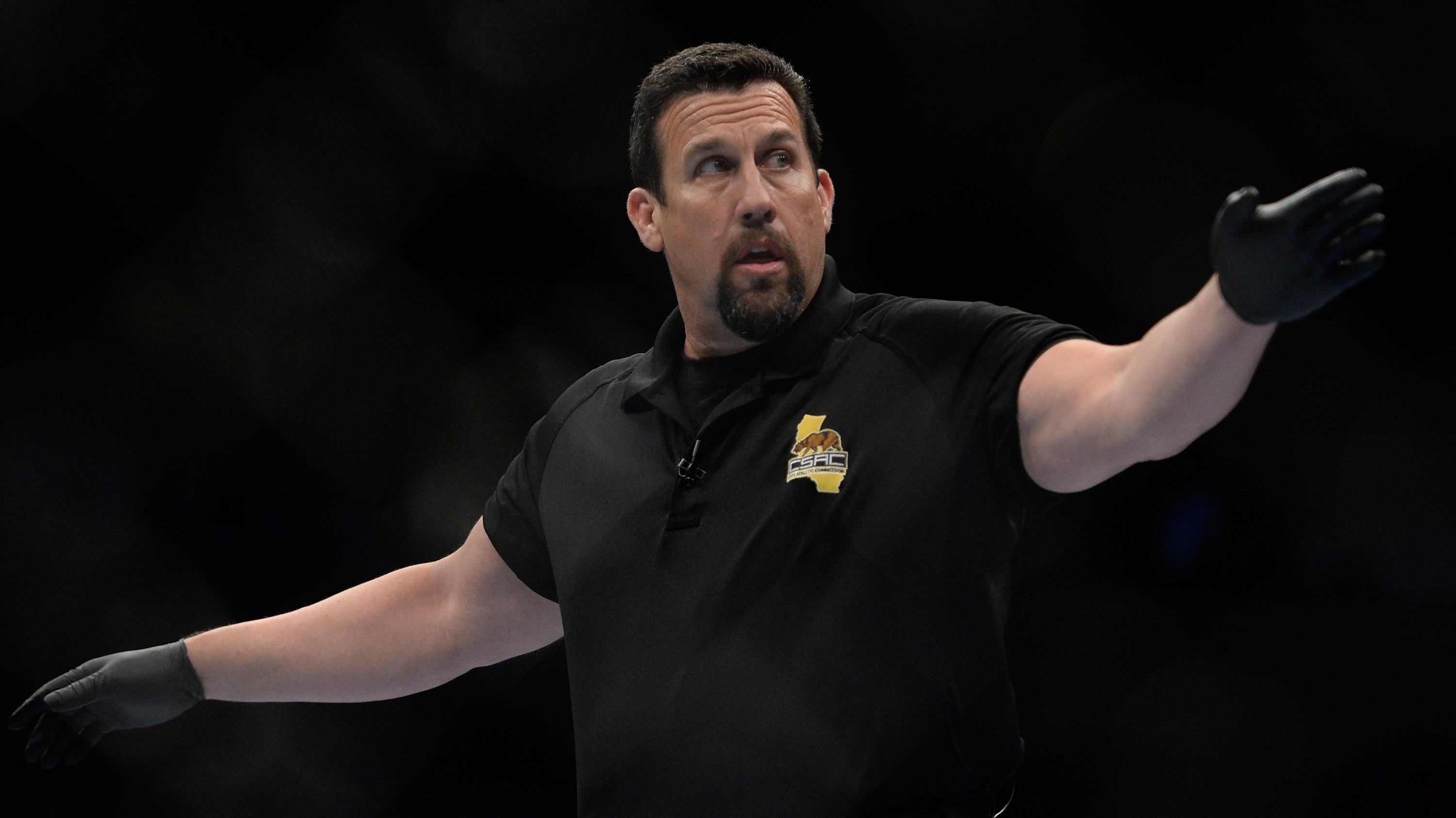 As one example of a rule McCarthy made law, take the forbidden maneuver of fish hooking.

“I see Tank Abbott sticking his fingers into Oleg Taktarov’s mouth, trying to pull his lips apart, and when I was a kid, my dad got into a fight at Dodger Stadium,” said McCarthy. “There was a guy that was cutting people with a box cutter and there was this big donnybrook. So he (McCarthy’s father) picks this guy up and slams him into the seats and when he comes up he picks him up by the mouth and he pulls and he tears him across from his lower lip and all the way up to his eye. I was like 10-11 years old and I asked him what that was. He said ‘fish hooking, never do it.’ (Laughs) And that was that. So when I saw Tank Abbott, I go, that’s fish hooking, you can’t do that. I tell Bob (Meyrowitz) about it after the show and let him know that the only way to defend it is to bite, and we don’t allow people to bite, so we can’t allow people to fish hook.’ So we made it a rule.”

Today, the unified rules of mixed martial arts exist to regulate the sport and protect the fighters, with the ones in charge of enforcing those rules being guys like Big John McCarthy. And all these years later, the thrill is still there just before that opening bell sounds.

“The excitement’s always there,” he said. “Come on. If you’re not excited by this sport, you’re dead.”