Road to UFC 200: The Greatest Submissions

Sudden or methodical, technical or power-driven, there’s nothing like a submission to get fans up and cheering on fight night. It’s the finish that separates MMA from boxing, and this added dimension is a big reason why the sport continues to grow in popularity. As the road to UFC 200 continues, here’s a look at a selection of the best subs ever seen in the Octagon. 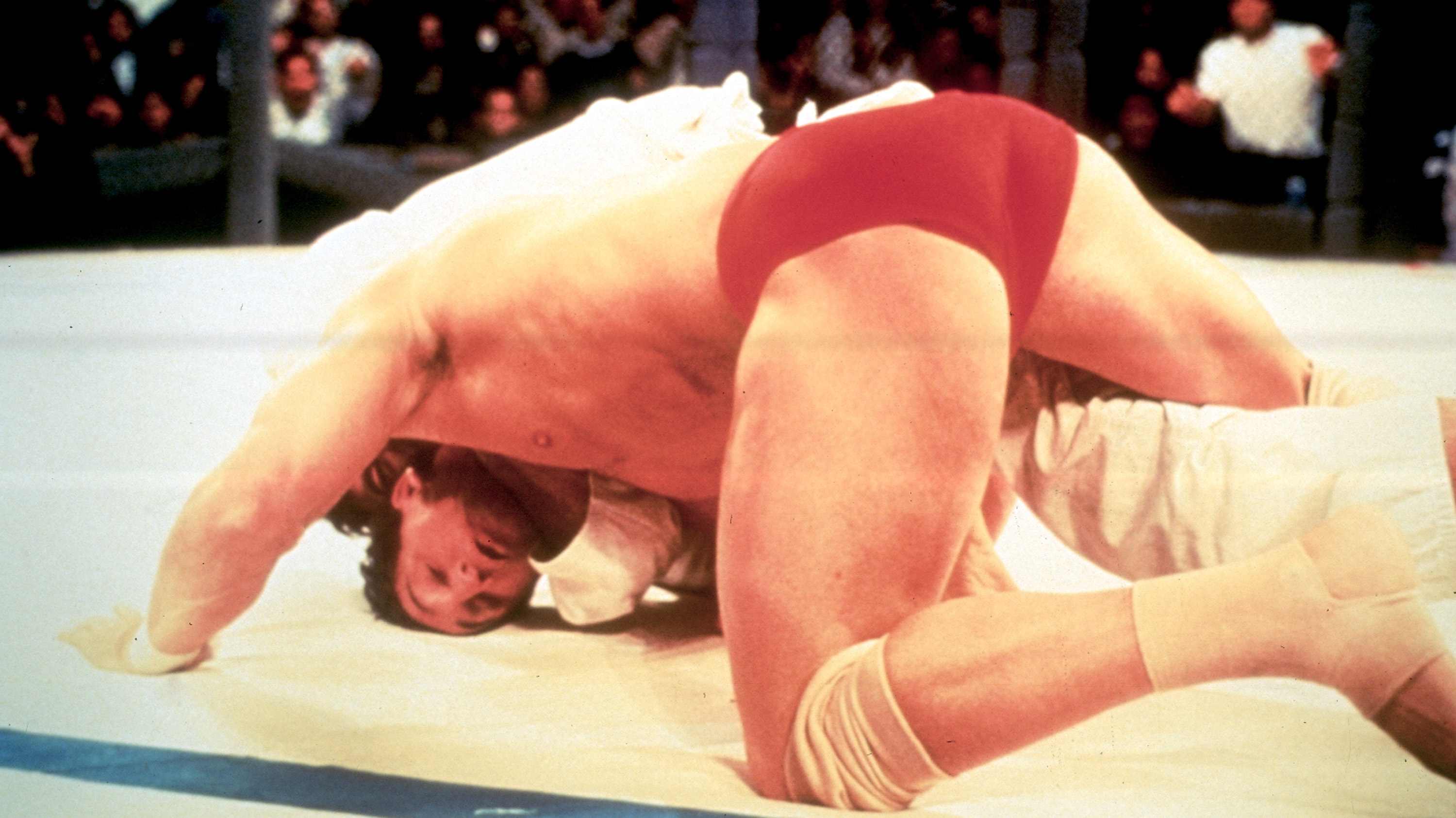 UFC 1 - Royce Gracie-Ken Shamrock I
When Royce Gracie submitted Art Jimmerson in the first UFC tournament in 1993, observers were confused. When the skinny gi-wearing Brazilian did the same thing to the imposing Ken Shamrock, this time by rear-naked choke in just under a minute, a sport was born, and suddenly every martial artist wanted to learn jiu-jitsu. This is where it all began.

UFC 4 - Royce Gracie-Dan Severn
After winning two of the first three UFC tournaments, Royce Gracie was the undisputed king of MMA. But after two big wins at UFC 4, Dan Severn was a serious threat to the crown, and he looked to be putting the finishing touches on his coup d’etat before Gracie pulled off a triangle choke that turned the tables after nearly 16 minutes of combat. 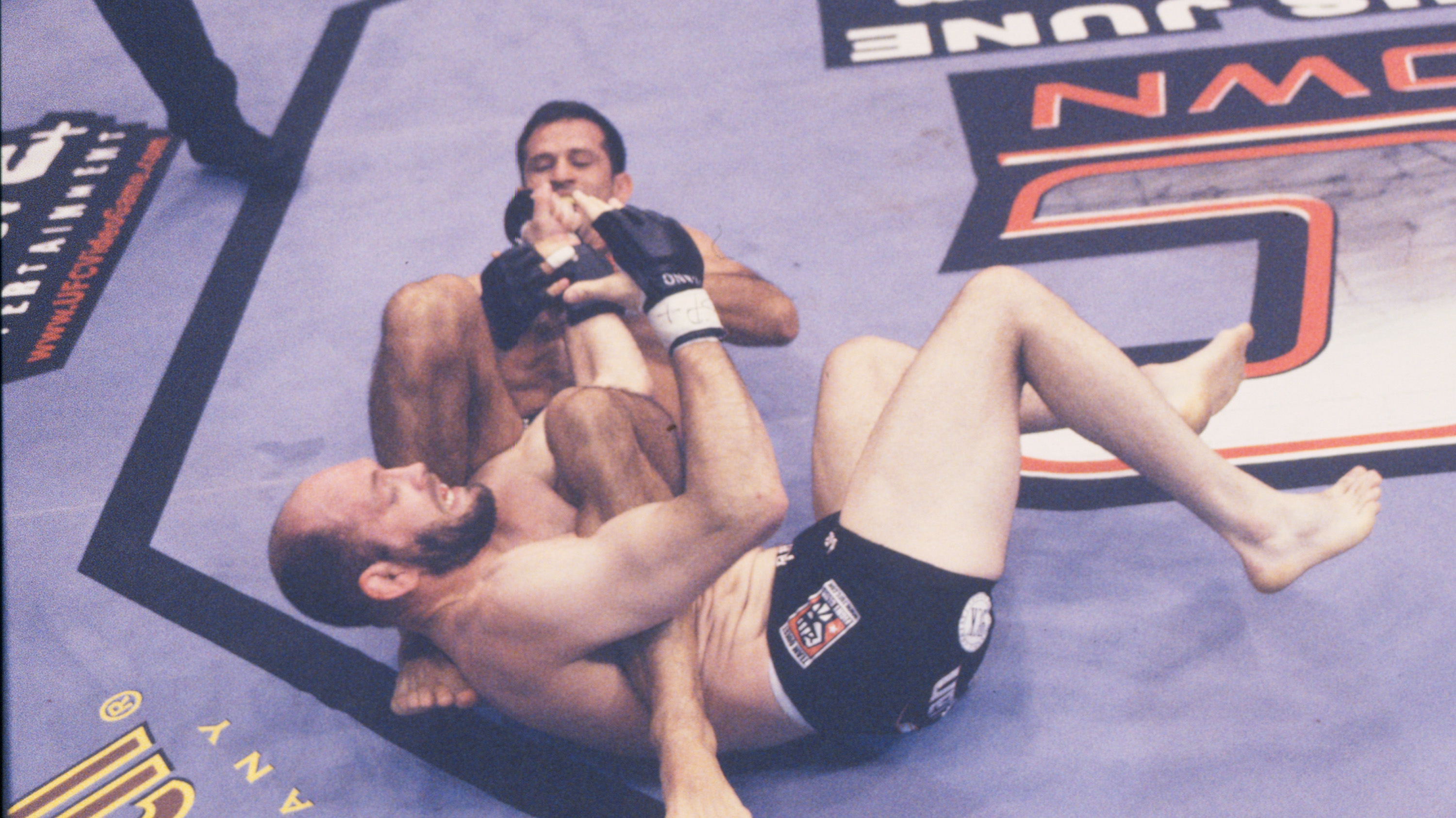 UFC 37 – Murilo Bustamante-Matt Lindland
We should probably give Murilo Bustamante two spots on this list, considering that he submitted Matt Lindland twice in the same bout. And while Bustamante’s armbar finish was disallowed because Lindland claimed that he didn’t tap, in the third round the middleweight champ did finally end things with a guillotine choke. 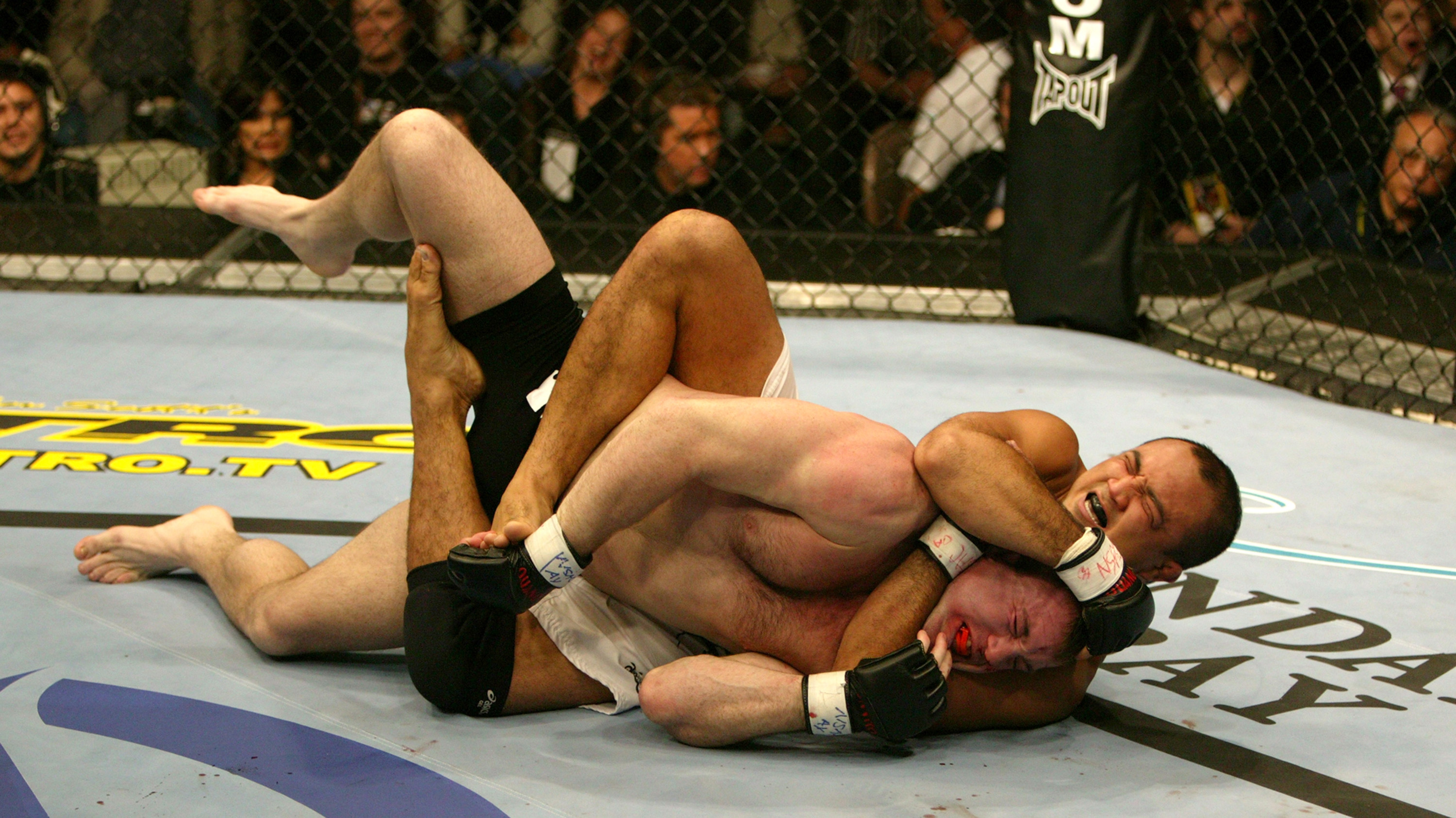 UFC 46 - BJ Penn-Matt Hughes I
Riding a 13 fight winning streak that included six victories in UFC title fights, welterweight champion Matt Hughes was understandably being referred to as invincible. But former lightweight BJ Penn wasn’t called ‘The Prodigy’ for nothing, and the confident Hawaiian shocked the world with a rear naked choke submission of Hughes at UFC 46. 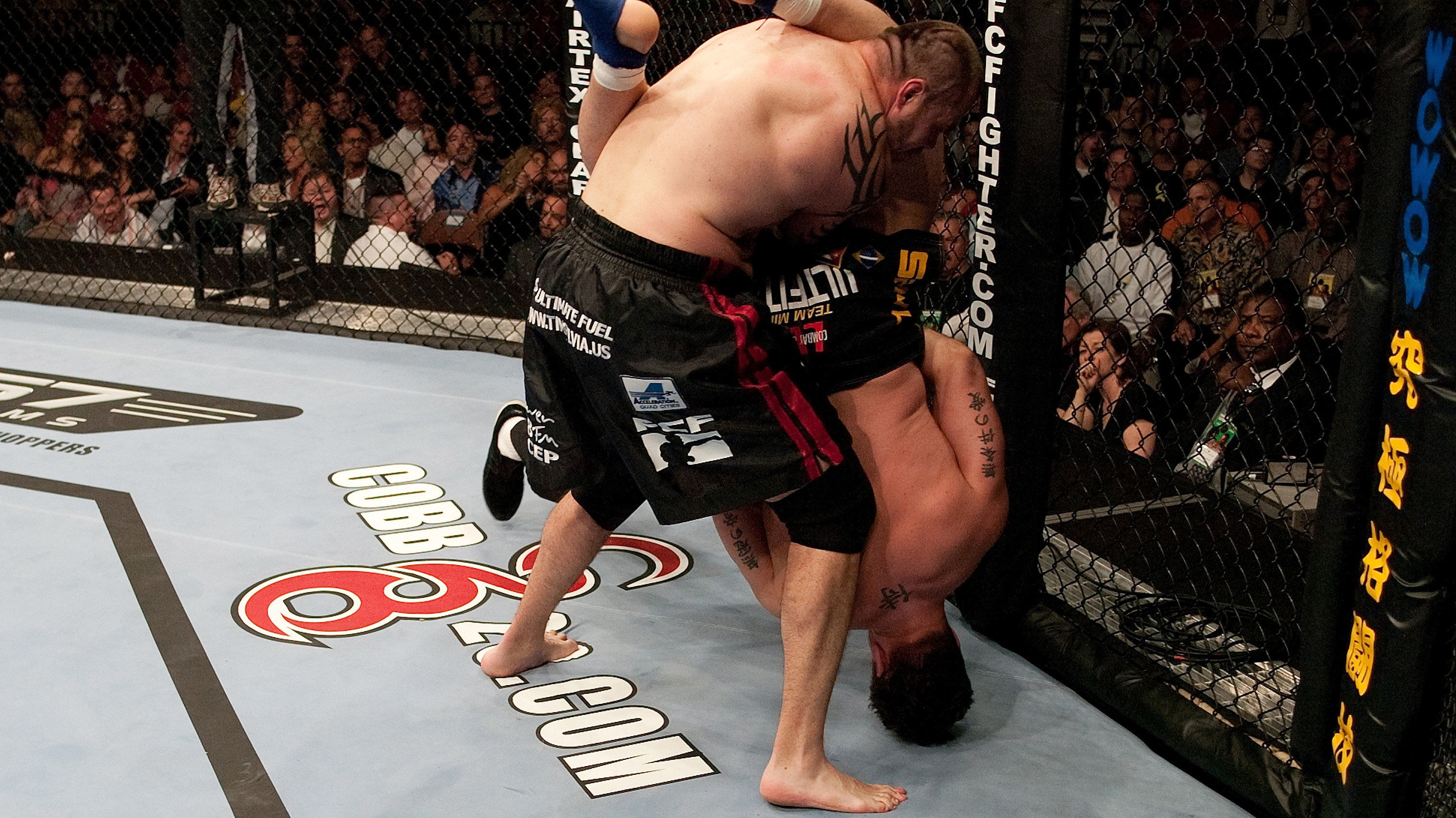 UFC 48 – Frank Mir-Tim Sylvia
Remember the way a prime Mike Tyson approached his fights when he was the heavyweight boxing champion? Well, Frank Mir attacked submissions the way Tyson sought knockouts – he wanted to take an arm or leg home, and he almost got his wish against Tim Sylvia when he broke his opponent’s arm with an armbar to earn the UFC heavyweight crown in 2004.

UFC 50 – Matt Hughes-Georges St-Pierre I
Nine months after losing his welterweight title to BJ Penn, Matt Hughes got the opportunity to wear gold around his waist once again when he took on Canadian phenom Georges St-Pierre for the vacant belt. And though GSP soon became the future of the division, on this night, Hughes was the present as he sunk in an armbar that made St-Pierre tap with just one second left in the first round. 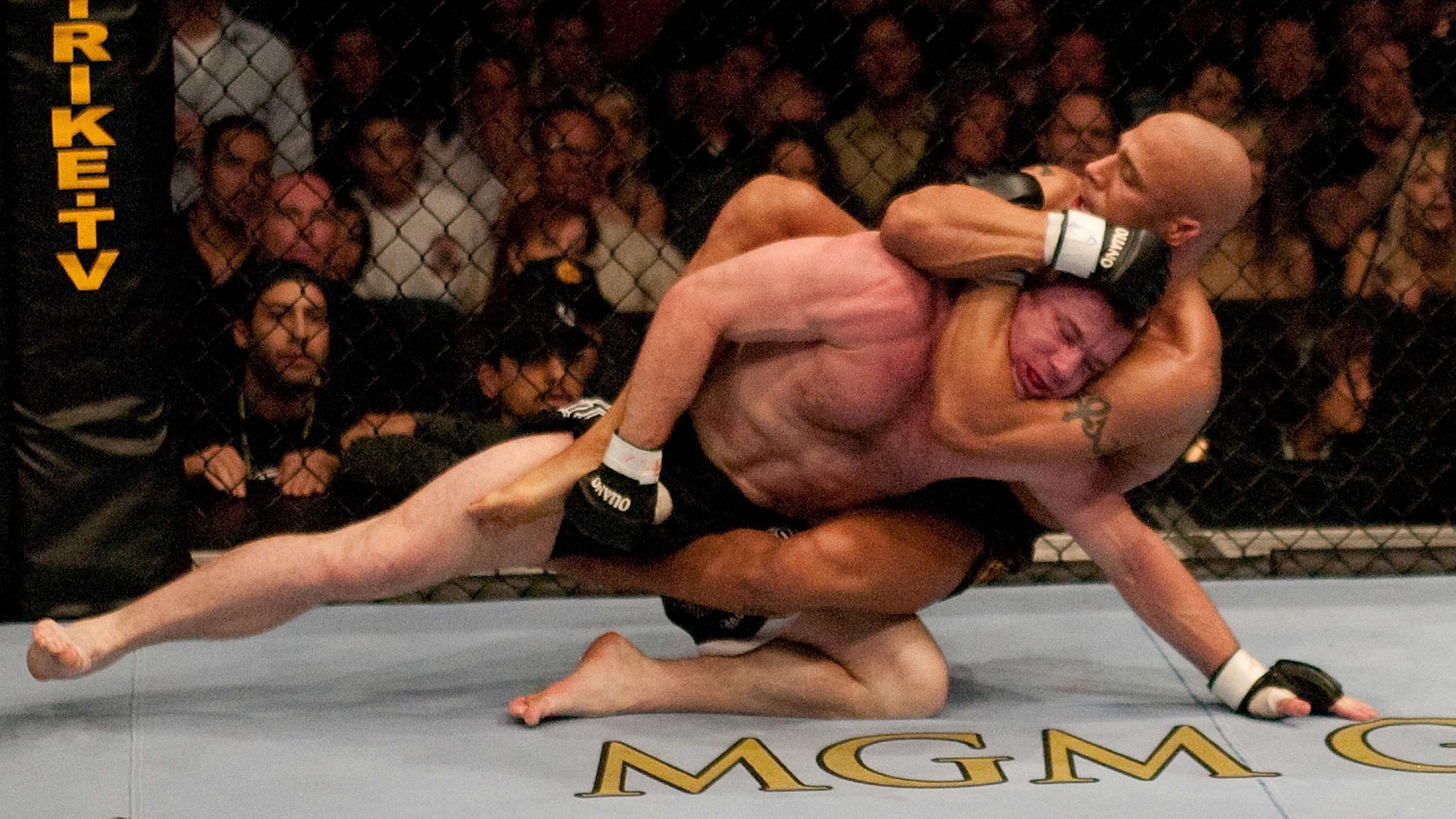 UFC 52 - Matt Hughes-Frank Trigg II
After taking an inadvertent low blow and almost getting choked out by Frank Trigg, Matt Hughes not only broke free from the hold, but he picked Trigg up, carried him across the Octagon, and slammed him before sinking in a fight-ending rear naked choke. This wasn’t just one of the greatest submissions ever; it was one of the best fights in UFC history.

UFC 81 – Frank Mir-Brock Lesnar
For a little over a minute, UFC newcomer Brock Lesnar was well on his way to one of the most impressive debuts of all-time. Yet against a crafty vet like Frank Mir, all it takes is one slip-up, and that’s just what happened to the overaggressive Lesnar, as he got caught in a kneebar that resurrected Mir’s career in emphatic fashion. 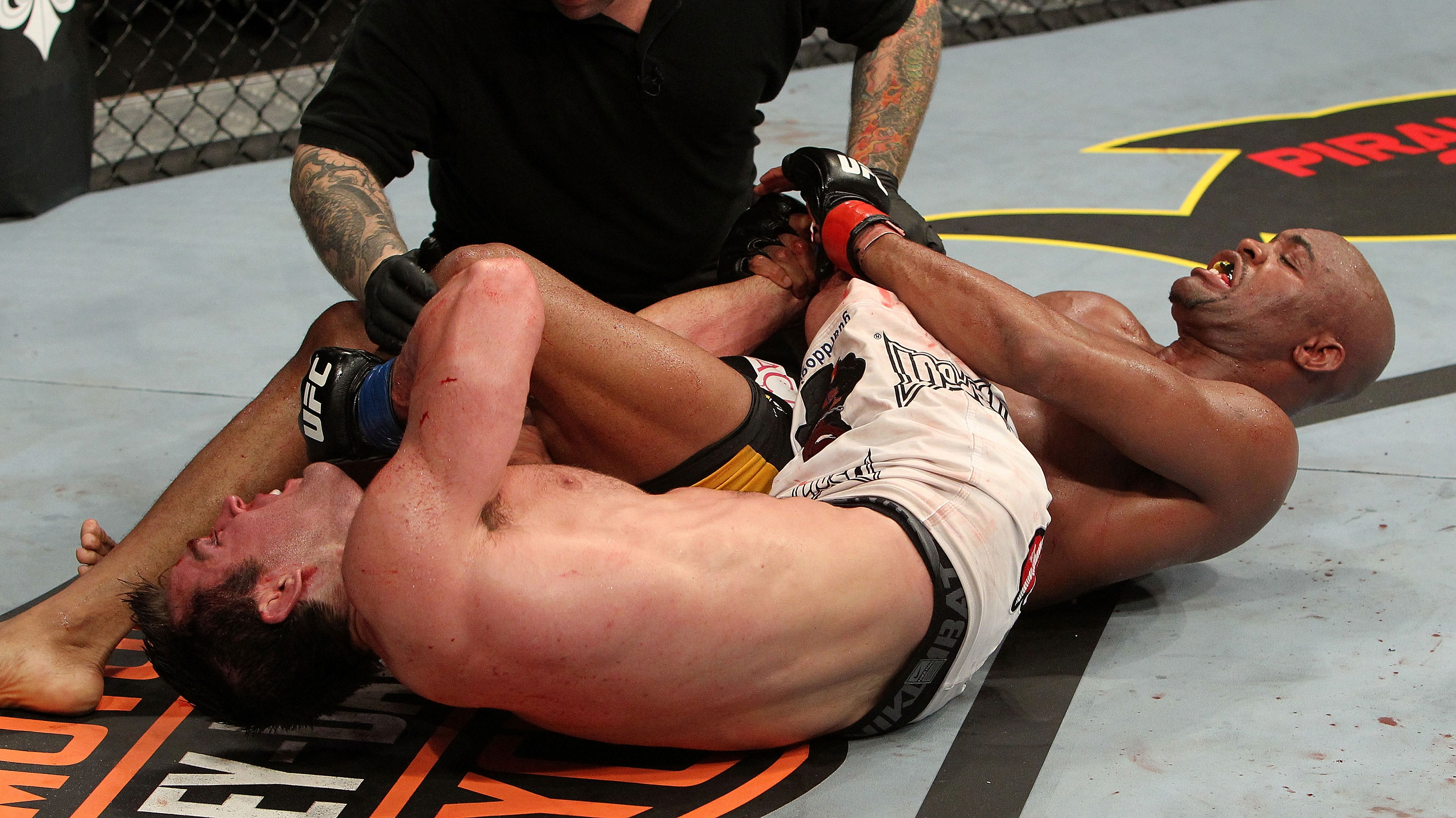 UFC 117 – Anderson Silva-Chael Sonnen
Great champions aren’t defined by their dominance, but how they react to adversity. Anderson Silva got nearly five rounds worth of punishment from trash-talking Chael Sonnen, but just when it appeared that the UFC middleweight champion’s title was slipping away, he pulled off a final round submission of Sonnen that forever etched his name in the record books as one of the sport’s best ever.

UFC 76 – Forrest Griffin-Mauricio “Shogun” Rua
Sometimes the best submissions aren’t ones that are memorable for spectacular technique or the ‘wow’ factor, but ones that live on for what they meant at that particular moment in time. When Forrest Griffin closed the show on the heavily favored PRIDE import ‘Shogun’ Rua with a rear naked choke in the final minute, it was an exclamation mark on a result no one saw coming, especially Rua, a Brazilian Jiu-Jitsu Black Belt. 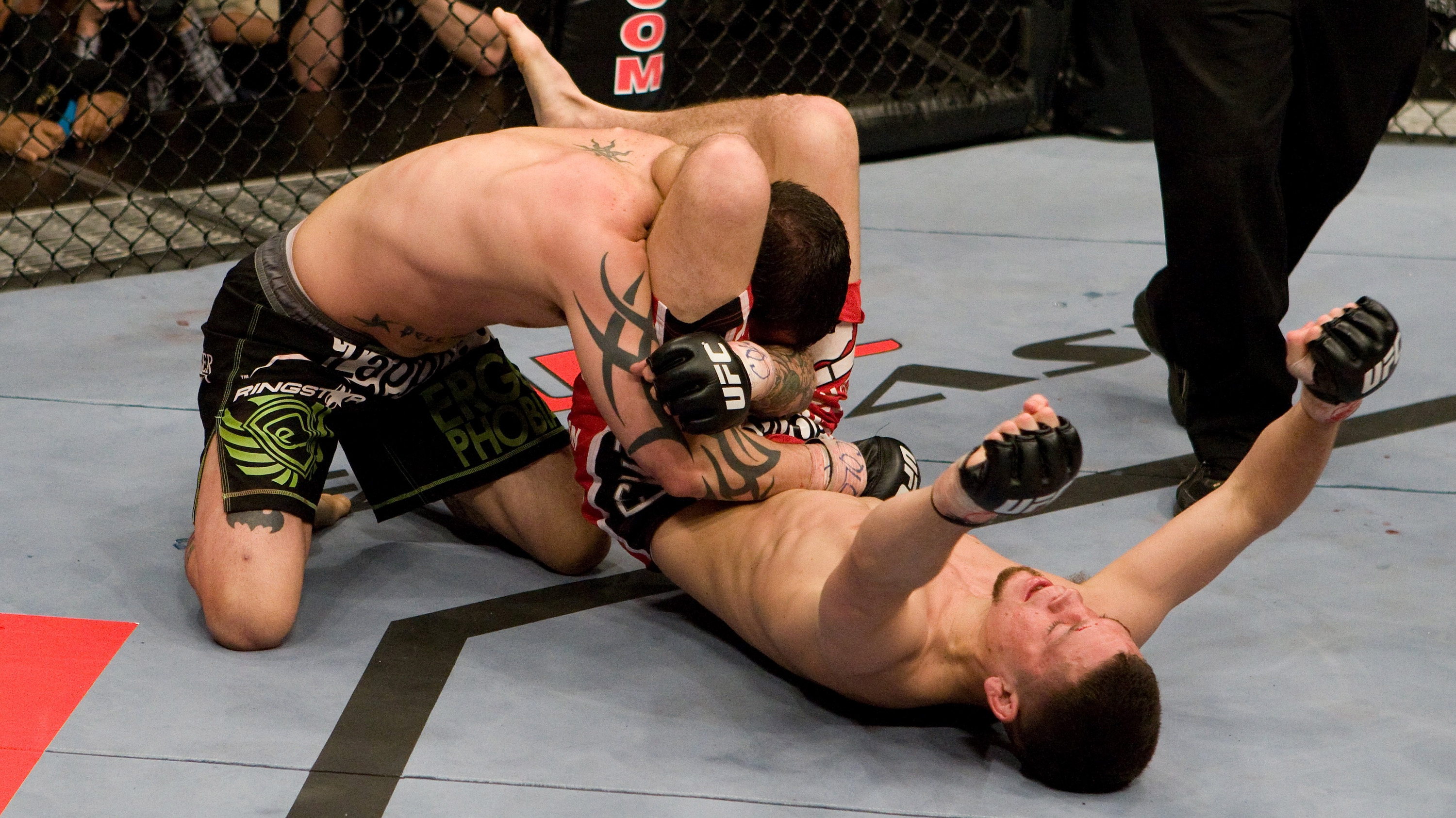 UFC Fight Night 13 – Nate Diaz-Kurt Pellegrino
A lot of fighters are great being the hammer; not so many can come back after being the nail. But after a rough first round, Nate Diaz proved that he can talk tough and walk tough as he roared back and caught Kurt Pellegrino in a fight ending triangle choke in the second while thrusting his fists in the air in triumph.

TUF 6 Finale - Roger Huerta-Clay Guida
Down on all three scorecards entering the final round, Roger Huerta turned the tables on Clay Guida in an amazing show of heart as well as skill, hurting his foe first with a knee and then finishing him off with an improbable rear naked choke that made the fans at The Palms in Las Vegas erupt. 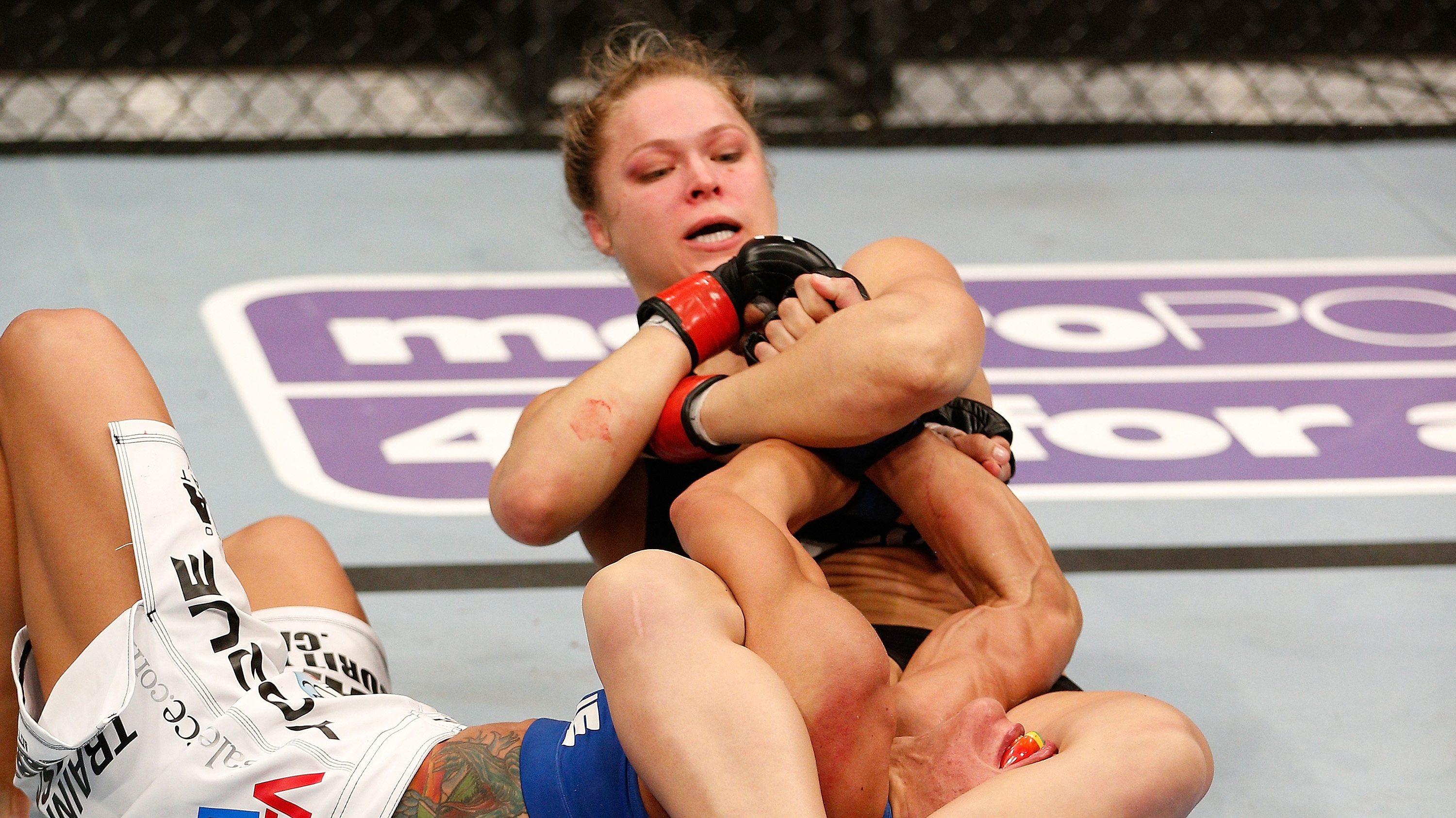 UFC 157 - Ronda Rousey-Liz Carmouche
Ever since Ronda Rousey turned pro, every opponent she faced knew that they were going to have to deal with an armbar attempt sooner or later, usually sooner. Liz Carmouche was no different, and part of her preparation for the UFC 157 bout against the women’s bantamweight champ involved defending random armbar attempts by her teammates at every possible moment. Yet when Rousey made her move on Carmouche after surviving a rear naked choke attempt moments earlier, the Marine Corps veteran got caught and finished by the armbar. If there’s a better finishing move in all of combat sports, I’d like to know about it. 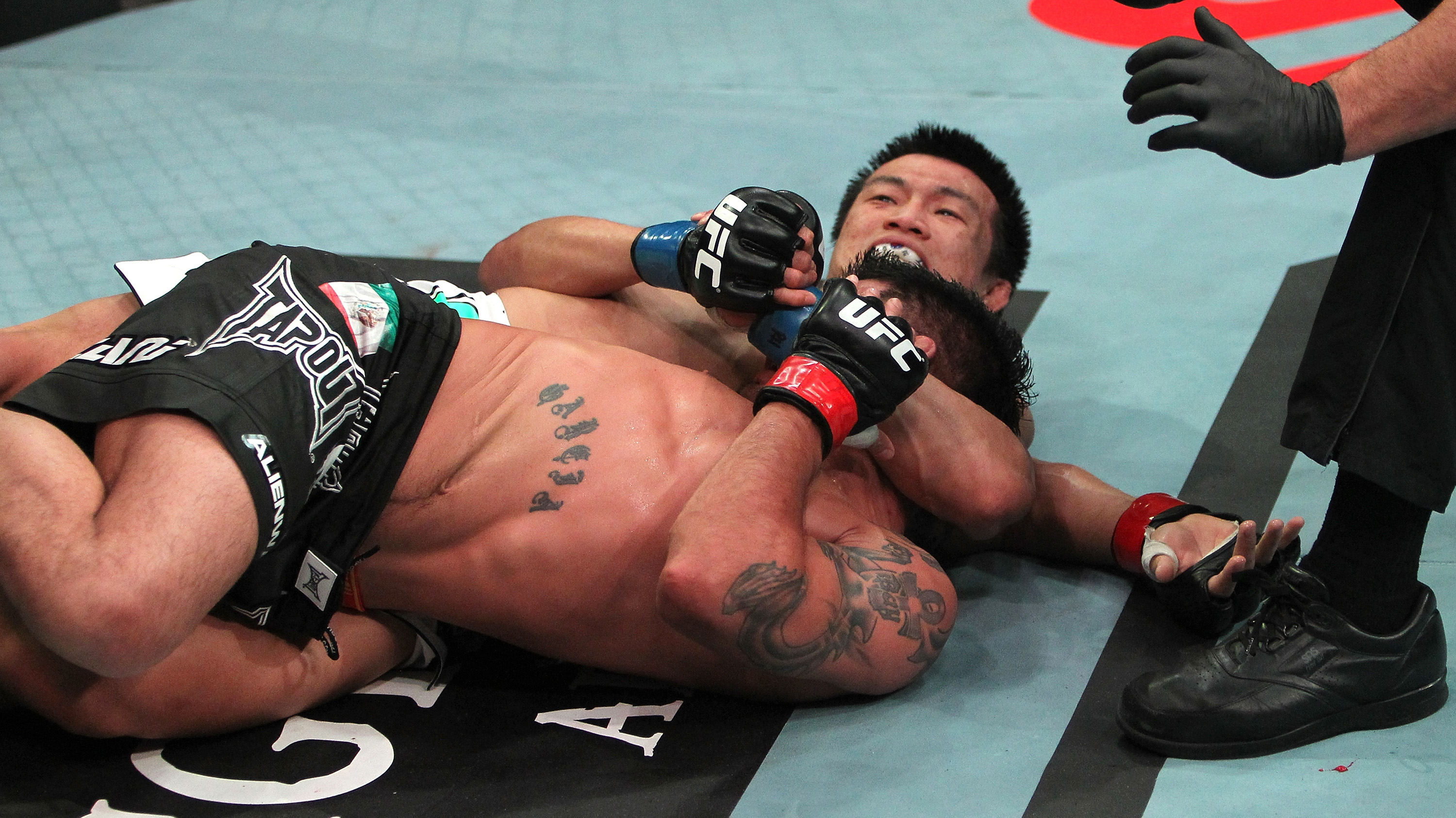 UFC Fight Night 24 - Chan Sung Jung-Leonard Garcia II
Before Chan Sung Jung’s March rematch with Leonard Garcia, you might have assumed that the fight game of “The Korean Zombie” started and finished with his ability to brawl. Maybe Garcia, who defeated Jung in their classic 2010 bout, figured the same thing. He might have even thought that he was safe as the seconds wound down in round two in Louisville in 2011. But that’s when Jung struck with Eddie Bravo’s “Twister,” a painful maneuver that had never finished a fight in the UFC – well, up until Garcia’s tap out at 4:59 of the second round. It was a beautifully executed move, and a historic one. 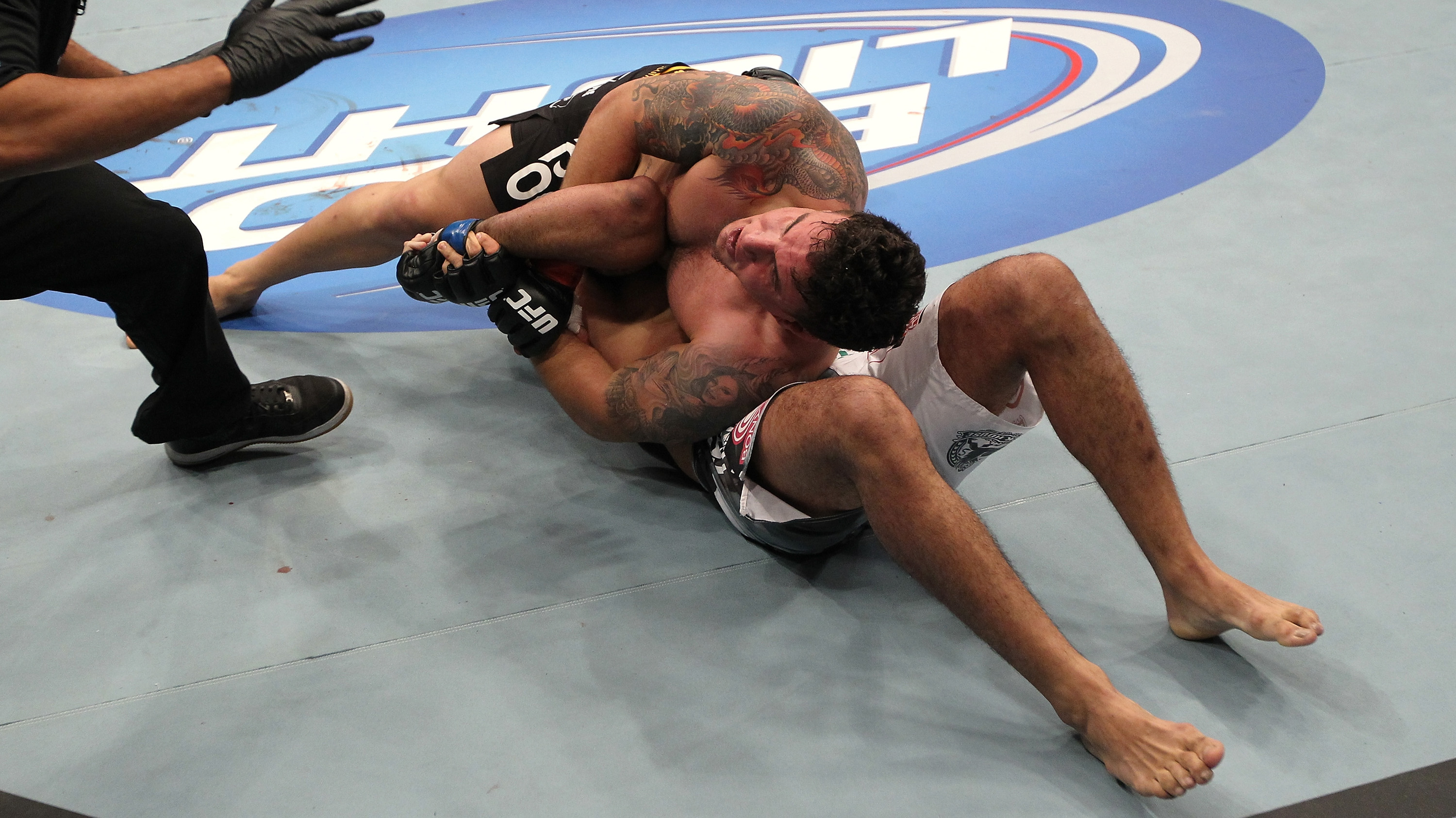 UFC 140 - Frank Mir-Minotauro Nogueira
There is a small school of believers that think a knockout is more devastating than a submission. Frank Mir does not go to that school. In December of 2011, he proved it again, becoming the first man to submit former PRIDE / UFC champ Minotauro Nogueira. To do that while one hundred percent is impressive; to do it after getting buzzed and almost finished by one of the greatest heavyweights of all-time takes it to another level.