Over the last few weeks, the road to UFC 200 has taken us through the history of the UFC while celebrating some of the sport’s most notable figures. Today, we look at a selection of the most spectacular knockouts to take place in the Octagon. 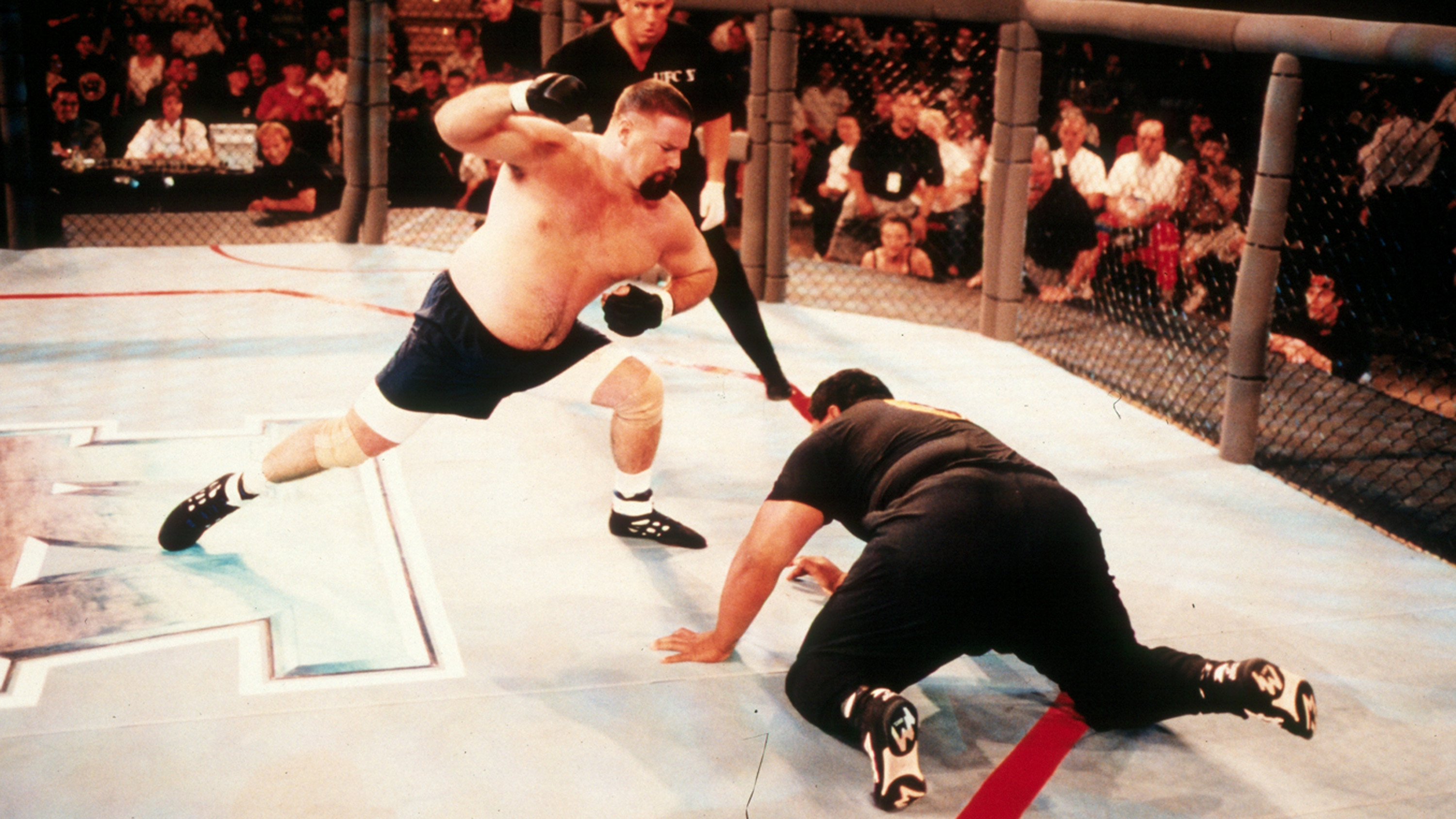 In the early days of the UFC, the knockouts came in a fast and furious fashion, and most were brutal reminders that this was a contact sport. But few were as emphatic as Tank Abbott’s introduction to the world, an 18 second display of fury and right hands that left John Matua down on the canvas, arms and legs outstretched. 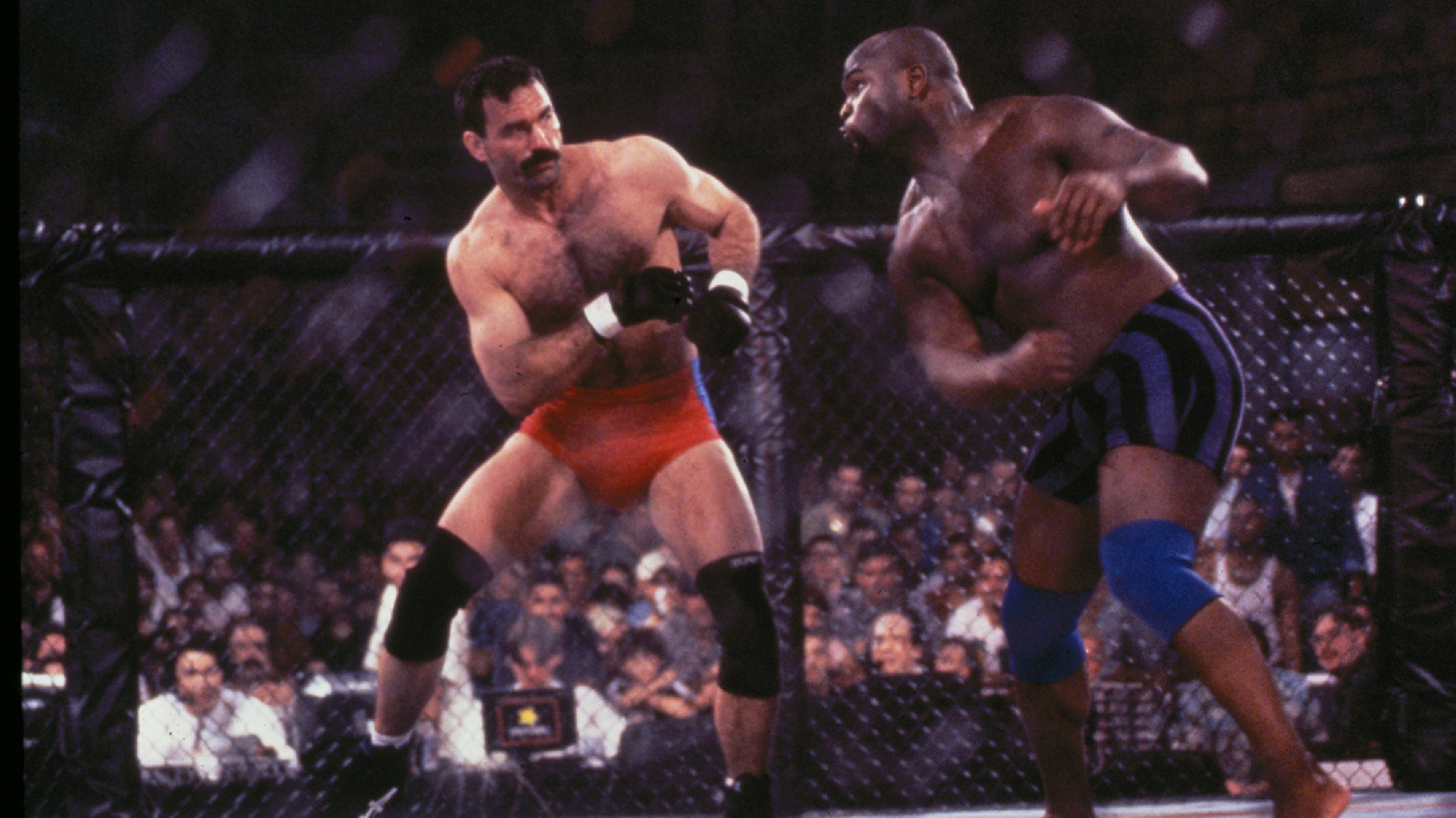 It was perhaps the most brutal knockout in UFC history, and after hearing that Paul Herrera had delivered some trash talk in his direction before their bout, Gary Goodridge responded by catching Herrera in a crucifix position moments into the fight. What followed was a crushing series of elbows that knocked Herrera out in just 13 seconds.

UFC 17 – Pete Williams-Mark Coleman
Exhausted after over 12 minutes of fighting, former UFC heavyweight champion Mark Coleman was just trying to survive against young contender Pete Williams in their 1998 bout. Williams gave Coleman the rest he craved midway through that 13th minute with a flush kick to the head that became one of the most enduring images of early UFC action. 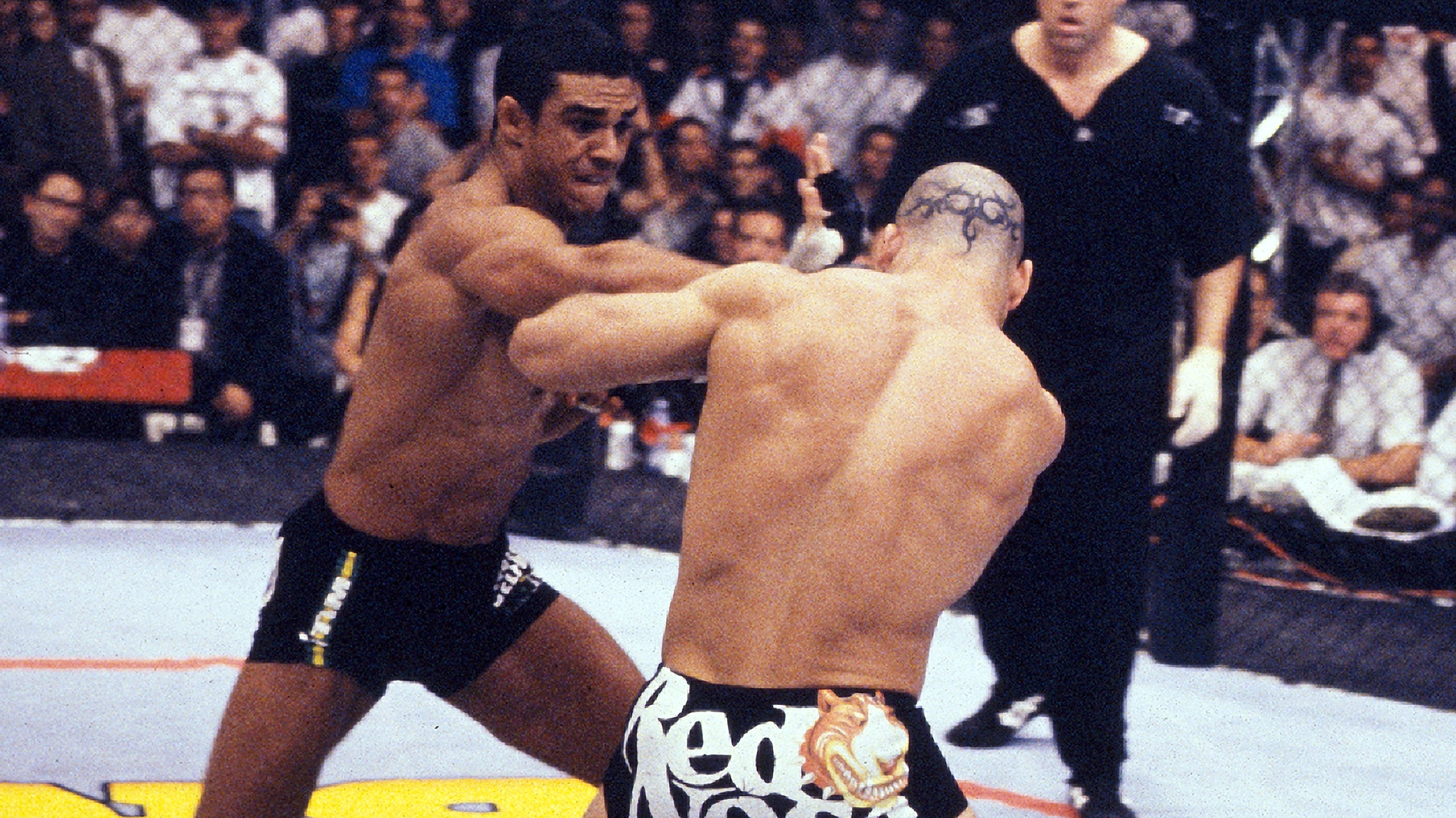 Though their roles in the MMA pecking order would eventually flip-flop, at the time of their Ultimate Brazil bout in 1998, the undisputed star was Vitor Belfort, and Wanderlei Silva was just a raw up and comer. This prospect didn’t get much time to settle in though, as Belfort blitzed “The Axe Murderer” with a blinding series of rights and lefts en route to a 44 second TKO win. 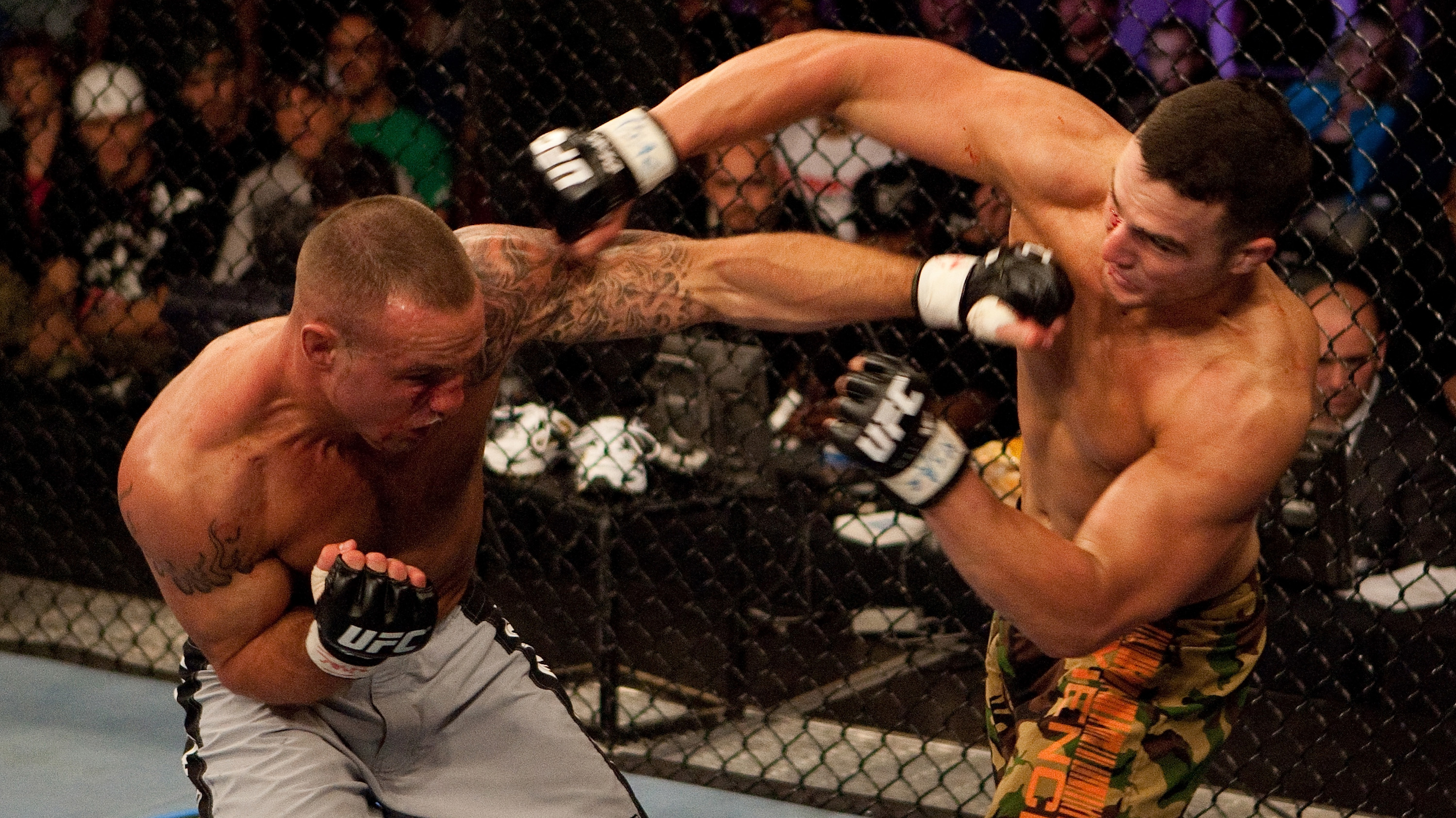 For pure aesthetic value, this unbelievable knockout wins every time. Smith and Sell became friends on the fourth season of The Ultimate Fighter reality show, but they fought like enemies in their bout as they traded power shots. In the second round, Sell looked like he had pulled ahead when he nailed his opponent with a body shot that doubled Smith over in pain as he backpedaled to the fence. Sell ran in recklessly to land the finisher, but Smith caught him with a perfect right hand to the jaw, and just like that, the tables had turned and seconds later, Smith had the TKO victory. It was straight out of a Hollywood script, and one of those endings you truly have to see to believe. 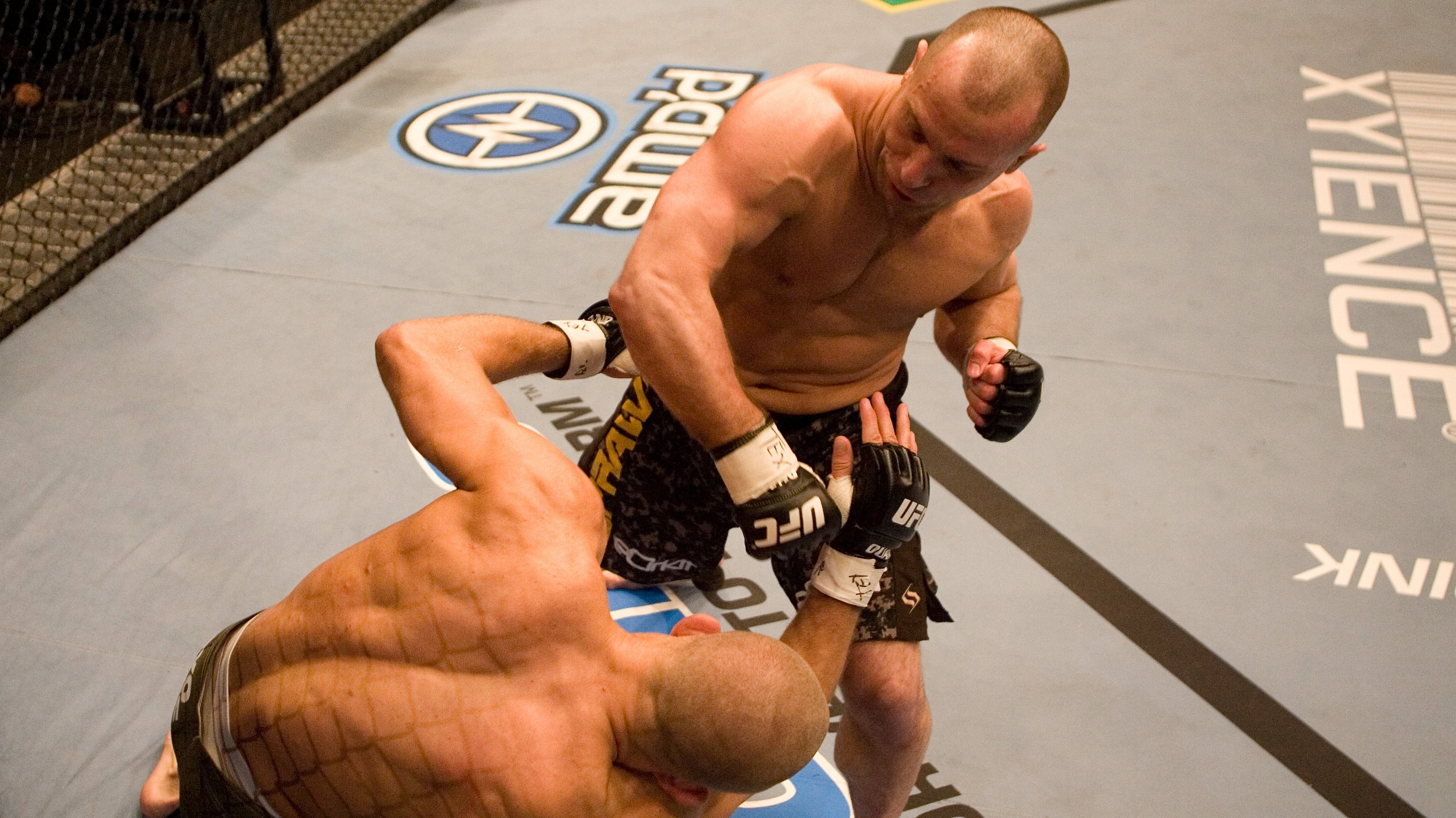 As far as highlight reel knockouts go, there are better choices, but you can’t help but give a nod to a knockout that belongs strictly for its historic and shock value, and Matt Serra’s upset of the seemingly unstoppable Georges St-Pierre definitely applies. A hard right hand that clipped a ducking St-Pierre took the champion’s equilibrium, and as he tried to get his legs under him, Serra was calm, cool, collected, and sending bombs down the pipe that were keeping the Canadian from getting back into the fight. Finally, a series of unanswered shots on the ground forced a halt to the bout, and the MMA world had a new champion in Matt “The Terror” Serra. 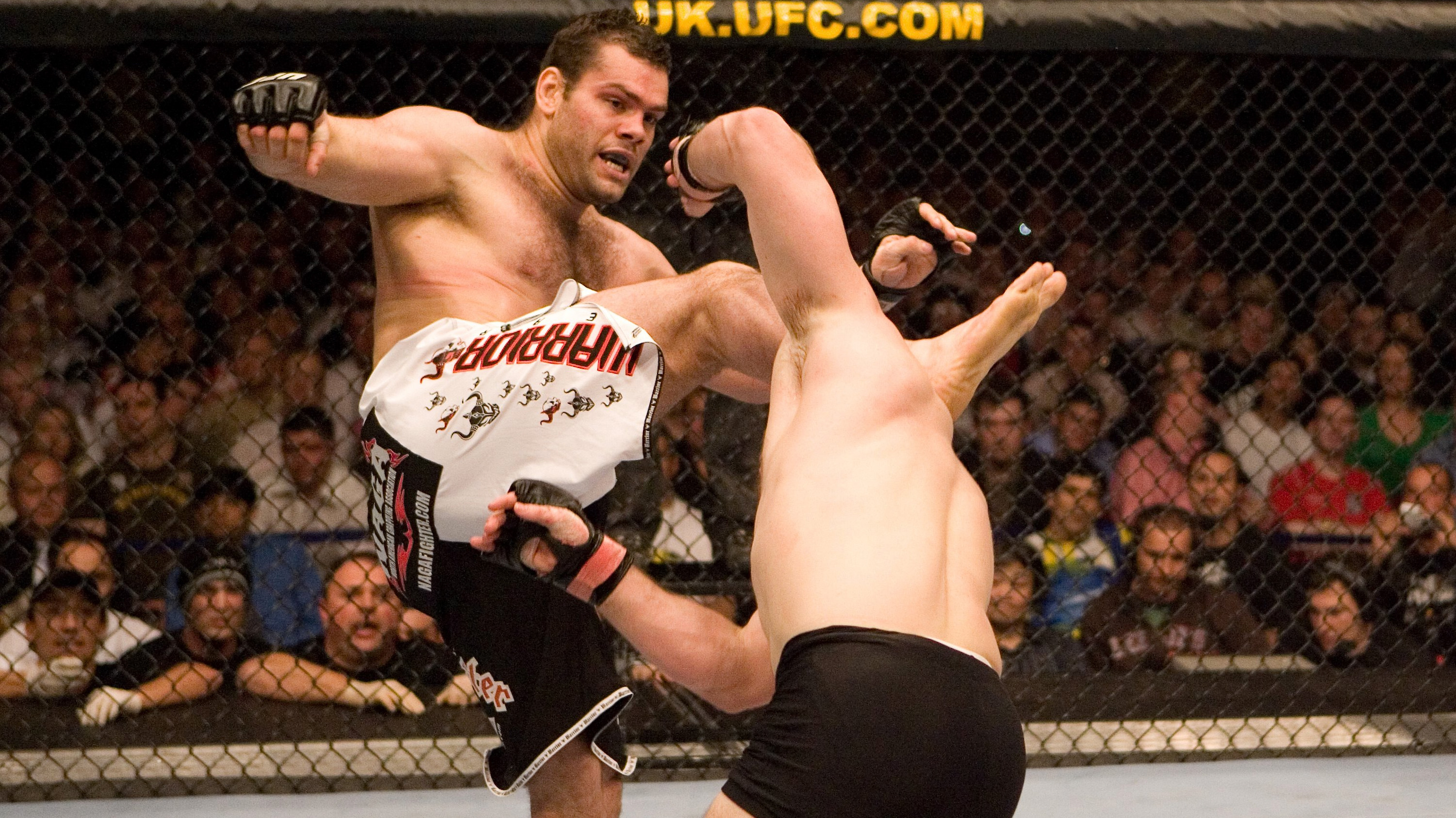 It’s been said that if you live by the sword, you die by the sword, and in a proverbial sense, feared Croatian striker Mirko Cro Cop certainly know what that feels like after Brazilian-Jiu Jitsu black belt Gabriel Gonzaga turned the tables on him and knocked him out in the first round with the weapon he had made his name in the MMA world with – a kick to the head. When it landed, Cro Cop fell like he was shot, grotesquely twisting his knee and ankle in the process. Not only was it shocking, but it was spectacular. 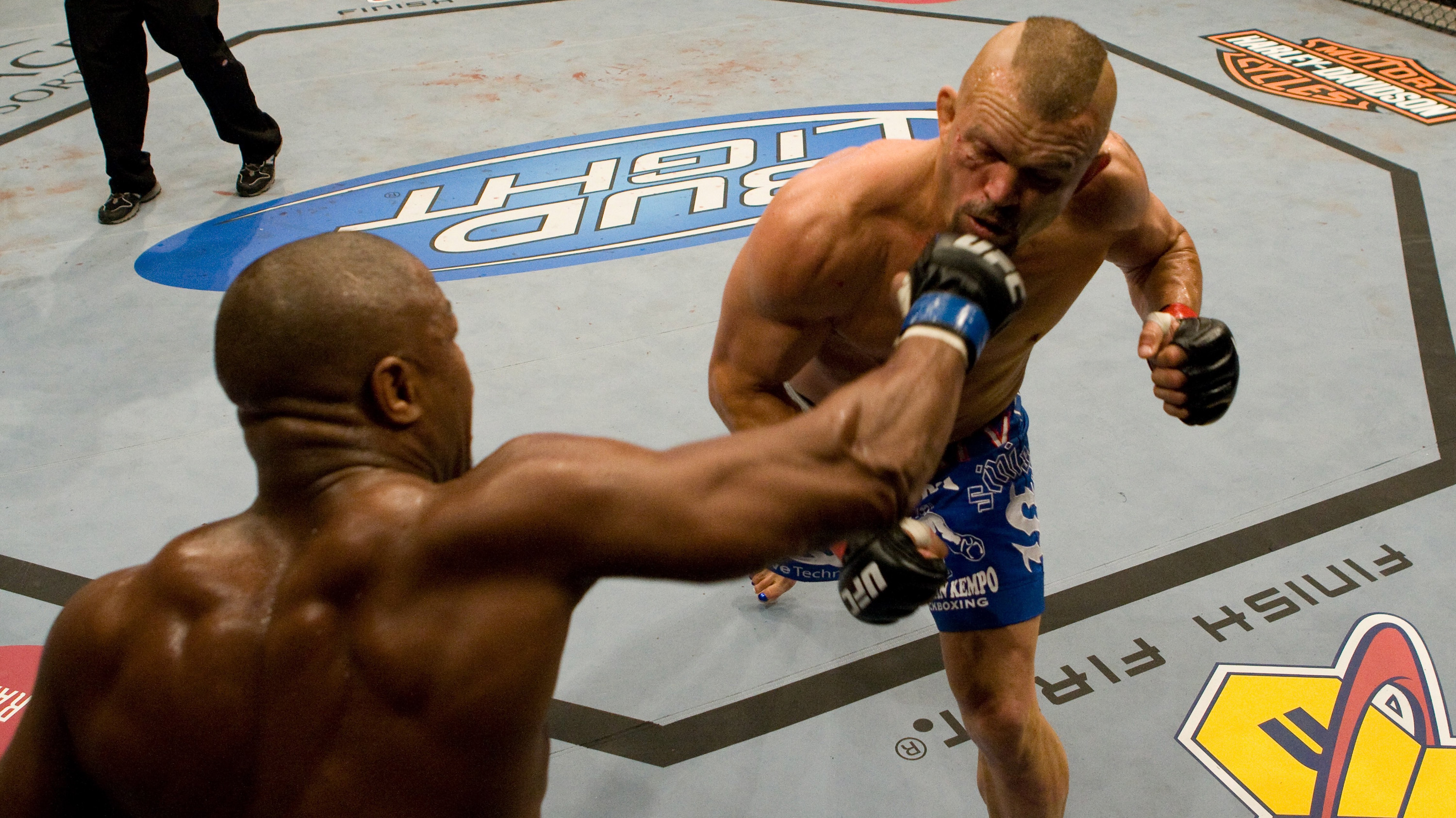 In the first round, Rashad Evans fought the perfect fight against Chuck Liddell, using movement and quick flurries to frustrate ‘The Iceman’. So when Liddell came out recklessly and aggressively in the second stanza, Evans ended the perfect fight with the perfect punch, a right on the button that put the former light heavyweight king down and out. 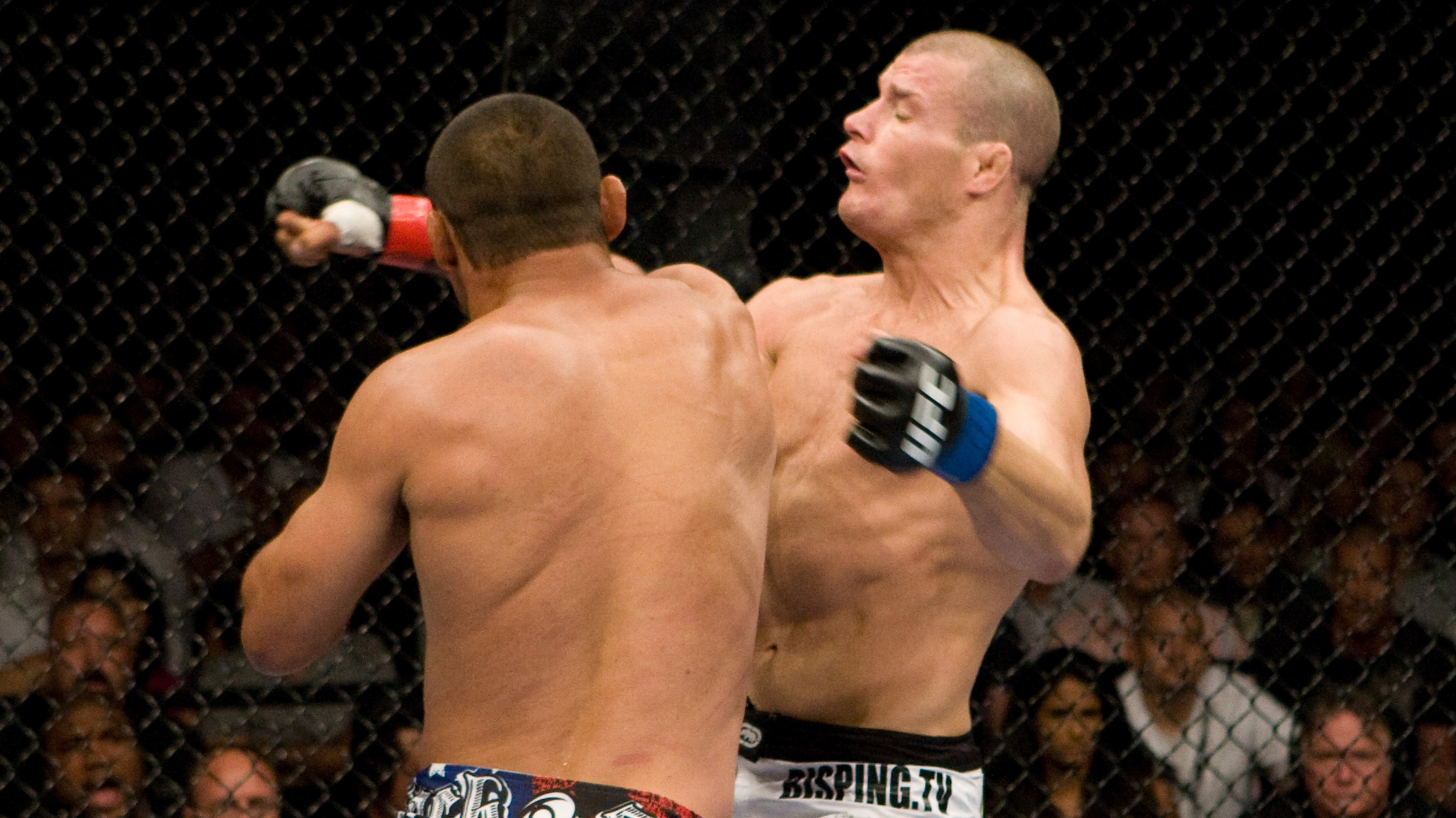 Yes, Michael Bisping talked a lot leading up to his UFC 100 showdown with Dan Henderson. But the Brit’s mouth had nothing to do with his demise at the hands of Hendo. Instead, once the former two-division PRIDE champion realized that Bisping wasn’t hurting him and that he was pulling straight back AND circling into his power hand, the end was inevitable. And when Henderson’s vaunted right hand crashed into Bisping’s jaw in the second, it was lights out, with the final shot delivered to his downed opponent legal, but ultimately unnecessary. 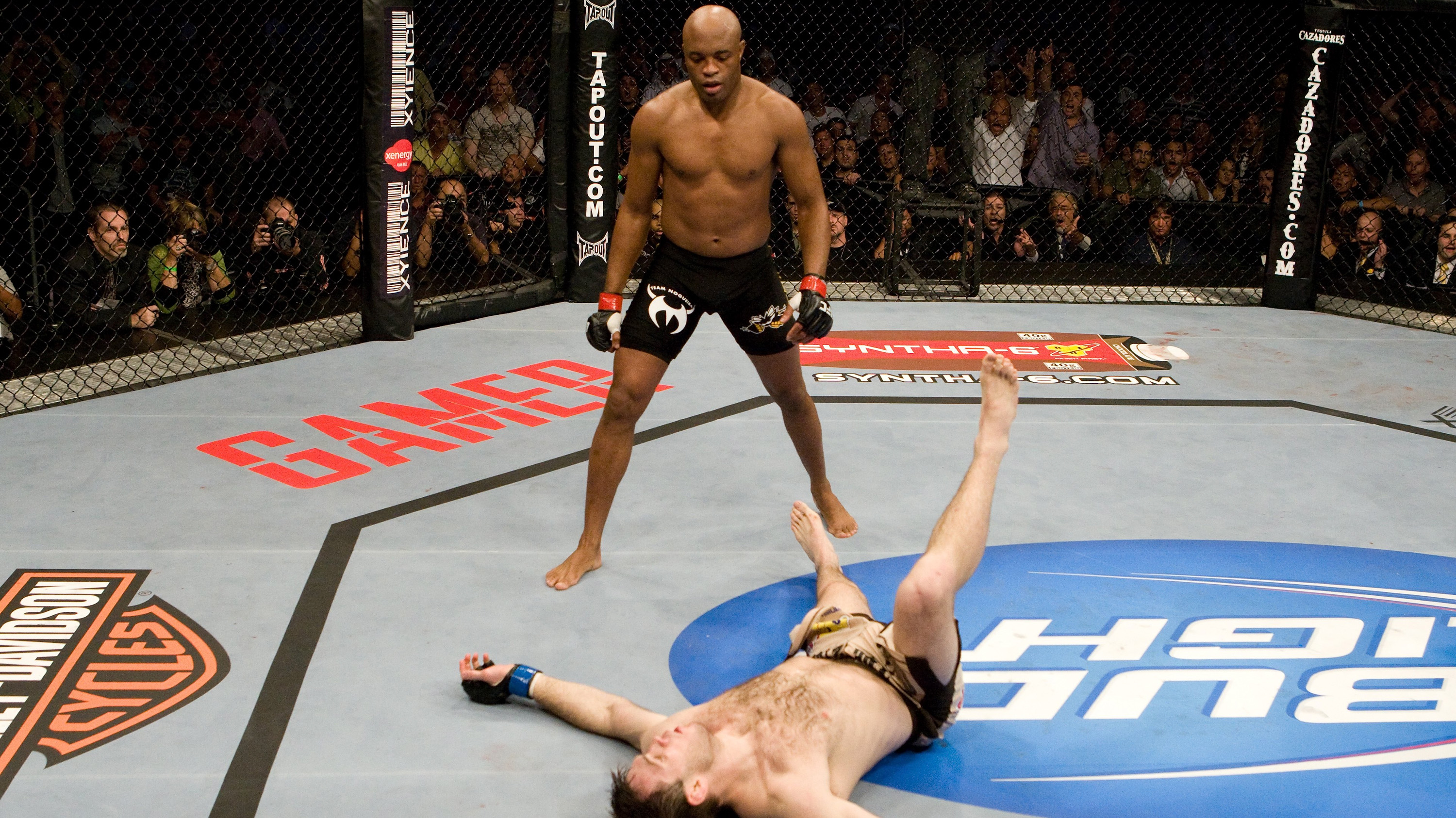 If at one point in your life you can say that you witnessed greatness in person, you’re lucky. Those fans in attendance at the Wachovia Center in Philadelphia for UFC 101 had that opportunity as middleweight champion Anderson Silva went back to the light heavyweight division and put on a clinic of precision striking in taking out former 205-pound titleholder Forrest Griffin at 3:23 of the first round. Call it over the top, but this performance was a potent mix of a Ted Williams swing, a John Coltrane solo, and a Barry Sanders run out of the backfield. 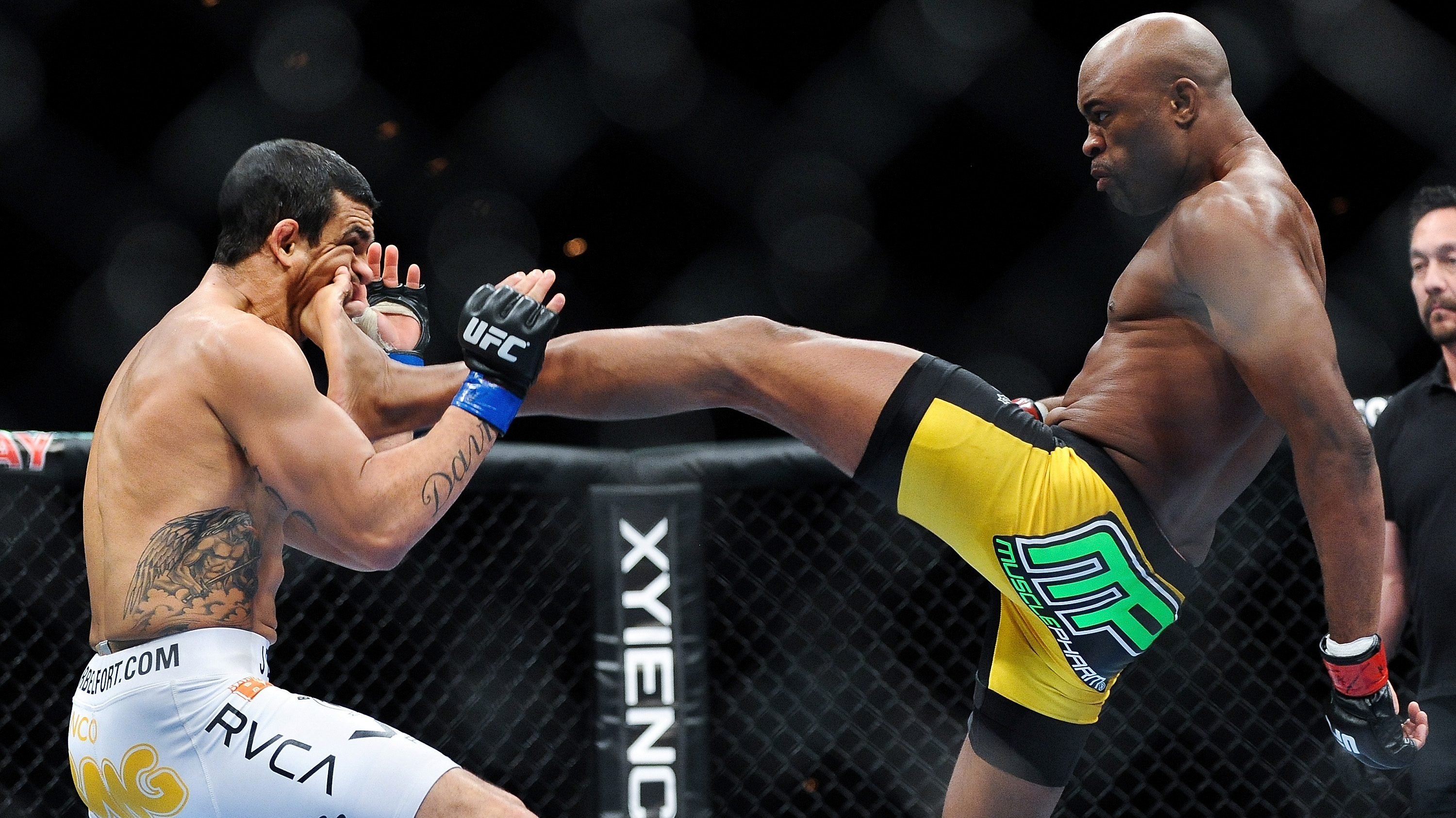 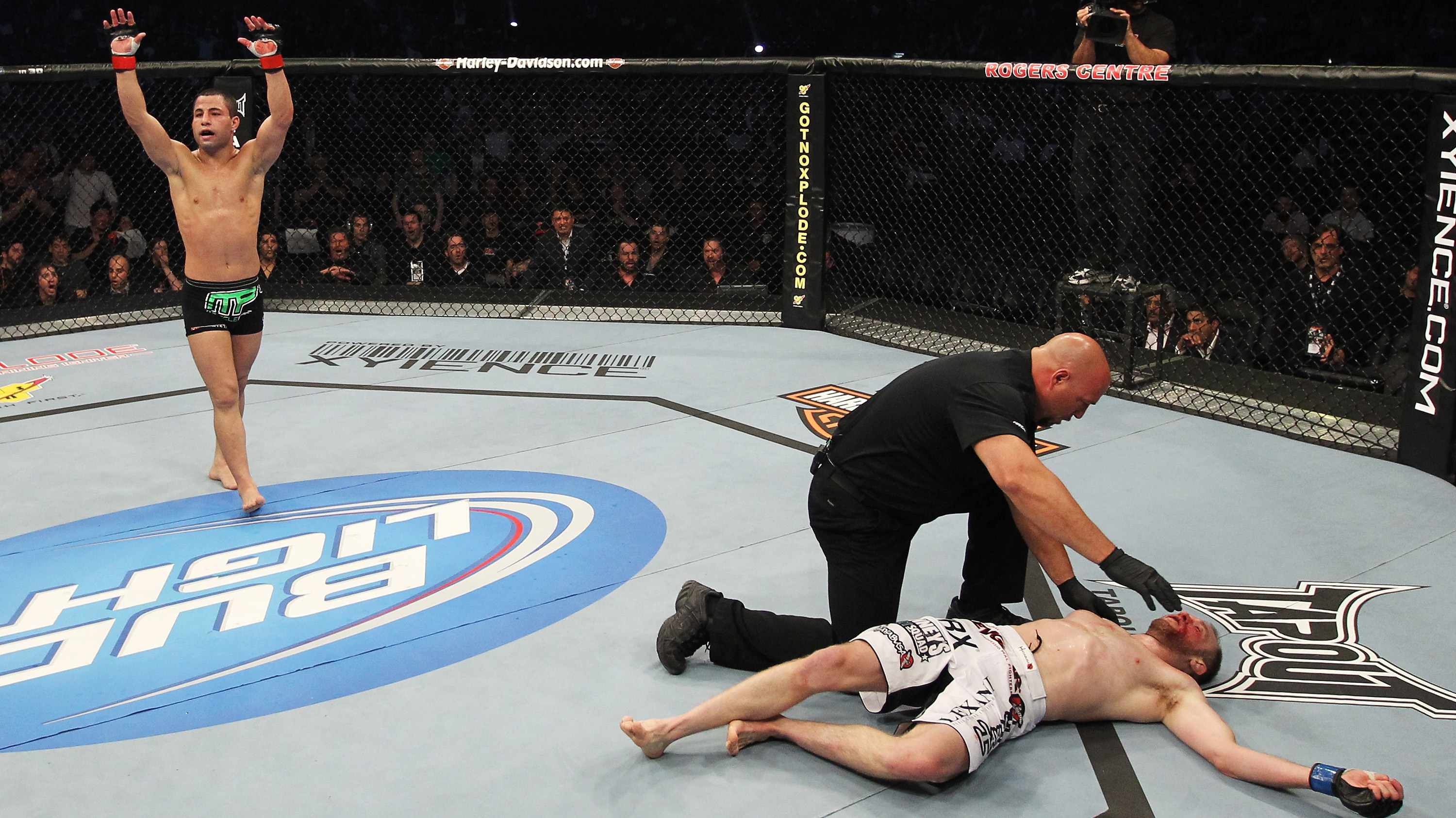 One of the most creative standup fighters in the UFC today, John “The Bull” Makdessi showed off a wide array of techniques in his bout against Kyle Watson, but it was his picture-perfect spinning back fist that will live on in highlight films forever, and not just because it ended the bout in the third round, but due to the way Makdessi set it up with a fake that had Watson completely fooled before the final blow landed. 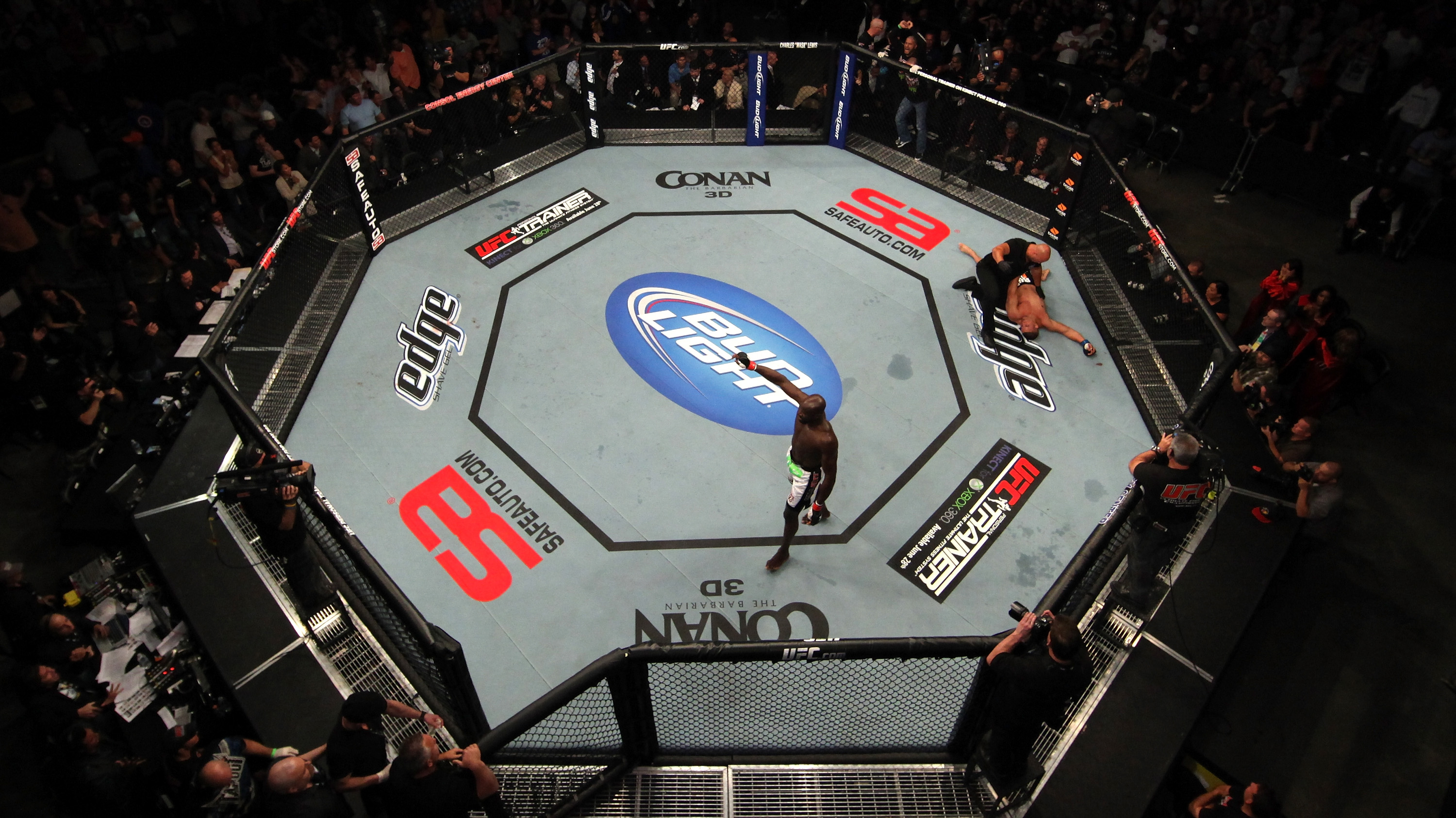 Given some of the disappointments when striker met striker but instead turned it into a wrestling match, expectations were that Cheick Kongo would take Pat Barry down in their June 2011 bout or that “HD” would even attempt to show off his own ground game against the Frenchman. But thankfully, the two decided to live up to their striking reputations, and what followed was a tense trading of thudding leg kicks until all hell broke loose when Barry sent Kongo to the canvas twice, both times appearing to be seconds away from a stoppage victory. But just when all seemed to be lost for Kongo, he got to his feet, planted them, and then ripped off two right hands. The first one stunned Barry, the second put him on his back, and when referee Dan Miragliotta halted the bout, Kongo had just delivered the most spectacular comeback win since Scott Smith finished Pete Sell in 2006. 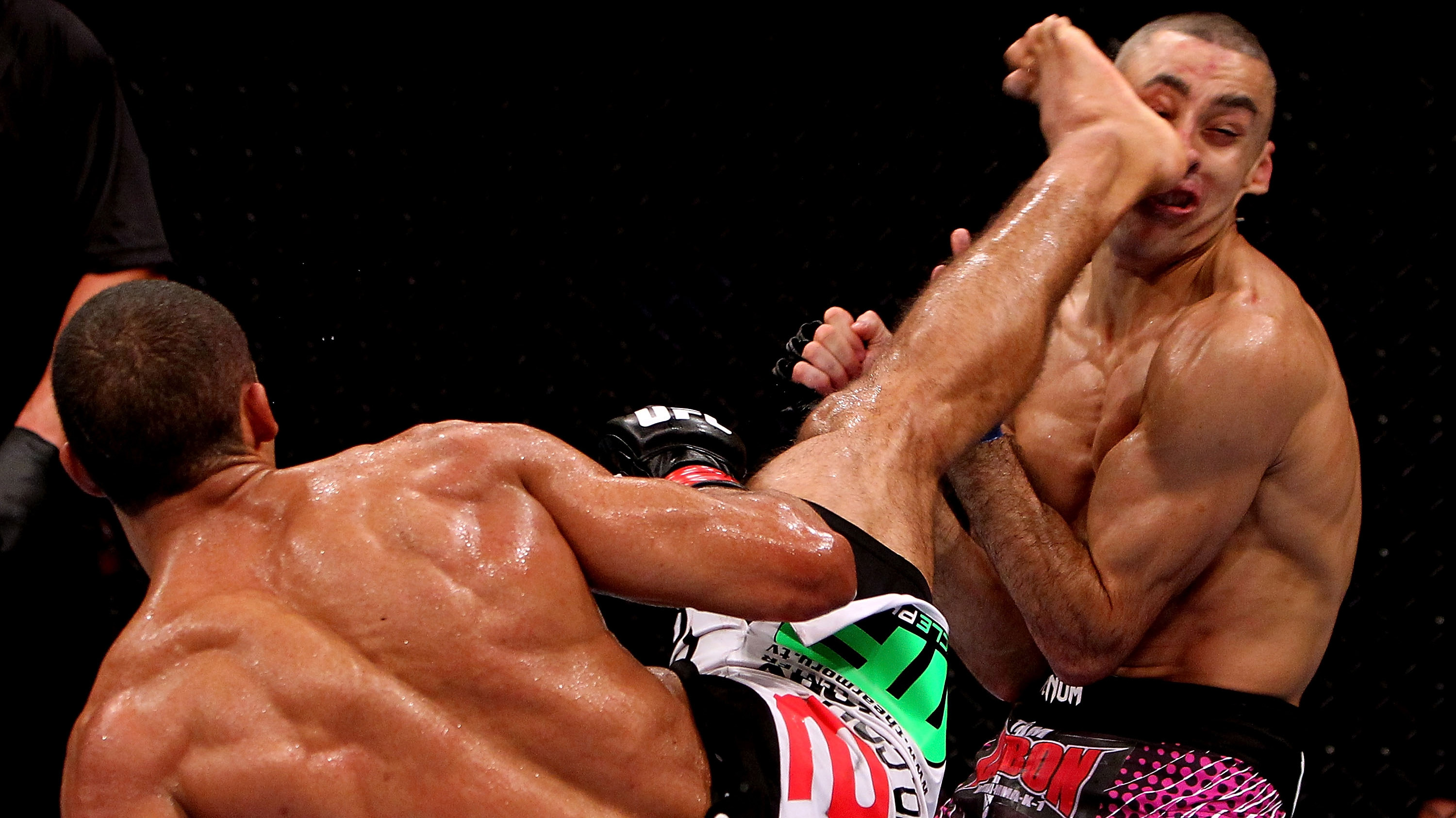 ESPN’s ESPYs may have gotten it wrong in not awarding this its 2012 Play of the Year award, but the finalist there was certainly a winner here, and in a year with some spectacular knockouts, Edson Barboza’s wheel kick finish of Terry Etim at UFC 142 was far and away the best. It had it all – speed, power, technique, accuracy, and pure ‘wow’ effect. 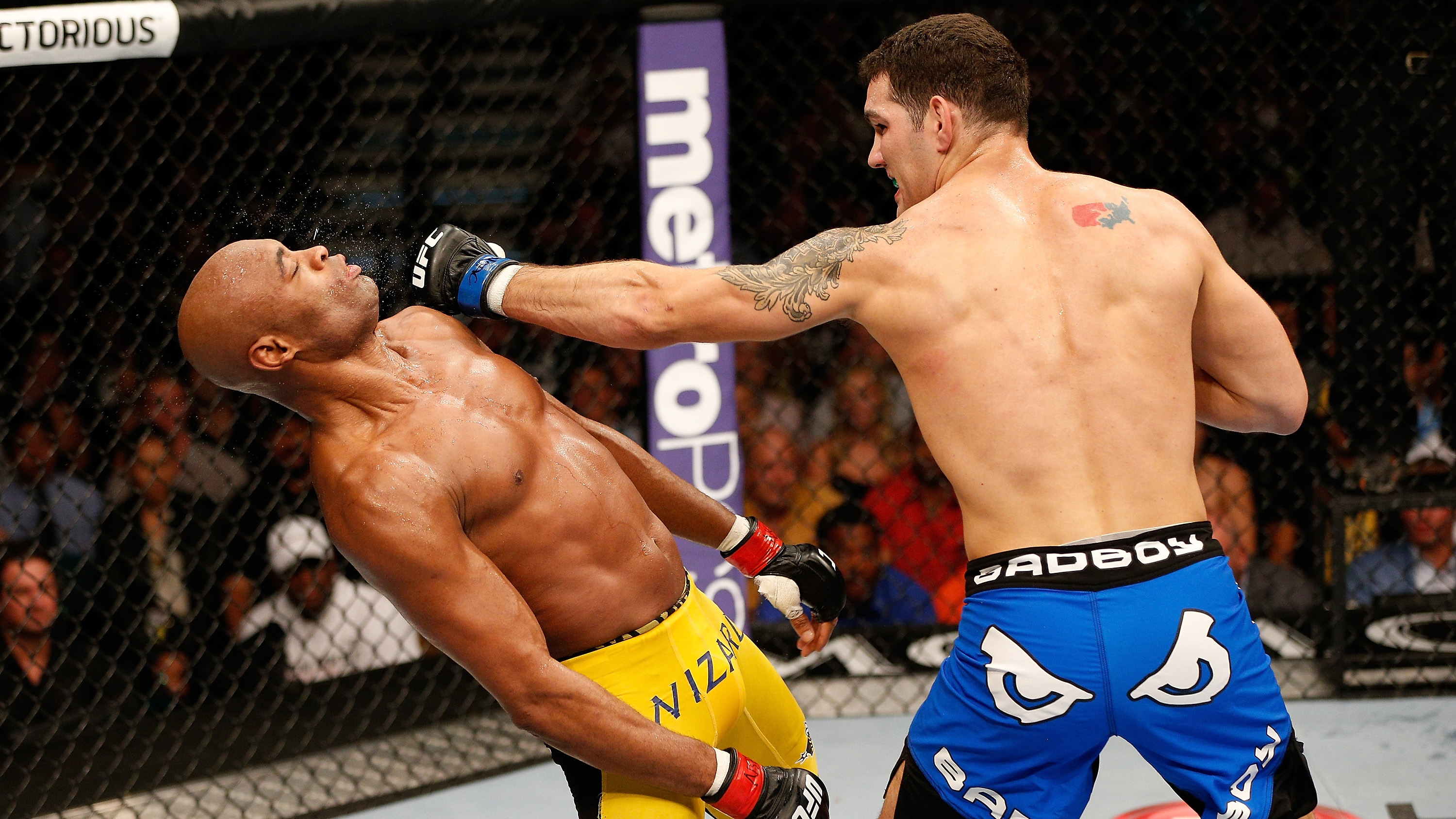 Seeing Anderson Silva lose for the first time in the UFC was shocking enough; to see it happen by knockout doubled the shock, but that’s just what Chris Weidman did against the future Hall of Famer, staying aggressive and not getting reckless as Silva showboated, and when the Brazilian icon dropped his hands once too many times, Weidman made him pay with a left hook that put Silva on the deck and began the finishing sequence of strikes that kicked off a new era in the middleweight division.