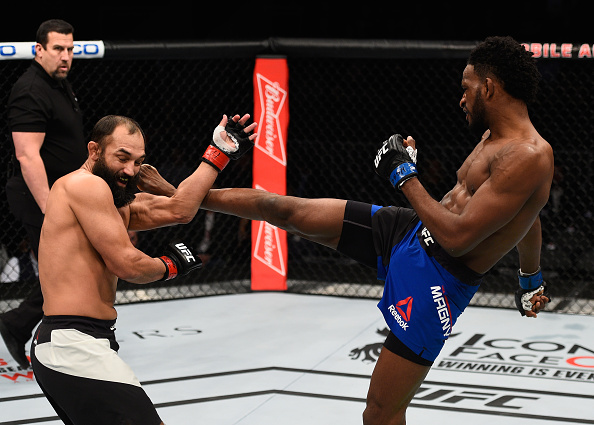 This weekend in Edmonton, Neil Magny’s arduous, extended hiatus from competition will come an end as the welterweight contender takes on former lightweight champ Rafael Dos Anjos on the main card of UFC 215.

Coming off one of the biggest wins of his career – a unanimous decision triumph over former titleholder Johny Hendricks – the welterweight contender has been forced to endure a protracted stay on the sidelines, resigned to watching the division carry in his stead. Weeks kept flying off the calendar and suddenly Magny was counting the number of months it had been since he last set foot in the Octagon and, by the time he returns, the 30-year-old will have been out of action for more than eight months.

“If I’m fortunate enough to do what I’ve done in my past fights and not take much damage, I’m asking (UFC matchmaker) Sean Shelby that night to set up my next fight,” joked Magny, who has been one of the most active competitors on the roster since arriving in the UFC after advancing to the semifinals on Season 16 of The Ultimate Fighter, logging 12 victories and 16 appearances.

While he’s able to laugh about wanting to make up for lost time following his bout with Dos Anjos, there were points earlier this year when the Elevation Fight Team member wondered whether he would ever get the opportunity to compete in the UFC cage again. 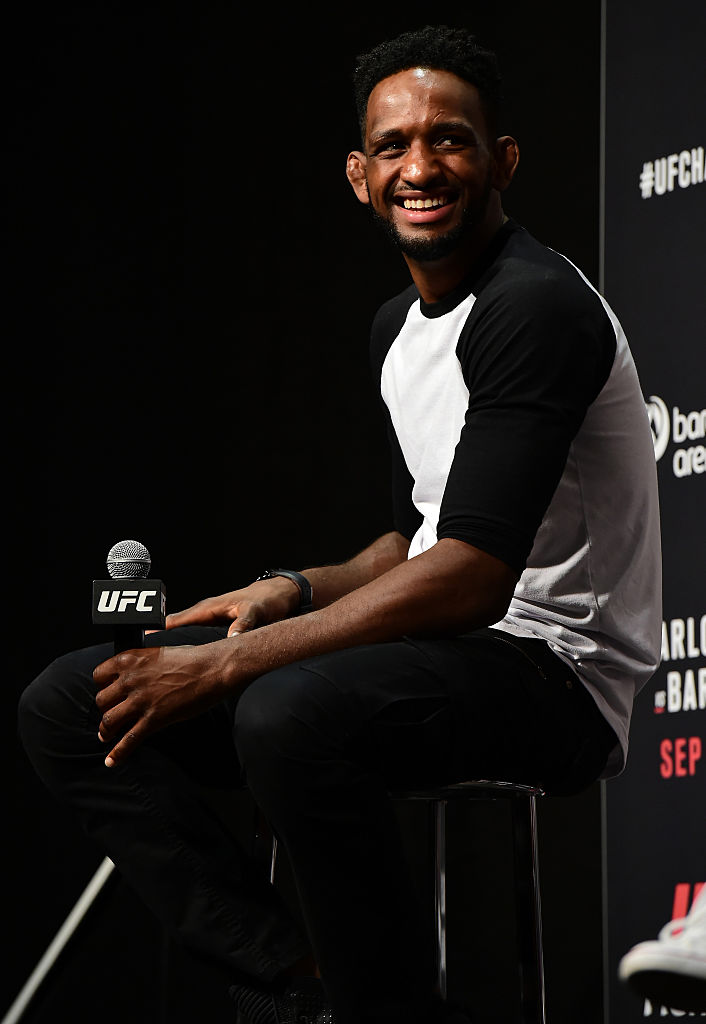 In the aftermath of his fight with Hendricks, Magny experienced a tingling sensation in his left arm, but chalking it up as a stinger, he carried on without pause. A couple weeks later, he was unable to lift a 15-pound dumbbell and knew he was dealing with something far more serious.

“It ended up being a pretty significant neck injury,” said Magny, who was given a choice between having surgery and making a fairly quick return to competition or physical therapy and an uncertain timeline for his next fight. “A fusion would have been an option and the other choice would have been an artificial disc replacement where they’d go in, take the damaged disc out and put a new one in.

“As good as it sounded and as tempting as it was to do the surgery and get back out there right away, it was one of those things that I didn’t want to put myself through because I knew in the back of my mind that if something went wrong with the surgery, there is no going back.”

After 24 weeks of physical therapy, Magny was finally given a clean bill of health and cleared to resume training.

While he definitely struggled with the uncertainty of his situation, the affable welterweight contender also knew he would have plenty of options available to him when he was finally able to book his return to action, as he became a popular name for victorious fighters looking to make their way up the divisional rankings to call out during their post-fight interviews.

“One of things coming off an injury that you’re always worried about is, ‘Is it going to be hard to find an opponent? Am I going to drop off the rankings?’” explained Magny. “All these ‘what ifs’ go through your mind, but being in a position where I was getting called out after all these major wins, I was like, ‘I guess once I get cleared by a doctor, I’m going to have some pretty good fights lined up.’” 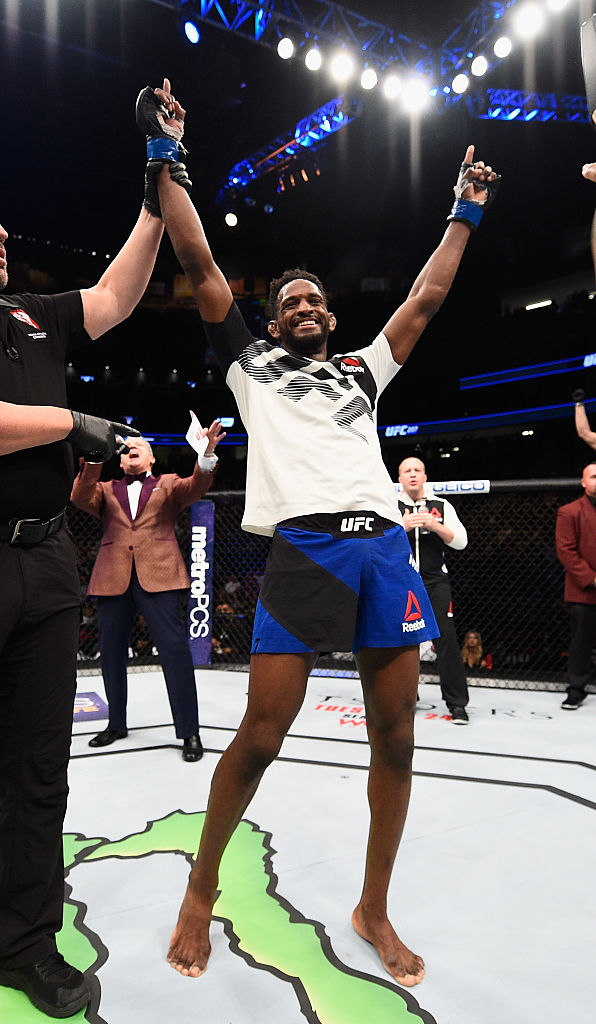 Several fighters were quick to name-drop the Brooklyn-born welterweight in response to being asked who they would like to face next, with American Top Team product Colby Covington investing numerous social media posts towards trying to line up a bout with Magny upon his return.

“Some of these guys got the best wins of their careers thus far and during their post-fight interview, rather than enjoying the moment, I’m the very first thing out of their mouth. I was like, ‘That’s pretty cool! I must have done something right.’”

Once his doctors gave him the thumbs up, Magny expected he would be matched up with one of his vocal suitors and was surprised when the UFC threw him a curveball.

“That opponent definitely caught me off-guard; I didn’t expect Rafael Dos Anjos to be the opponent that Sean Shelby threw out to me because he’s not a very vocal guy and he was coming off his first fight at 170,” he said of getting the chance to face the former lightweight titleholder.

“I thought one of those guys would have actually gotten their wish, but when the call did come through, I was super-excited about it. He’s a guy that I’ve followed his career for a while. He’s beaten some of the guys that I looked up to – Benson Henderson, Donald Cerrone; a lot of tough guys and tough opponents.”

No longer interested in enduring a grueling weight cut, the Brazilian veteran departed the lightweight ranks for the 170-pound weight class and made his successful debut in his new division back in June, edging out former Strikeforce titleholder Tarec Saffiedine.

It was a good showing for Dos Anjos, but one Magny puts very little stock into heading into their clash in “The City of Champions,” as he knows a great deal can change in the span of three months.

It has been a great training camp for both @austinhubb55 and I. We're both peaking just in time… https://t.co/kV8zgb5Kq6
— Neil Magny (@NeilMagny) September 2, 2017

“That was the first time he fought at 170 and it was about three months ago now, so he had time to adjust, deal with carrying the extra weight. I can’t focus on that fight too much – I just expect him to be similar. One thing I’m definitely banking on going into this fight is that I’m going to have a 10-inch reach advantage on him, so I’m looking to definitely use that and make it a key part of the fight.”

With the upper tier of the welterweight division currently unsettled and Magny eager to make up for lost time, don’t be surprised if you see Magny back in the Octagon at least once more before the year is out, especially if he escapes Edmonton unscathed with a victory in hand.

Just don’t expect it to come against one of the myriad contenders who called him out while he was sidelined.

“I think me not fighting them is a lot better than giving them what they want,” said Magny with a devilish laugh. “Can you imagine a kid in a toy store being like, ‘Mom – I want this! I want this! I want this!’ and then eventually the mom gives in. It’s a lot worse if you just sit back and be like, ‘You really want it, don’t you? Well, go out and earn it.’

“I think that would bother them a lot more than actually giving in.”

Nice to have you back, Mr. Magny.