Road to Mayweather-McGregor: The Spirit of 2014

It was the summer that changed everything. And in the third summer since 2014 truly announced the arrival of Conor McGregor and his SBG Ireland teammates to the world stage, “The Notorious” one is on the verge of changing it all once again. This Saturday, he will meet boxing superstar Floyd Mayweather not only in the future Hall of Famer’s backyard of Las Vegas, but in his ring.

It’s nothing new for the 29-year-old from Dublin, who has been issuing mission statements for a long time now.

McGregor’s words after his July 2014 win over Diego Brandao ignited a movement inside the O2 Arena in Dublin, and he’s never backed down from his proclamation that he and his team – and all of Irish MMA for that matter – were going to do special things whenever they put gloves on their fists and a gumshield in their mouth.

But it all started with a dream, then a belief, then a summer that culminated in a meeting at Murray’s Bar on O’Connell Street in Dublin. There, McGregor and three of his teammates, Cathal Pendred, Paddy Holohan and Aisling Daly, watched the unveiling of a 410-foot wide billboard featuring the future UFC lightweight and featherweight champion and the phrase “The Fighting Irish.”

Nothing would ever be the same after that. Today, McGregor has made history as the only fighter to hold two UFC championships simultaneously, and now he’s a crossover star about to cross over into the boxing ring for what is shaping up to be the most lucrative prizefight of all time. Pendred, Holohan and Daly are all retired now, but they’re still part of the SBG family, and will always be revered for the role they played in the Irish Invasion of 2014.

“I was nothing but happy,” Thomas Egan told me in 2016 when discussing the UFC Fight Night card headlined by McGregor-Brandao. “I was so happy and so emotional for all those guys for everything that they had done. I wasn’t thinking of anything other than pure support, pure love and pure happiness for every one of them. I was almost crying when Cathal Pendred got his win, and of course, Conor (McGregor) coming out, I was extremely proud.”

Egan was the first Irishman to fight in the UFC, the teenage friend of McGregor who stepped on to the big stage for the first time at the age of 20. He lost his one and only UFC fight to John Hathaway in 2009, but he had lit a fire in his team and in McGregor.

“I got into the game with Tom,” recalled McGregor in 2013. “We joined Straight Blast Gym, but he was a little bit more focused. I was in and out, and more of a drifter. Then my coach John (Kavanagh) came up to me one night and said ‘Tom has got signed to the UFC and I really want you to come back, dedicate to this, and we can make this happen.’ And I believed him. He instilled the confidence in me and I came back.

“We were only kids,” he continued. “Our pro team was three people deep at the time. Two featherweights, and (UFC vet) Tom (Egan) was a middleweight at the time. It probably happened a little bit too soon for Tom, but it gave us valuable experience and showed us that it was within reach if we dedicate ourselves to it, and that’s what we did.”
MORE FROM ROAD TO MAY-MAC: A Notorious Resume | Hear from Dana White | A Coach's View

Four years later, McGregor was in the UFC. Gunnar Nelson was already there representing SBG. Pendred and Holohan would follow, with Daly, Artem Lobov and Charlie Ward eventually flying the flag for their team in the Octagon.

They were led by John Kavanagh, a visionary coach who didn’t put restrictions on his fighters’ personalities or what could be done on fight night. There were basics to be taught, strategies to be implemented, tests to be passed. What happened after that was up to the fighter.

Having gone 3-3 himself as a pro, Kavanagh knew better than most coaches what it took to compete under the bright lights – or at that time, the not so bright lights as his fighters paid their dues on the local circuit.

“Most of the things were being done in clubs,” Holohan said of those early days. “You probably would have had a St. John’s ambulance man as the doctor, and you were probably being paid around 80 quid.”

“2009, 2010, and even into 2011, myself and Conor were getting no recognition,” said Pendred in 2014. “We were beating all these top guys around Europe, and no one really gave us any attention or knew who we were. We could barely get an inch in a tabloid paper, let alone a broadsheet paper or a magazine. And we weren’t making any money because any money we were making as fighters was basically going back into our training. We trained three, four months for a fight, earning a couple hundred quid, and it would barely cover your cost of travel going to and from the gym.” 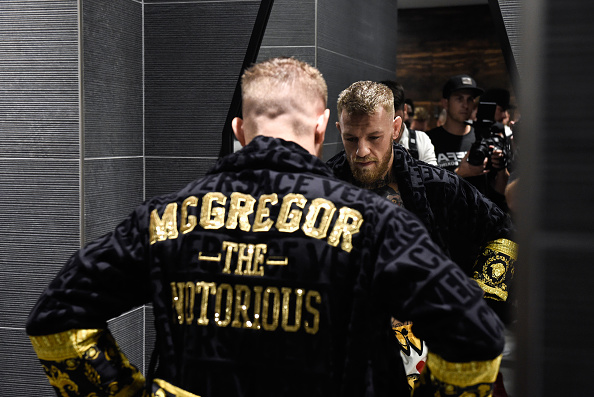 Even the coach was prepared for battle if necessary.

“You still go to the shows with your gum shield in your bag in case someone drops out and you have to jump in,” laughed Kavanagh in a 2014 interview conducted shortly after the Dublin show that changed it all for everyone involved.

And on that night, far removed from those early days, four SBG fighters stepped up to the plate on the sport’s biggest stage and each of them – McGregor, Nelson, Pendred and Holohan – knocked it out of the park.

“Unfortunately I come from an engineering background, not an English Lit background where I can use nice vocabulary to try and explain the unexplainable,” Kavanagh laughed. “But it’s a dream come true. It would be hard to top this with one of my guys winning a belt in Vegas. Although that’s the ultimate goal and that will be a very, very special night, I don’t think this night will ever be eclipsed. Four fighters, four wins, main event, co-main event, my mother and father in the crowd. My dad is 64 and he said it was the greatest night of his life. It was special.”

There would be more special nights, and another one is taking place this Saturday as McGregor attempts to shock Mayweather – and the world – by winning his first professional boxing match against the best boxer of this era. He’s come a long way since the Summer of 2014, but then again, 2014 was a long way from when the members of the SBG squad first started chasing their dreams, a point Pendred made to McGregor as they watched cameras and media members swarm their gym that year.

“Remember when no one gave a s**t about us,” Pendred asked McGregor. “No one cared what we were doing.”