If Owen Roddy has learned one thing from being around Conor McGregor all these years, it’s to expect the unexpected. So while he never thought he would be working the corner for the UFC lightweight champion in one of the biggest boxing matches in recent years this Saturday, it wasn’t really a surprise once McGregor’s clash with Floyd Mayweather became a reality.

“Once I knew there were negotiations, then I believed it was gonna happen,” he said. “But I never imagined working Conor's corner in a boxing match, never mind one of the biggest boxing matches ever. But that's what always seems to happen when you're working with Conor. He always seems to do these extraordinary things.”

If the 29-year-old Irishman pulls off a win over the 49-0 Mayweather this weekend, we’ll have to find a new word that is bigger than “extraordinary.” And should he score the upset, a big part of the credit for that victory will go to the former fighter turned striking coach, though that’s never something you would hear out of the affable and low-key Roddy’s mouth. As far as he’s concerned, he’s here to get his fighter ready, and then it’s up to McGregor to do the work on fight night. 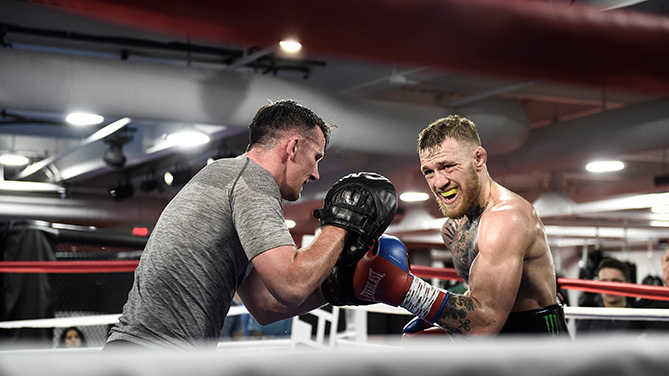 It’s a strategy that’s worked perfectly for McGregor since his UFC debut in 2013, as he’s compiled a 9-1 record with seven knockouts. So from Roddy’s perspective, the key heading into McGregor’s first pro boxing match is to keep it as business as usual as possible.

“When we found out it was official, the whole team came together and we did what we do with everybody, which is watch the opponent,” he said. “We sit down and watch a lot of tape on him and try to see where we can capitalize on stuff and then we come up with a game plan that we think is gonna expose some of the holes in the opponent's game. That doesn't really change. People keep asking what's the difference, but for me there's no real difference. It would be the same thing if we were fighting MMA. We would still be trying to read the opponent and come up with a gameplan that would fit.”

Yet while the system of preparation remains the same, this is boxing, not MMA, so there have to be some adjustments to be made, right? Not necessarily, said Roddy.
MORE FROM ROAD TO MAY-MAC: A Notorious Resume | Hear from Dana White | A Coach's View

“The only real difference for me is the fact that we're just focusing on hands,” he said. “I've always said it's the same thing when you're in a fight. It's about two guys trying to outsmart each other and trying to put them in positions where they're vulnerable and they leave openings for you to capitalize on. In MMA, there's more to deal with in regards to dealing with kicks, knees and elbows and defending takedowns. In boxing, it's only the hands, but obviously the guys are very good with their hands so you have to be a little bit smarter. But it doesn't really change that much. You try and read your opponent, you see the way they move, what kind of predictable movements they have and then you try to put together a game plan to capitalize on that.”

So what does he see when he looks at the 40-year-old Mayweather, who is returning from a two-year retirement to face McGregor this weekend?

“He's a very good boxer, of course, one of the best defensive boxers to ever do it,” Roddy said. “But for me and for us, everybody has holes in their game, everybody has predictable reactions to certain things and they move the same way after certain shots, so it's trying to watch out for stuff like that and put stuff in that would apply. And that's what we have done.”

On Sunday morning, the entire world may have changed for McGregor, his coaches and his teammates should he defeat Mayweather. Owen Roddy may even have a line of fighters outside the gym waiting for him to show them the moves that shocked the world. But don’t expect this striking coach to change.

“At the end of the day, I've worked with the team that I've worked with all my life, and that's who I'll be working with,” he said. “I don't think I'll be working with any boxers anytime soon. (Laughs) When I go back to Dublin, I'll go back to my daily routine and get my own guys ready for fights and get all the pros at SBG ready for fights. And that's exactly what I will do.”
Save