Not many people in the fight game know what Conor McGregor is going through now quite like Joe Duffy does.

As the UFC lightweight champion trades his four-ounce vale tudo gloves for ten-ounce boxing gloves in order to battle Floyd Mayweather in the ring on Aug. 26, Duffy, a countryman and former opponent of McGregor, watches closely, having already been where “The Notorious” one is heading.

And it won’t be easy.

“I think it would be difficult for anyone,” Duffy said. “We watched the (Manny) Pacquiao fight (versus Mayweather), and you seen how difficult it was for someone who had been boxing their whole life. And to top it off, he (McGregor) is boxing one of the best boxers ever.”

Duffy has experienced life as a pro boxer as well as a pro mixed martial artist. Yet while his journey into the prize ring wasn’t on the mega-scale of Mayweather-McGregor, he did make the leap. And after compiling an 11-1 record that included victories over McGregor and Norman Parke, the current UFC lightweight standout put his MMA career on hold to enter the world of professional boxing.

“The biggest adjustments were the amount of rounds and how relaxed you need to be, how much more efficient and, also, when you’re doing MMA, you’ve got a lot more targets,” Duffy explains. “In boxing, you can only target from the belly button up, really. And when your opponent’s got his guard up and he’s well covered, you’ve got to learn how to sneak the shots in there.”

He learned his new craft, though, with his professors being some of boxing’s best, including James DeGale, Andy Lee, George Groves and Chris Eubank Jr. Those are Olympic medalists, world champions and top contenders, and the Donegal native learned his lessons well.
RELATED: Watch Dana White's Video Blog as part of MayMac World Tour - Ep. 1 | Ep. 2 | Ep. 3 | Ep. 4 | Ep. 5 | Ep. 6

“It was difficult and it was a baptism of fire, but I improved very fast,” said Duffy, who fought all seven of his pro boxing bouts in 2013, winning them all. Yet by 2014, he was back in MMA, and less than a year after returning, he was a member of the UFC roster.

“My heart was still in MMA,” he said. “I’ve been doing martial arts since I was a kid, and something was missing when I couldn’t grapple, wrestle and all these other things.”

While he competed as a boxer, Duffy didn’t juggle two sports. This all-in approach is a must for McGregor, who isn’t thinking about defending his UFC title while he prepares for Mayweather.

“I think if you’re going to excel in something, then you need to go at it full throttle,” Duffy said. “I think if I was trying to do both, then I probably wouldn’t have learned as much as I learned. I wouldn’t have improved at the rate I improved and I would have had my foot halfway out the door, and this is not a sport where you can do that.

“This is the fight game, and if you have your foot halfway out one of the doors, then you’re putting yourself in a position where you could not only get a loss, but you could get hurt.” 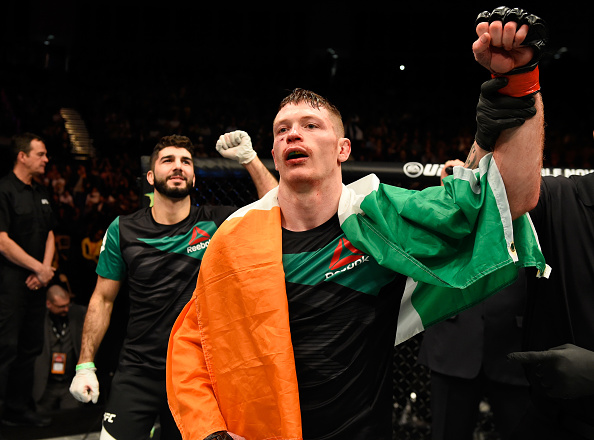 Duffy knows what he’s talking about, so having seen both sides of the combat sports fence when it comes to boxing and MMA, does he think McGregor can shock the world and beat the best boxer of this era at his own game?

“His one opportunity is maybe if he can show Mayweather a style that he’s never seen before,” he said. “McGregor has the in-and-out, karate style and that may be awkward for Mayweather to adapt to. Mayweather struggles with unorthodox fighters like (Marcos) Maidana, and sometimes those are the hardest fights. When you can’t predict what someone’s gonna do, then it makes it very difficult.

“Time isn’t really on McGregor’s side, though,” Duffy concluded. “The style may be awkward for Mayweather, but I feel like being able to keep it up for 12 rounds is gonna be the difficult part.”
Save