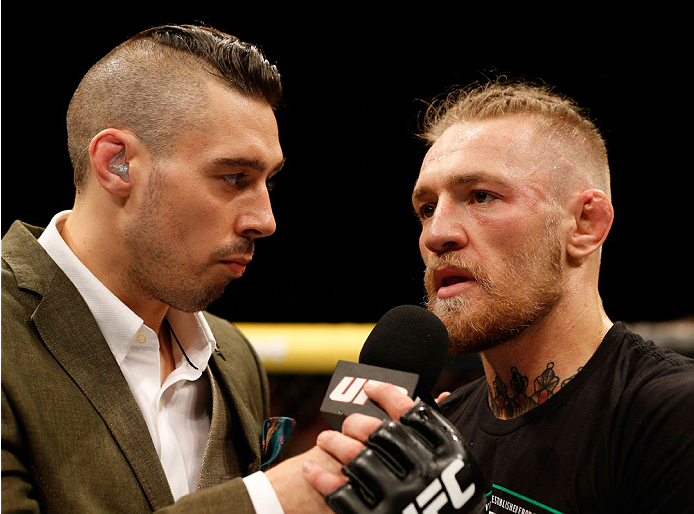 Dan Hardy interviews Conor McGregor after McGregor's win over Diego Brandao in 2014" align="center" />
UFC veteran and current analyst Dan Hardy is like a lot of fans when it comes to the Aug. 26 meeting between Floyd Mayweather and Conor McGregor. The only difference is that when the bell rings at T-Mobile Arena in Las Vegas, “The Outlaw” won’t just be watching. He’ll be calling the action as part of the Sky Sports Box Office team, and he can’t wait.

“I’m keeping a cool exterior, but every time I think about it, I want to shadow box, and that’s always a good sign,” he laughs. “For my first boxing match to be a Floyd Mayweather fight, it’s ridiculous.”

Mayweather, 49-0 and a future Hall of Famer, is the first name on the marquee for this clash of worlds between a boxing superstar and a mixed martial arts champion. But most of the talk leading up to the bout is focused on McGregor and whether the UFC lightweight champion can make the move from the Octagon to the ring and be successful in his first pro boxing match.
Related: Read - Joe Duffy talks Mayweather-McGregor | Watch - Dana White Talks May-Mac on Jimmy Kimmel

Hardy believes he can.

“The people that are absolutely counting him out are ridiculous,” said Hardy, who has been burning the midnight oil in preparation for the fight, and while he knows McGregor’s game inside and out thanks to his work doing commentary and analysis for the UFC, now it’s time for him to break down the style and career of “Money” Mayweather.

“I know Conor very well, which means that all I need to do with Conor is consume the new stuff that’s coming out – any of his interviews, videos of sparring, any of that stuff that is current,” he said. “With Floyd, I’m going back through his career, working my way through the southpaws he’s fought, and then I go to the more interesting fights, like the (Marcos) Maidana fights where he was troubled and the Shane Mosley fight where he was hurt, and I do exactly what I normally do.

“I pick out consistencies in his game, things I see him do regularly, things that he struggles with and gets caught with, and tics and tells in his movement. Those are the things I’m looking at and I kind of overlay them with the things I know about Conor and see how they match up. And then of course there are all the X-factors involved in this one.”

It’s those X-factors that Hardy believes McGregor can use to shock some folks – including Mayweather – on fight night. In short, while McGregor is entering a bit of the unknown when it comes to boxing, “The Notorious” one is completely unknown to Mayweather, who has nothing to go on when it comes to the boxing stylings of the Dubliner.

“The unpredictability that Conor brings to the table is really interesting to me,” Hardy said. “Yes, Floyd’s beaten the best boxers of our time, but Conor’s not a boxer. That’s why I find this so fascinating. If you put a beginner in there with Floyd in a sparring session and he’s an enthusiastic beginner with a lot of confidence, he’s probably got more of a chance to hit Floyd with something unpredictable than a seasoned pro like Canelo (Alvarez) because it’s going to come from an unusual angle. That’s what we saw in the Maidana fight.”

In that first fight with Maidana in 2014, the Argentinean brawler, who did his best to make the bout a brawl, befuddled Mayweather at times. When it was over, Mayweather got a 12-round majority decision, but it made many think that when McGregor steps into the ring a week from Saturday, his strategy should be similar – to do his best to get in close and make it a fight and not a boxing match. Hardy doesn’t think that’s the only way for the Irishman to win, though it’s part of it.

“I certainly think he (McGregor) has got to control the center of the ring,” he said. “Anything else would immediately put him on the losing end of the fight because then he’s playing into the hands of Floyd Mayweather because he (Mayweather) will be dictating the pace of the fight, which he (McGregor) doesn’t want to allow him to do.

“He’s got to push a pace and I would say to work on him like a heavy bag,” Hardy continues. “If he works like that and hits whatever target is there, and anytime he can close the distance and be the more physical man in there, I think that will pay dividends as well.”

Then it’s a fight. Just the way McGregor wants it.

Stay tuned to UFC.com for more insight from Dan Hardy on the road to Mayweather-McGregor