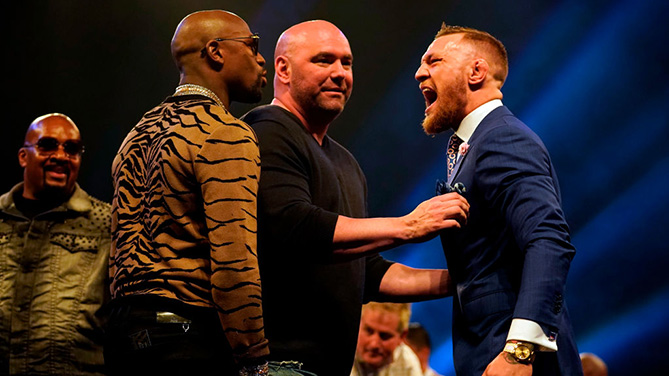 The official nickname of UFC lightweight champion Conor McGregor is “The Notorious,” but as the years go by and UFC President Dana White watches the Dubliner continue to raise the bar when it comes to the risks he’ll take in the pursuit of everything from greatness to mega—paydays, he’s got another moniker in mind.

“He’s a very unique individual,” White said. “That’s why I call him the unicorn. He’s unlike any other fighter I’ve ever dealt with in my entire career. His belief in himself is unbelievable.”

It’s why what might have seemed an impossible dream – McGregor moving into the world of boxing to face Floyd Mayweather – is now a reality, with the pair meeting at T-Mobile Arena in Las Vegas on Aug. 26. And as far as White is concerned, he’s not about to start picking against his fighter anytime soon.

“In my history with him, this guy has done everything he said he would do, including picking the round that he would do it in.”

That history began in 2013, when White brought in the confident, yet unproven, Irishman to face the UFC’s best. Owner of a 12-2 record at the time, McGregor had built a positive reputation in Europe, but that wasn’t what initially sold the UFC boss.

“When we first found Conor, you don’t know if a guy can fight, but we knew he had the personality,” he said. “He was hilarious and fun to be around, and once he got in front of the public, we felt he could be a big star.

“But could he fight?”

He could. Owner of a 9-1 UFC record that includes world titles at 145 and 155 pounds, as well as seven knockouts, the 29-year-old McGregor proved that he was one of the best fighters on the planet. But beyond that, McGregor transcended the sport and became an international superstar in a little over four years, so when he started talking about crossing from the Octagon to the ring to face the 49-0 Mayweather, White listened. And when the deal was made, the world started watching, reading and listening to everything associated with the bout.

“This is a global fight,” White said on the Brooklyn stop of the four-stop, three country media tour to officially announce the fight. “It’s a fight that the whole world is watching and is interested in. If you would have told me a year ago that I would be at a world tour press conference for McGregor vs. Mayweather, I would have never expected that. But here we are.”

Now it’s less than three weeks away, begging the question, does White believe McGregor can pull off the upset of the century?

“I don’t see him (McGregor) outpointing Floyd in a boxing match,” he said. “I believe that in this fight, Floyd is going to fight the way he traditionally fights. He’s the best defensive fighter ever, I think he’s gonna stay on his toes and move around a lot and use the ring to try and stay away from McGregor. And I think McGregor goes straight after him and tries to rough him up and tries to knock him out.”

And while trying and succeeding are two different things, White thinks that it’s very possible that the stars will align at T-Mobile Arena and that McGregor’s youth, size and confidence can overcome Mayweather’s experience and status as the greatest boxer of this era.

“Floyd Mayweather has incredible defense and he’s fast,” he said. “But here’s reality: Floyd Mayweather is 40 years old, Conor McGregor is a southpaw, and if there’s any kink in that armor, it’s when Floyd goes against southpaws. McGregor is 29 years old and he hits like a truck. When McGregor hits people, he hurts them, and when he hurts them, he finishes them. In a 12-round fight, is Conor ever gonna hit him once? I believe he’ll hit him more than once and we’ll see what happens when Floyd gets hit.”

If McGregor wins, the world may just stand still for a moment. But Dana White won’t be surprised.

“I stopped doubting Conor McGregor a long time ago.”