Road Games are No Problem for Carmont

"When fighting is your living, you arrive in a country with a completely different mindset than for vacationing." - Francis Carmont 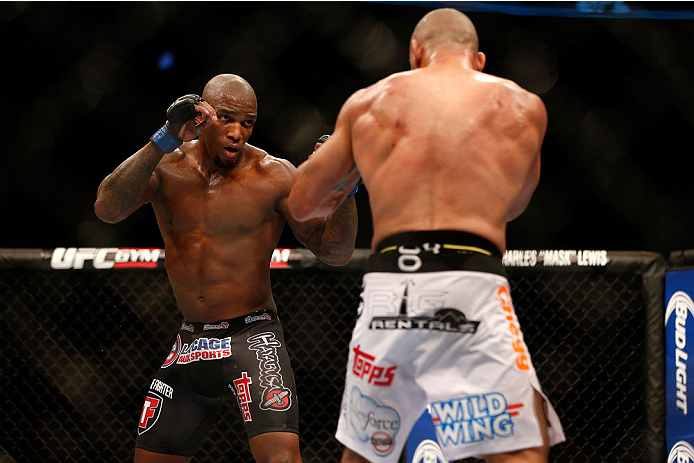 The passport of Francis Carmont is impressive to say the least, with stops in England, the Netherlands, Sweden, Tunisia, Australia, Russia, and Costa Rica, just to name a few. But as the middleweight contender settles in for his Brazilian debut this Saturday in Jaragua do Sul, he wants to be clear: just because you’re in an exotic locale doesn’t mean you’re sightseeing. For him, these trips are all about business.

“Fighting in a country doesn't necessarily mean enjoying the country as much as I would love to,” he said. “When fighting is your living, you arrive in a country with a completely different mindset than for vacationing.”

He will admit that the Brazilian heat and beaches are a lot more agreeable than the subzero temperatures and snow in his adopted home of Montreal, but when it comes to this week’s assignment against fellow contender Ronaldo “Jacare” Souza, there is even more attention to the task at hand than usual.

“The Jacare fight is the biggest challenge of my career,” said Carmont. “He is strong in all areas and is a world class fighter. He is a BJJ world champ and his striking improved a lot. His fight against (Yushin) Okami was very impressive. I respect him in every aspect of the fight game.”

That kind of respect isn’t reverential, but healthy, since Souza is not just one of the top submission artists in the sport today, but one whose striking is catching up rapidly, as evidenced by his first round blast out of longtime Japanese contender Yushin Okami last September. So what do you do to beat a fighter like that? You do what Carmont has been doing throughout his current 11 fight winning streak: you think two steps ahead, you keep your opponent guessing, and you make them uncomfortable. Doing that may not always be pretty, but the proof is in the Ws.

“Everybody will tell you how the mindset is important,” he said. “You can be the best technical fighter in the world, but if mentally you're not there you won't last long.”

So when you talk with Carmont about MMA math, about being ranked eighth in the world and how a win over the third-ranked Souza could have him closing in on a title shot, he’s not interested in such matters. He’s got enough on his mind thinking about Jacare without adding more to the plate.

“I am getting slowly toward my goal but I try not to think about it too much because it puts unnecessary pressure,” he said. “I try to focus only on Jacare, not on everything that surrounds a win over Jacare.”

That’s precisely why Carmont has won all six of his Octagon bouts and is a top ten middleweight. Everything is about the fight in front of him, not the one down the road. It’s a philosophy that Georges St-Pierre perfected during his second reign as UFC welterweight champion, and even though GSP is on hiatus from the sport as an active fighter, he has been right there every step of the way for his friend during this training camp.

“Georges' break couldn't have come at a better moment for me,” said Carmont, who will be cornered by the former champ this weekend in Brazil. “He was there with me every day and was involved 200% in my camp.  I am lucky and grateful.”

Luck has had nothing to do with his success in the UFC though, because no one goes 6-0 here by chance. On Saturday, Carmont will fight Souza in the biggest bout of his career, but the way he sees it, even after more than two years in the Octagon, he’s just getting started.

“I am so happy to have been in the UFC over the last two years,” he said. “It's only the beginning. (In 2014) the fans should expect a win over Jacare and many other great performances.”