"I expect a fight. And if he sits there and wants to fight and not run away, I’m gonna knock him out.” 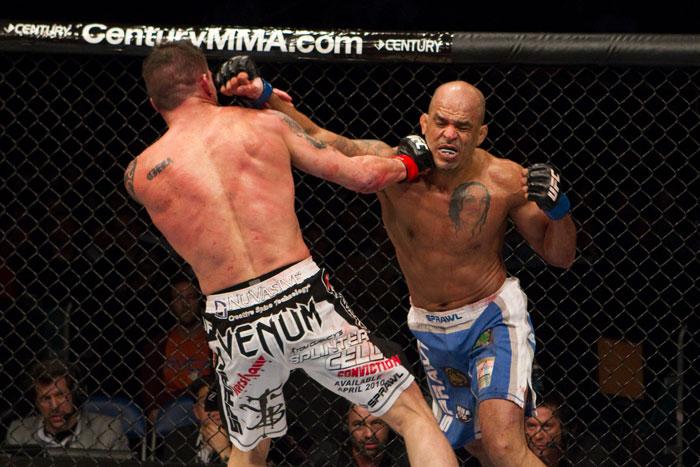 “Michael Bisping and I share a birthday,” laughs Jorge Rivera, born on February 28, 1972, the same day his opponent at UFC 127, Bisping, was brought into the world seven years later. “One of us is gonna have a happier birthday than the other.”

If the soon to be 39 year old Rivera appears to be having a good time in the lead-up to the biggest fight of his career this weekend, that would be an accurate assessment. One only needs to check out the series of youtube videos “El Conquistador” and his team have fired off at Bisping in the past few weeks for proof of that. Watch the videos

But beyond the laughs and good times that come with following the resurgent Rivera these days, there is still an edge that reminds you that when the gloves are taped on and the Octagon door shuts, he is a fighter. And Rivera wants nothing more than to trap Bisping in a fight.

“The way I look at Michael Bisping is he’s a points fighter,” said Rivera. “I would never give him a title shot fighting the way he fights right now because he’s not exciting – it’s constant decisions. No one wants to see a guy that’s always ending up in a decision. And if it is a decision, at least smash a guy out. He doesn’t – he runs.”

It’s pecks and pokes like these that have buzzed around Bisping’s head in the lead up to the fight, and while he’s mostly kept a cool head in response, it’s obvious that he’s seething at the abuse he’s been taking on the internet, especially considering that he thinks he’s fighting someone who’s not in his league.

“He thinks he’s above me and I find that hilarious,” said Rivera, who isn’t smiling anymore. “Anybody that fights in that cage can kick your ass. You go in there thinking that you can walk through me…”

“I hope he’s training hard because I am.”

A veteran with nearly a decade in the pro game, Rivera has never been one to mince words, but he’s also not one to engage in a trash-talking campaign against his opponents. Of course that hasn’t stopped him from being a participant in plenty of punishing brawls where either he or his opponent wound up on the bad end of a knockout. Where he comes from - Framingham, Massachusetts - your fists speak louder than any words can.

So in the weeks leading up to what should have been his most recent fight, against Alessio Sakara at UFC 122 in Germany last November, there were no ill words spoken, just a mutual respect between two 185-pounders who were going to fight like bitter enemies for 15 minutes or less on event night.

But there would be no fight, as Sakara fell ill on the day of fight and the bout was canceled.

“It’s really weird because I never had something like that happen,” said Rivera. “As soon as they told me that, all I wanted to do was go take a nap. It was a huge adrenalin dump. I went from being pumped up to being like ‘what am I gonna do?’ What do I do now? Do I hang out in the back, do I go watch the fight?”

Rivera soon came up with something to do.

“I sat there for a few minutes, had a couple drinks, and started talking s**t. (Laughs) And it got me what I wanted and here we are.”

The talk that day in Germany centered around one person – Michael Bisping. And amazingly, it got him the fight. It’s almost as if he won the Sakara fight and moved on to bigger things – a UFC 127 co-main event in Australia.

“It’s weird and it is like that,” he said. “I have nothing but the utmost respect for Alessio. I know he wanted to fight, even being sick. But it was a win-win for me. The UFC took care of me, and I got paid even though I didn’t get a scratch on my face.”

And he got the man he wanted to fight, the pride of UK MMA and one of the bigger names in the sport. If Rivera wins, that’s four victories in a row and the most improbable of comebacks will add another chapter. And let’s not mince words because no one, save Rivera’s teammates and family, thought he would make it here after his first round losses to Terry Martin and Martin Kampmann in 2007-08. Sure, he fit a first round knockout of Kendall Grove in between, but that was going to be his fighting epitaph – win some, lose some, but never have the consistency to take it to the next level. And when his daughter Janessa tragically passed away in 2008, that was the crushing blow you couldn’t imagine him rebounding from.

But he did. Slowly, but surely, he beat Nissen Osterneck, then Rob Kimmons, and then Nate Quarry, looking more impressive with each outing. At 38, Rivera had finally arrived, had consistency on his side, and now he has a chance to show the world just what he can offer on the sport’s premier stage. Ask him if he ever thought he’d get here, and he’s brutally honest.

“I remember going into the Osterneck thinking if I lose, this is it. The same thing with the Kimmons fight. The Quarry fight I had a little more confidence and now I realize that I can do this. And I’m excited.”

And after everything he’s been through, a little pre-fight banter with an opponent is not likely to make him nervous.

“There’s nothing that Michael Bisping can do to me that hasn’t been done to me in my life already,” he said. “He’s running his mouth and I don’t care.”

Rivera’s not looking past “The Count” though. He knows that he has a fight waiting for him at the Acer Arena.

“It’s a good fight. He’s got good cardio, he’s got decent standup, he’s been working his ground and pound. He fought Dan Miller and Denis Kang, who are both very good black belts and they weren’t able to submit him, so at the very least, he can avoid submissions. He’s also got decent takedowns, so it’s not like I’m thinking that he’s gonna be a walk in the park. I expect a fight. And if he sits there and wants to fight and not run away, I’m gonna knock him out.”

Former heavyweight boxing champion Mike Tyson was quoted over the last few years as saying “you’re smart too late and old too soon.” At 38, Jorge Rivera seems to have found that balance between knowing what it takes to win in this game and still having enough left in the tank to achieve it. Sure, it would have been nice to figure all that stuff out five years ago, but he doesn’t drive himself crazy with thought like that.

“I used to do it all the time, but you really can’t do that in life,” he said. “If I hadn’t had the experiences that I had during that time, I wouldn’t be who I am now. I learned a long time ago that doing that is useless, it doesn’t even serve a purpose. I don’t bother doing that.”

And hey, everybody loves a good comeback tale.

“I think it’s a story that a lot of people can relate to,” said Rivera. “In life we all have our struggles and it’s how we handle them and how we persevere. I’m flattered, I’m grateful, and I appreciate all the love and the fanfare, I really do. We’re in this life together and I acknowledge that, and I need people around me. I appreciate the love and I want it, and I want to reciprocate it to everybody who gives it to me. We’re all human, we all experience the same things, we all feel the same things, and we all want the same things. I think once we acknowledge that, we push forward to a higher level.”

This weekend, Rivera keeps pushing. And no matter the outcome, this is one crazy rollercoaster ride that he’s not ready to get off yet.

“I enjoy it a lot more,” he said. “And so is my family. The thing that matters to me most in this life is that we’re in this together. I’m not doing this alone. They’re there for me and they support me, and I’m so grateful. I really am. My life is sweet and I really can’t complain.”