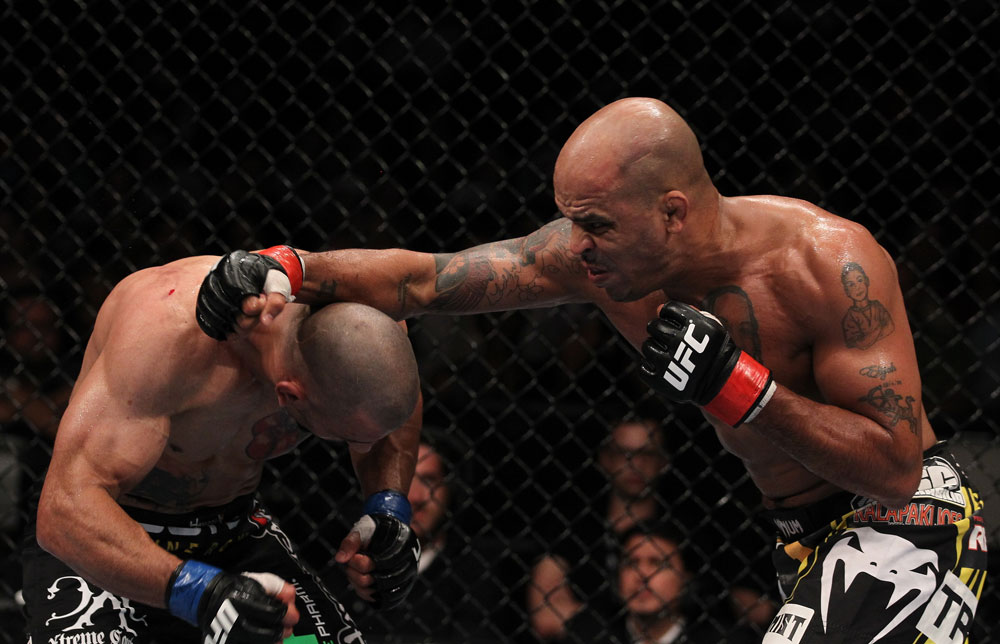 Professional fighters are just like you and me. They can’t pick fights correctly either.

“I’m a fan, and I’ve gone to fight cards where I’ve picked every single fight wrong,” laughed UFC middleweight veteran Jorge Rivera. “You would think I know what I’m talking about, but you don’t, and that’s what I love about it.”

Always candid, especially when it comes to his beloved Boston teams, Rivera’s enthusiasm always amps up a notch or two when it comes to the sport that has been his life for the last 11-plus years, and even though he’s approaching the big 4-0 in February, his love for the fighting life hasn’t waned.

It’s something many thought we wouldn’t hear again after his UFC 133 bout with Costa Philippou last August. Rivera dropped a three round split decision in that fight, his second loss in a row, and pre-fight interviews seemed to center more on his fighting future than his fight.

“I felt like someone was kicking me in my ass and telling me ‘hey, have a good trip,’” laughed Rivera, who believes that saying he can’t fight forever got misconstrued into this is the last roundup. But he’s back, and looking forward to getting back into the win column against submission ace Schafer.

“I think it’s gonna be a striker vs. grappler match,” said Rivera. “Eric is durable, he can take a beating, and he’s a tough guy. But his strength is obviously on the ground. And I see him using his jiu-jitsu and his wrestling to get me there and try to keep me there. I’m looking to keep him up and chip away and knock him out. I don’t see the fight being a fast one; I actually see this fight lasting a little while, into the second or third round, and I expect a good, grueling fight for me. It’ll be fun.”

Only a fighter will describe a grueling 15 minute battle as fun, but that’s truly where Rivera is at home, and if he can get in a back-and-forth, action-packed scrap, he’ll feel a lot better about that than the fight against Philippou, a match expected to be an all-out war but that settled into something a lot less than that. The fans weren’t the only ones surprised either.

“I think in the first couple exchanges that we had, I think I hurt him and I don’t think he wanted any part of it,” said Rivera of the Philippou bout. “I’ll go even further on it, and it surprised me that he would just hold me against the fence. The guy was strong, I’ll give him that, and it was frustrating me because he had the ability to just hold me against the fence. I don’t want to exert all my energy peeling a guy off me and then have no pop in my punches. So I’m playing a game in my mind as I’m fighting him, and in the back of my mind I’m going ‘I thought you were a pro boxer?’ (Laughs)”

He’s not complaining though.

“That’s the beauty of the sport, and that’s what I love about MMA. It’s so unpredictable. You think you have a handle on stuff and you really don’t, which, in my opinion, is awesome.”

Rivera can be objective about the bout now, and after 27 pro bouts, he’s realized that it’s not always about the wins and losses, but about the battle, and about everything that surrounds the fight – the training, the sacrifice, the fans, and the bright lights. It’s safe to say that the Massachusetts native dubbed “El Conquistador” has done all right for himself in the fight game, and as he prepares to open his new gym in Milford, the Rivera Athletic Center, the first week in February, he’s eager to pass on what he’s learned to a new generation.

“Other than training, this has been the focus of my life for the last couple months, and it’s coming together nicely,” said Rivera of the gym. “It will be ready to go when I get back home, and am I ever pumped. It took me three years to get it up and running, but I found the spot, and I’m just ecstatic about it.”

And when it comes to preaching the gospel of MMA to the masses, you won’t find a better representative than Rivera.

“I love MMA and I love living the martial arts life,” he said. “I know it’s gonna sound cliché and corny, but it provides you with the principles of life that you need – discipline, perseverance, persistence, humility. All these things you need to be a good person, martial arts provides these for you. I know firsthand, and if I could help other people with it, I want to. It’s my passion.

“I went from a guy who was a nobody living the life of a lowlife to a guy that’s something of a common name in a lot of households,” Rivera continues. “It gave me a job, it gave me a career, it gave me income, and it gave me something that I love to do. Before, I hated my jobs. (Laughs) I enjoyed the people that I worked with for the most part, but I always hated my boss, no matter who it was. It gave me a greater appreciation for what I do now.”

What he does now is fight, and as sentimental as he gets when talking about the sport that saved him, he still will have no qualms about punching Eric Schafer in the face when the bell rings for their middleweight bout. It’s what he does, and while he doesn’t concern himself with predictions – and wisely so – he does reveal what will happen on fight night.