Rivera Has Change In Mindset Ahead of UFC 238

“I didn’t fight how I should have fought and that’s what kills me,” he added. “I’m upset with myself because I know I can do better. I know I can come out with a better performance.”
By E. Spencer Kyte • Jun. 5, 2019

Remember when you were young, did something careless or stupid and your parents hit you with the old “I’m not mad; I’m just disappointed” line that has a way of cutting you to your core?

That’s how Jimmie Rivera feels in regards to his performance against Aljamain Sterling back in February.

“I wasn’t really up for that fight,” said Rivera, who seemed sluggish for the majority of the three-round affair, which Sterling won by unanimous decision. “I went in there and didn’t fight — I showed up and coasted the whole fight.

“I didn’t fight how I should have fought and that’s what kills me,” he added. “I’m upset with myself because I know I can do better. I know I can come out with a better performance.”

No one would argue that Rivera isn’t capable of more.

After putting together an incredible eight-year, 20-fight run of success that extended through his first five appearances in the Octagon, the 29-year-old Team Tiger Schulmann representative got caught by bantamweight title hopeful Marlon Moraes in their headlining clash in upstate New York last summer before rebounding with a good win over John Dodson and his uninspired showing against Sterling earlier this year. 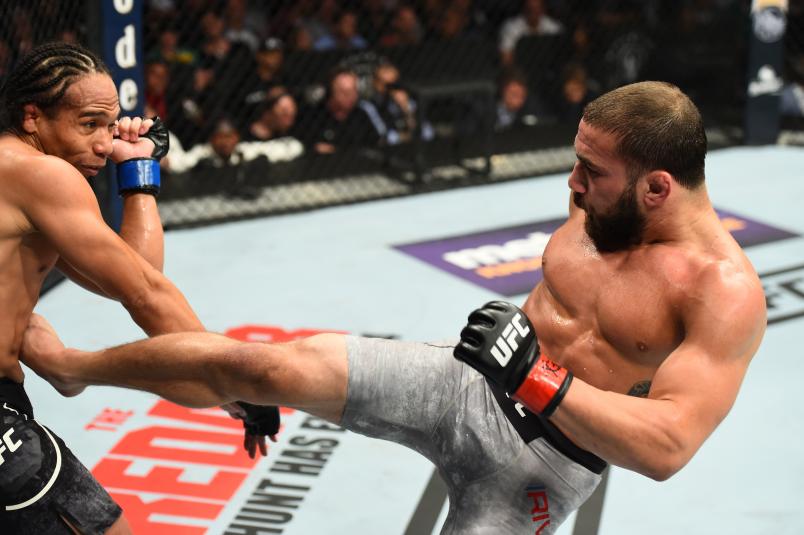 While the loss to Moraes is the one that snapped his impressive winning streak, it was also one of those “just got caught” scenarios that can happen to anyone in this sport. They walked into the center, started getting into a rhythm and BAM! — the Brazilian planted his left leg on the side of Rivera’s head, sending him crashing to the canvas and Moraes into celebration mode.

But the fight with Sterling was the exact opposite — a 15-minute slog where Rivera simply couldn’t get going, even as his coaches implored him to wake up and get after the Serra-Longo Fight Team member.

Five months later, Rivera is still irritated by his lack of effort, but has made adjusting his mindset and making sure he’s ready for battle the focus of his training camp as he readied for this weekend’s showdown with rising star Petr Yan.

“ (I have to get into the mindset) that I want to get in there and beat the s*** out of this guy,” Rivera said of the changes he’s made in advance of Saturday’s UFC 238 meeting with the emerging Russian contender. “I have been putting a lot of attention on focusing, visualizing what I need to do, getting my mind up, getting ready and going in for rounds where whoever I’m training with is Petr Yan.

“That was one of the biggest changes this camp: the person in front of me was always Petr Yan and I’ve got to take him out.”

Four men have tried to take out Yan over the last 11 months and change and so far, none have come all that close as the 26-year-old has posted impressive victories over Teruto Ishihara, Jin Soo Son, Douglas Silva de Andrade and John Dodson to catapult himself into the thick of the bantamweight title chase and establish himself as one of the most dangerous up and coming talents on the roster.

With each successive victory, Yan has quickly lobbied for the chance to face another opponent stationed ahead of him in the rankings and then showed little concern about the man the UFC has offered up.

It was no different when he was paired off with Rivera, not that it matters to the man he’ll share the cage with this weekend.

“He wants to f*** me up and I want to f*** him up and we both want to say, ‘Who’s next?’ — I’m just the one that doesn’t say it and he’s the one using it to draw attention to himself or whatever,” replied Rivera when asked about Yan’s pre-fight comments. “I don’t have any beef with anybody, but If you want to talk s***, whatever — I just won’t show you any respect.

“When we get in there, I’m trying to take your head off,” he added. “We can be cool before and we can be cool after, but during the fight, I’m going to try to beat the s*** out of you. Petr Yan can say whatever he wants. Does it get to me a little bit? No, I just think it’s unprofessional. He was talking all this s*** and I want to be respectful, so I’m not going to show him any respect and that’s it.”

Just as he is honest with himself about his performance against Sterling, Rivera is fully aware of the role he’s playing in Saturday’s second of three pivotal bantamweight battles set to take place at United Center.

“I kind of feel like a bit of a gatekeeper right now, but I feel like if I can get a win, especially an impressive win, a dominant win, I can get a title shot next,” said Rivera, who enters the contest stationed at No. 7 in the bantamweight rankings, two spots ahead of Yan. “This guy is up and coming, but I’ve been in his shoes — I was 5-0 before I got my first loss in the UFC against Marlon — so I understand (where he’s coming from).

And while he’s quick to praise Yan’s initial performances, the approach he takes inside the cage and the weaponry he’ll bring into battle this weekend in Chicago, the re-focused bantamweight contender knows he’s the better man and is intent on showing that Saturday night at UFC 238.

“I think he’s good, but I think I’m better,” said Rivera, stating the facts as he sees them. “He’s good and I think he’s tough, but I’m better.

“It’s either a finish or a f****** war,” he added, suggesting this fight could look very similar to his back-and-forth scrap with Pedro Munhoz from November 2015. “That’s what I see, that’s what I picture and I’m really looking forward to a fight.”