Rivera Fighting to Find His Father

"I’m always looking for the finish. I’ve been watching his
fights and I hope he’s ready." - Francisco Rivera 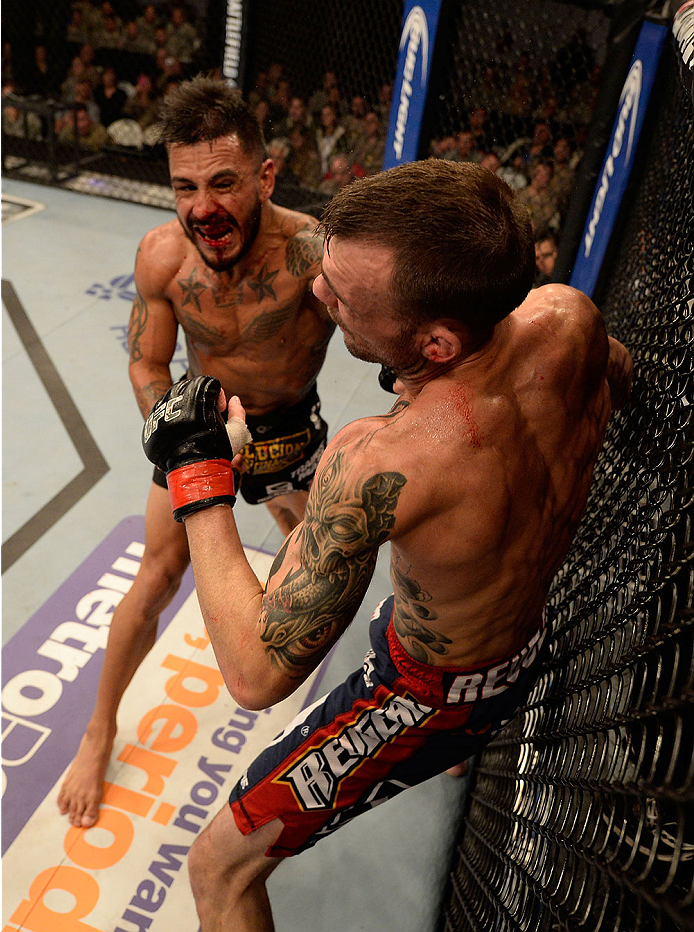 When Francisco Rivera takes on Takeya Mizugaki Saturday night on the main card of UFC 173, it will mark the first time that the 10-2, 1 NC knockout artist has fought on Pay-Per-View.

Owning a six-fight unbeaten streak since being released by the organization after a June 2011 loss to Reuben Duran, the dangerous knockout artist has quietly been working his way up the rankings, building a solid resume and heavy-hitting highlight reel in the process.

In a division where champion Renan Barao is turning aside challengers every three to six months with relative ease, Rivera’s run of success could land him in contention, especially if it continues with a win over a durable veteran like Mizugaki this weekend.

From a career perspective, it’s a positive step for the Buena Park, California native and one that could elevate him to greater heights within the division.

“It’s a perfect match-up for me,” says Rivera of the fight that will serve as the second on this weekend’s main card. “Mizugaki is a veteran that has been around for a long time, he’s never been knocked out, and he’s real technical. He’s one of the top guys in the bantamweight division, so it’s a huge fight for me.

“We’re on a Pay-Per-View card, so I finally get to show the world my skills and, against a guy like Mizugaki who likes to stand and throw a little bit, it’s definitely going to be a show.

“This is going to be one of the best fights of my career and I can finally show all the fans that I belong in the UFC and they continue to put my fights on the Pay-Per-View card. I think UFC 173 (is my chance) to show the world my style of fighting.

“I’m always looking for the finish,” continued Rivera, who has earned stoppages in seven of his ten career wins. “I’ve been watching his fights and I hope he’s ready - there are a lot of openings and he’s been tagged in every one of his fights, but I’m a different type of fighter. It’s a matter of being smart and technical against a veteran guy like this - he knows his stuff, so I know it’s not going to be easy.”

Originally scheduled to face Raphael Assuncao in February, a hand injury forced Rivera to withdraw from that contest. Fully healed, he jumped at the opportunity to step in against Mizugaki when his initial opponent, TJ Dillashaw, was tabbed to face bantamweight champion Renan Barao in the show’s main event.

“I was talking to my manager before the Assuncao fight - before I pulled out. I kept training because it was a big fight also, but I just couldn’t punch anymore, so I called my manager to call (UFC matchmaker Sean Shelby) and let him know that I needed time off to heal this thing or else it was never going to heal. I got it casted up for a couple weeks, did therapy for a couple weeks and it’s a lot better now.

“So we called Sean and told him we’re ready,” he adds. “A couple weeks later, he gave us a call, told us the situation and we accepted it. There is no bigger opportunity and now is the time.”

Sporting staggering power for the 135-pound weight class and brandishing in a “swing until someone gets knocked out” approach, Rivera is the type of fighter that could become an instant fan favorite with the right performance on the right platform.

Five of his last six appearances have ended inside the distance, including his two most recent outings - come-from-behind finishes of Edwin Figueroa and George Roop at UFC 156 and the third Fight for the Troops event, respectively.

Always ready to tuck his chin and trade punches, you’re assured an entertaining fight when Rivera steps into the Octagon.

“My aggression is really a big key for me. I’m very aggressive,” he says with a laugh. “I don’t know why I’m so aggressive - maybe my upbringing. Sometimes I don’t care and just kind of come forward and I love to stand and put on a show. A lot of these guys think that I’m one dimensional, but in reality, I prefer to stand and keep it standing for as long as I can until the fight is over.

“I don’t mind getting hit. If you like getting hit, we’re both going to stand there and get hit, and I believe that my power is a lot greater than a lot of guys at this weight class. As you guys can see the last couple fights, I’ve been knocking out guys that have never been knocked out. It goes to show that if I hit you, you’re pretty much going down.

“Even if I get knocked out, as long as I’ve put my all into a fight, I think the fans are the most important thing, and they love to see a stand-up war and people get knocked out.”

But this weekend’s bout is about much more than going toe-to-toe with Mizugaki and introducing himself to a new audience.

Rivera’s parents split up when he was little - “I was about two years old,” he says - and the 32-year-old fighter hasn’t seen or heard from his father since he was 10.

Coupled with the UFC’s recently announced plans to hold their first event in Mexico City, Rivera sees Saturday night’s main card contest as a chance to share his story on a grander scale in hopes that someone that can help in his quest to find his biological father.

“I’ve been trying to find him for a while and I’m hoping this will be a huge opportunity to reach out and hopefully get some people from Mexico to help me find my father,” offers Rivera. “Growing up, he was always working. I remember him going to work - going to work, going to work - and then my mom would drop us off at his house every other weekend. One day it just stopped. I didn’t know why. I was just a kid, so I didn’t ask any questions.

“My dad was really Hispanic - all he spoke was Spanish and I didn’t know that much Spanish growing up, so he would talk to us, but I didn’t really know what he was saying. Now that I’m older and now that I’m a father, I’m dying to find him. I really want to look for him and find out if he’s still alive. I have his first and last name - I’m a Junior and he’s the reason for that, and I just want to know him.”

Rivera can’t hold back the tears. Sentences come out in a staccato rhythm between gulps of air and sniffles as he tries to compose himself.

“It’s huge for me,” he says quickly, the emotion washing over him. “Sorry, it’s hard for me to talk about it. Being a father now, I realize some of the stuff, maybe it wasn’t his fault. Maybe it was my mom’s fault or just the situation.

“I know how it is now to deal with my son’s mom and stuff,” continues the father of two-year-old Joshua and one-year-old April. “I just wish he could see how far I’ve come. I don’t know if he knows, but I just remember him working a lot, giving my mom money to buy us things, and I’m just trying to reach out, try to find him, see how he’s doing.

“I know the UFC is going to Mexico - he has family over there, I have family over there and it would be huge if he knew that I was part of the UFC, let alone one of the biggest Hispanic UFC fighters out there.

“There are a lot of questions that I don’t have answers to, you know?”

After 10 seconds of silence and a few deep breaths, Rivera continues.

“All I think about is my son and daughter. It drives me crazy thinking about them being sad or not having things. The way they love me - and I didn’t realize that until now…”

His words trail off; thoughts of his own children and his fractured relationship with his father reducing him to tears once more.

“I really don’t talk about him because it makes me upset, but it’s going to drive me that much harder,” he says of his father and his quest to find him. “Eventually, someone is going to see me or tell him - it has to happen.”