Rivera determined to enjoy the process above all else

One day, Jimmie Rivera will jot down a few words about his life, and when he looks back at the Christmas of 2017, those words might be a bit harsh.

“It was a horrible Christmas,” he said. “I didn’t get to fight and I didn’t get to enjoy time with my family. We set up some weekends in January to spend time, but not everybody has off at the same time. When it comes to the holidays, everybody obviously has off. So I saw some family here, some family there and that kind of stuff. But you’ve got to work with what you’ve got and go from there.” 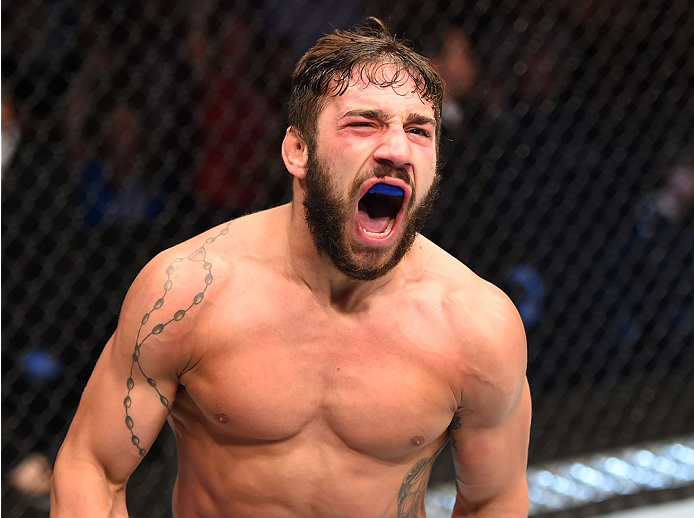 Rivera was in Las Vegas on December 25. He was originally supposed to face Dominick Cruz five days later at UFC 219, but Cruz was forced out of the bout due to injury. Then John Lineker was the opponent, but on Christmas Eve, the Brazilian was pulled from the fight due to a tooth infection. No fight, no Christmas.

“There’s nothing you can do,” Rivera said. “John Lineker was sick and had to get surgery right away. It’s part of the business that you have to deal with.”

But the question is, how does Rivera’s wife Samantha deal with him?

“She grew up in the martial arts, and she started training when she was younger than me at three. Her dad actually coached me in my first amateur MMA fight. I know her and her dad since I was a kid, so she understands that. I’m lucky.”

Rivera’s ability to accept the lows as well as the highs of the fight game isn’t surprising, as he’s always been a pro in and out of the Octagon.

Those good habits haven’t just aided him on his MMA journey, but it’s provided an example for the next generation of fighters on the TS MMA team that look up to him.

“It’s so important to be professional, and not only that, but it’s also about the work ethic,” Rivera said. “We work hard and push each other to help us get ready for fights that are coming up, and that’s good. We’re a team but, at the end of the day, you can call us a family. We’re really close with one another. And you can’t just tell people to do it, you’ve got to lead by example.”

That example has led the No. 4-ranked Rivera to a main event slot against the No. 5-ranked Marlon Moraes Friday night in Utica. It’s not just another fight between two top contenders, but one with plenty of heat behind it, as the two New Jersey products have been sparring verbally and on social media for months. Rivera likes the heat.

“It fuels the fire,” said Rivera, who wasn’t exactly looking for the fight, wanting instead to fight the contenders above him at 135 pounds. But when it was presented, he didn’t shy away from it, even if he doesn’t see the Brazilian as a fighter on his level.

A fight win streak meets one of the division's newest contenders.

“I see Marlon as a guy that fought in World Series of Fighting and that (promotion) is not even around anymore,” he said. “He got a top five guy (Raphael Assuncao), didn’t win it. He had a questionable win over (John) Dodson and had a lucky knockout over (Aljamain) Sterling. He’s been lucky, but when it comes down on Friday, it’s a whole different story when you get locked in a cage with someone that’s not gonna fold so easily.”

Moraes is equally as confident of victory, but Rivera believes that confidence comes down to some old sparring sessions, not anything relating to recent form.

“Marlon thinks he might have the upper hand since we trained a couple times,” he said. “He’s thinking I’m gonna come in and fight like I fought when I trained with him two years ago. But I’m never the same in the gym as I am in the Octagon. It’s very different and the mentality’s different. There are guys who can be really good and they get the best of you all the time in the gym, but when they get under the lights, they’re not the same person. I think one of the things Marlon and other people neglect and underestimate is that I can really switch it up and change up my style depending on who the person is.”

But will all the back-and-forth between the two lead to Rivera letting emotions get the best of him when the Octagon door shuts? “El Terror” did get a little amped up in his last fight, a three-round decision win over Thomas Almeida.

“I was trying to knock him out,” he admits. “I rocked him and in my head I’m like, ‘No no, don’t grab me, don’t grab me. F**k, he grabbed me, I’m not gonna be able to finish.’ (Laughs) In my head I have conversations, then I go to my corner and talk about what’s going on, and I go back out there and focus on the game plan or switch it up. I’m definitely engaged in the fight, not just physically but mentally.”

And most importantly, he’s loving it all. That won’t change on Friday.

“I think one of the biggest things is that you’ve got to enjoy it,” Rivera said. “It doesn’t matter win, lose or draw; the people you care about are still gonna love you. So you’ve got to go in there, have a fun time and enjoy it. This is a once in a lifetime opportunity, so you’ve got to make the most of it and have fun with it. I train my ass off, but I enjoy it.”