Rivera Determined to Bounce Back in Dallas 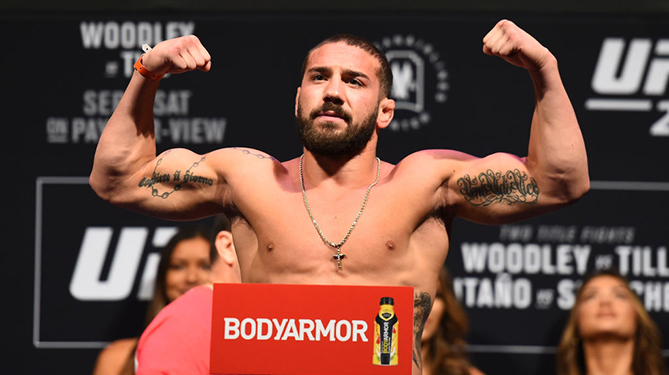 Jimmie Rivera didn’t need to be dealing with the electric company, not on one of the hottest days of the summer, not in the middle of training camp for his Saturday bout against John Dodson. But as B.B. King once sang, he’s paying the cost to be the boss, so he did what he had to do to make sure his Tiger Schulmann dojo in NYC had power.

In other words, business as usual for Rivera, who doesn’t sweat the small stuff.

“I don't stress over something like that,” said the bantamweight contender. “There's always a bright side. We've had times here when the school's flooded because something happened on the fourth floor, which isn't even our floor, and we had to train with half a mat. But we're gonna train, that's it. You roll with the punches and go with it. And that's the way I've always been.”

That attitude extends to his job as a prizefighter, where he’s not going to let one bad night deter him from his path. In June, Rivera saw a 20-fight win streak snapped by Marlon Moraes, who halted him 33 seconds into the first round. But “El Terror” dusted himself off and moved on. No excuses, no long layoff, no re-evaluation of everything that got him to those 20 wins.

“He caught me with a good kick,” Rivera said. “I thought he was going to the body and it hit me in the head.”

He laughs, recalling a sequence that probably lasted a second but felt like ten ticks of the clock.

“I'm like, ‘F**k, it was going to the head, not the body.’ But it happened. The only thing I'm super happy about is that I came out of the fight with just a little bump on my head, no concussion, and I lined up another fight.”

A week after the Friday night bout, he was even back in the gym, much to his wife Samantha’s chagrin.

“My wife tried to keep me out of the gym,” he said. “She said, ‘At least give me a week.’ By Friday, I was in the gym training. Hey, it was a week. You go in there, you get caught, I come out and I was fine. I was a little upset, obviously, but I said let's just get right back in it.”

Soon after, Rivera had a fight with fellow contender Dodson. It’s the kind of bout that can put the winner back in the title race, and while the New Jersey native isn’t talking about a crack at TJ Dillashaw yet, he does see this bout as an important one, not just for his career, but to prove that one setback is not a death sentence.

“That's always been my attitude,” he said. “I get knocked down, I get back up and try harder. It's nice to have that once in a while. I'm not saying you should lose, but if you do lose, you get that taste, and it makes you work harder. It's not gonna stop my career just because I lost a fight. People go through challenges throughout the day and people get knocked down, but the biggest thing I tell people is that it's not what happens when you get knocked down, it's what you do afterwards.”