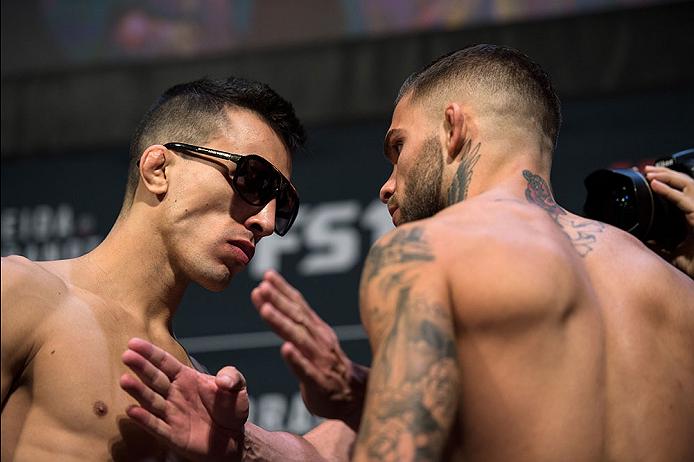 Thomas Almeida and Cody Garbrandt face off during the UFC Fight Night: Weigh-Ins inside the Mandalay Bay Events Center on May 28, 2016 in Las Vegas Nevada. (Photo by Brandon Magnus/Zuffa LLC)" align="center" />The superstars of tomorrow usually get their crack on the big stage at an FS1 Fight Night.

UFC megastar Conor McGregor began his meteoric rise on the network in a five-round main event against Dennis Siver back on Jan. 18, 2015. After that epic night in Boston, McGregor was one of the most talked about names in all of combat sports.

Tonight bantamweights Cody Garbrandt and Thomas Almeida, two KO-thirsty, blue-chip prospects sporting perfect undefeated records, collide in one of the most pivotal main events of the summer in Las Vegas at the Mandalay Bay Events Center at 9pm/6pm ETPT.

Almeida (21-0) has taken the UFC by storm, posting four straight wins since his arrival which include three highlight reel knockouts. Garbrandt (8-0) may not have the huge win number next to his name, but in his UFC outings he’s been magnificent, posting a pair of knockouts in the process.

Almeida and Garbrandt know what hangs on the line when they meet in Las Vegas. Title dreams burn deep for both fighters and a win against an undefeated top tier contender moves the winner’s name closer to the No. 1 contender spot.

“With a win over Thomas Almeida it will put me right in the front running for title contention,” Garbrandt said. “I have to come out here and finish him in a vicious way.”
With five UFC knockouts between them, Almeida and Garbrandt is an almost guarantee to deliver big moments and an electrifying finish.

Almeida doesn’t know any other way in a fight than to look for the finish.

“I have an aggressive fighting style. It’s a more technical style – I’m always pursuing victory,” Almeida said. “I try to win by knockout or submission when I have the opportunity. I don’t like to leave it in the hands of the judges.”
When the fight starts the standup exchanges will be a special mix of speed and power. Almeida brings a classic Muay Thai strategy into the Octagon, while Garbrandt possesses more of a crisp boxing arsenal.

Almeida will attack with fists, knee and legs from all angles. Garbrandt has a wrestling base to fall back on, but his go-to plan of attack will be his aggressive and swarming punching barrages.

“I intend to move forward in the fight and not let my opponent enjoy the fight. That’s what I got to bring to MMA from what I learned in Muay Thai,” Almeida said. “I will defeat Cody Garbrandt because he’s standing in my way. I have to beat him if I want to be champion. I will fight for five rounds if necessary but I think I will knock him out.”

Sitting at No. 7 in the bantamweight rankings, Almeida likely catapults his name into the top five with a win over Team Alpha Male’s “No Love.” And Garbrandt will make his debut in the rankings for sure with a win over Almeida.

“I like to sprawl and keep it standing and go for that knockout each and every punch; and each and every combo that I throw,” Garbrandt said. “I’m going to send a message to the whole division that my time is now.”