The promising 28-year-old welterweight is, like a lot of his contemporaries and counterparts on the UFC roster, his own harshest critic, and while he doesn’t only see the elements that need improvement and think about what didn’t shake out as intended, he’s not exactly quick to search out the positives from a given situation either.

“It makes sense that my rookie year goes this way,” Baeza said of his first year and change on the UFC roster, which included an equal number of fights that took place and fights that were postponed. His road to the UFC also took several twists and turns in 2019.

Initially slated to face Ramiz Brahimaj on Episode 2 of last summer’s Contender Series season, Brahimaj was pulled from the bout two weeks prior when medical imagining revealed a tumor behind his eye that required immediate surgery.

Victor Reyna stepped up in his place, but the day before the fight, the Texas-based veteran stepped on the scale seven pounds over the welterweight limit, and while Baeza went out and earned a unanimous decision win, he was convinced that a contract wouldn’t be coming his way. 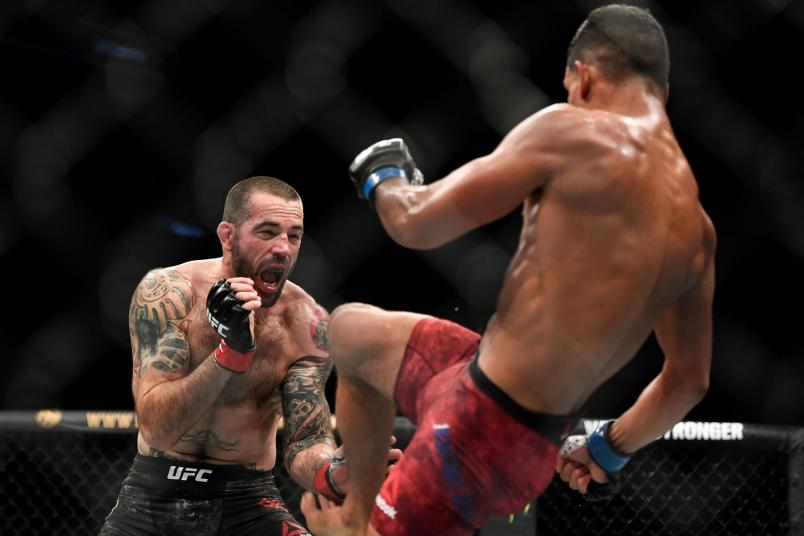 Getting it done vs Brown in Florida (Photo by Douglas P. DeFelice/Getty Images)

“The week prior, Dana White is talking about wanting guys to finish fights, so my mind was on ‘I’ve got to get this finish or I’m not making it to the UFC,’” recalled the undefeated upstart. “And getting to the UFC is only Part One of a life-long goal.

“I came close a few times, but I couldn’t seal the deal and see I that a lot of people weren’t thinking I deserved the contract and that I was picked last by Michael Bisping — I never forgot that, either.”

“You can tell what kind of guy I am,” he added with a laugh.

All his internal skepticism proved for naught as he was one of two fighters tabbed to graduate to the UFC roster that evening, and while he only managed two appearances in his first year on the roster, the South Florida resident went 2-0 with a pair of second-round stoppages to establish himself as one to watch in the talent-rich welterweight division, which, you know, is pretty dang good for a UFC freshman, especially one that had to navigate numerous twists and turns along the way.

“I guess there has been a lot of adversity that we dealt with and kind of overcame, and now we’re at where we’re at,” he said, recognizing the silver lining and sunnier outlook to how his first year-plus on the roster played out. “Now it’s about getting better and making sure that the next fight, I’m even better and I’m getting the finish.

“Doesn’t matter who it’s against — go out there, get the finish, improve as a fighter, and improve overall.” 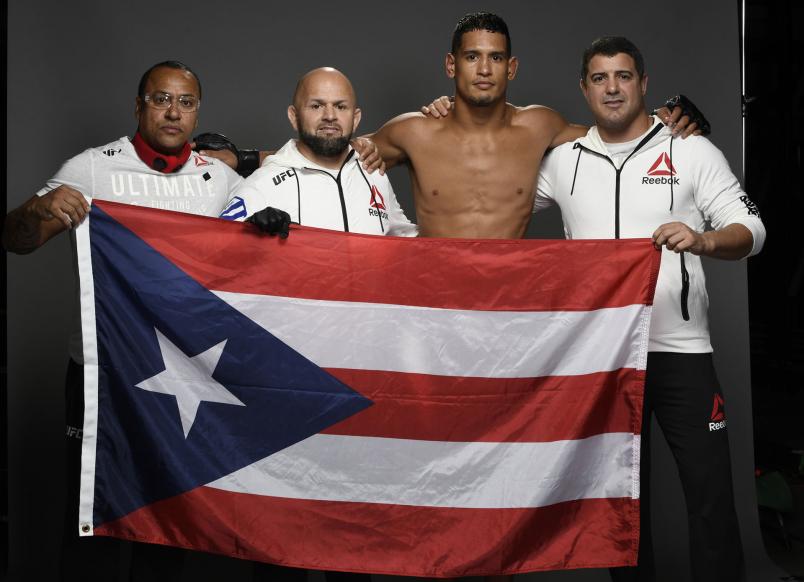 Celebrating backstage with the team, May 16, 2020 in Jacksonville, Florida. (Photo by Mike Roach/Zuffa LLC)

It wasn’t simply adversity outside of the cage that challenged Baeza in Year One either.

In his first appearance of 2020, the unbeaten MMA Masters representative was paired off with “technical brawler” Matt Brown, the grizzled welterweight mainstay, and over the first half of the opening stanza, the veteran was out in front, putting the man known as “Caramel Thunder” on shaky legs after a barrage of punches and elbows along the fence.

But just as he’s done outside the cage throughout his UFC adventure, Baeza navigated the challenges inside the Octagon as well, shaking out the cobwebs and going on the offensive over the final two minutes of the first round, sitting Brown down with a big right hand and finishing the frame with momentum in his favor.

Eighteen seconds in Round Two, the sophomore closed things out with a flourish, uncorking a left hook that put Brown on the deck and prompted referee Jason Herzog to immediately jump in and wave off the fight.

It was the kind of finish Baeza hoped would bring him increased recognition, which hasn’t exactly been the case.

“Now I’m ‘The Guy Who Beat Matt Brown,’” he said with a laugh, acknowledging that he’s getting recognized more, just not by name quite yet. “It’s not Miguel Baeza just yet; it’s ‘Hey — you beat Matt Brown, right?’

“I thought the ‘Caramel Thunder’ thing would stick too; that’s kind of one of the reasons I went for it, you know?” he added, still chuckling at his new standing as a “unknown known guy” within the MMA community. “I definitely have a little more notoriety, people see me more now — again, not as Miguel Baeza, but when you beat somebody, they recognize you a little more, so that’s a step in the right direction.”

While casual-to-moderate fight fans may not know him by name just yet, ardent observers recognize that Baeza is one of the top emerging talents in the welterweight division.

Beating Reyna to secure his UFC contract was a solid victory against an LFA staple, while his second-round finish of Hector Aldana in his promotional debut was the kind of early statement effort that helps promising upstarts get noticed.

Weathering the storm and rallying to beat Brown made it clear he was someone to watch, and this weekend, Baeza has a chance to close out 2020 and kick off his sophomore campaign in the Octagon by taking another considerable step forward in the 170-pound weight class.

Saturday night, Baeza steps in against Takashi Sato in a battle of welterweights coming off impressive stoppage victories that also doubles as a battle for South Florida bragging rights, as the Japanese fighter reps Sanford MMA.

“It depends on whom you ask,” Baeza said when asked if there is heat between the two gyms that are less than an hour apart from one another. “I’m a South Florida native and I’ve been here my whole life — I fought on the amateur and regional circuit down here, so I know a lot of the guys over there. I know them, they know me, so the guys that I’m cool with, they’re staying out of it.

“I would say it’s friendly bragging rights,” he added. “But obviously the coaches feel differently about it.”

While there may be no bad blood between the combatants, it’s a quality matchup with clear divisional significance, as Sato enters Saturday’s contest off a 48-second stoppage win over Jason Witt and sporting a 16-3 record overall.

Brown may have been a much bigger name, but the former Pancrase standout is Baeza’s toughest test to date.

“I like the matchup; I think it’s going to be a good one,” he said. “I think we’re both exciting fighters and there is a reason why they put us on the main card.”

And who knows, maybe if he gets a third straight stoppage victory, a few more people will recognize him as Miguel Baeza.