On The Rise: Vancouver Edition 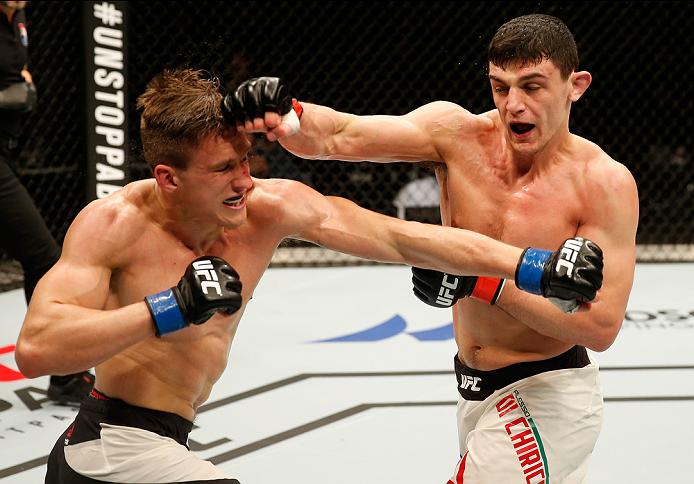 For the second time this year, the UFC Octagon heads north of the border, landing in the stunning city of Vancouver for the fourth time with the first UFC on FOX event to be held on Canadian soil.

Headlined by a welterweight clash between Demian Maia and Carlos Condit and featuring anticipated bouts featuring former lightweight champion Anthony Pettis, Dancing with the Stars runner-up Paige VanZant and Jim Miller and Joe Lauzon running back their 2012 classic, this is an event laced with familiar names and fights that reach out and grab your attention.

But earlier on the card and flying below the radar is a trio of young talents that hope to use this weekend’s event as a opportunity to introduce themselves to a wider audience and launch their careers to the next level. Neophytes to the big stage, but more than qualified to compete at this level, these three don’t intend to be going anywhere soon, so now seems like a good time for you to get familiar with them because if everything goes according to plan, you’ll be hearing much more from them in the future.

Some fighters face their stylistic opposite in their UFC debut, but Silva shares the cage with fellow kickboxer Shane Campbell in a bout that has Fight of the Night potential.

The 32-year-old Brazilian, who only made his pro debut in March 2013, has quickly collected seven victories against no defeats, including six first-round finishes. The most recent of those stoppages came in May against UFC vet Anton Kuivanen and earned the Cristiano Marcello student a call to the Octagon.

With Campbell coming in with his back against the wall and brandishing a similar, aggressive fighting style, this one could get interesting quick. Silva is a three-time kickboxing champion and two-time Muay Thai champion in his native Brazil and will be out to make an instant impression against the Canadian, so it wouldn’t be surprising if his first fight in the UFC was a memorable one.
RELATED CONTENT: Fight Night Vancouver matchups - Silva vs Shane Campbell | Di Chirico vs Garreth McLellan | Janes vs Adam Hunter

After earning victories in each of his first nine bouts, Di Chirico was handed his first professional loss in his UFC debut back in April, coming up short in an entertaining, back-and-forth scrap with Bojan Velickovic that was much closer than the words “unanimous decision” convey. For his sophomore appearance in the Octagon, the 26-year-old Italian makes his first trip to North America to compete, squaring off with Garreth McLellan in the third bout of Saturday’s fight card.

Despite catching a loss in his debut, Di Chirico showed promise in his clash with Serbia’s Velickovic, earning the nod in the final round on two cards as he pressed forward in search of the finish as his flagging opponent counted down to the final horn. With the first-time jitters out of the way, the Italian upstart should be a little more settled this time around and is someone to keep tabs on as he looks to make headway in the deepening middleweight division.

Based in Victoria, British Columbia and fighting out of Zugec Ultimate Martial Arts (ZUMA), the same gym that produced former Strikeforce women’s bantamweight champ Sarah Kaufman, Janes is the first Newfoundlander to compete inside the UFC Octagon and he’ll enter the cage with the entire province in his corner, plus a large contingent from Vancouver Island that will surely make the ferry ride in to support their friend and teammate on Saturday night at Rogers Arena.

Don’t let the fact that Janes has only competed four times since 2012 throw you off – the lanky middleweight is a legitimate prospect who struggled to find opponents on the Western Canadian regional scene as his pedigree and reputation made many potential foes hesitant to sign up to face him.

A Brazilian jiu-jitsu black belt under Adam Zugec, Janes has earned seven of his eight career wins by submission and will be looking for another when he squares off with fellow Canadian newcomer Adam Hunter in a classic “Striker vs. Grappler” clash to kick things off this weekend.