On the Rise: The Ultimate Fighter Finale

The final month of 2016 arrives later this week, and while that means Christmas and New Year’s resolutions are right around the corner, there are a number of fight cards still to enjoy between now and the day you promise that this is the year you’re going to do that thing you’ve said you were going to do starting on the opening day of January each of the last four years.

The first of this month’s five events arrives on Saturday from Las Vegas as Demetrious Johnson returns to defend the flyweight title and coaches Joseph Benavidez and Henry Cejudo throw down to wrap up Season 24 of The Ultimate Fighter. While the championship tilt and coaches’ clash that round out the card are obviously in the spotlight, this weekend’s event also offers the opportunity to get a closer look at a trio of TUF alums looking to position themselves for greater opportunities in their respective divisions heading into 2017.

This is On the Rise: The Ultimate Fighter 24 Finale Edition. 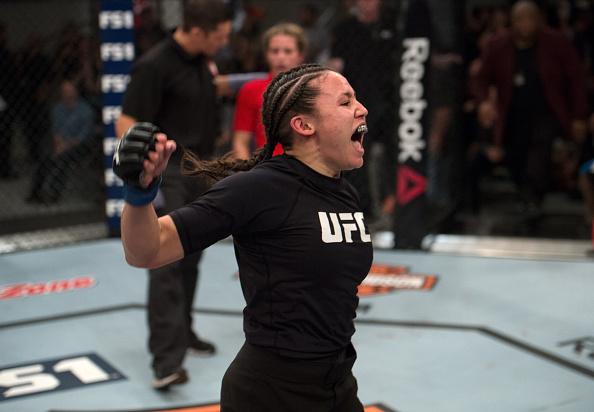 A member of the Syndicate MMA team based out of Las Vegas, Moyle posted a 3-1 mark under the Invicta FC banner before earning her way onto the cast for Season 23, where she was the second pick of strawweight champ Joanna Jedrzejczyk. The 27-year-old dropped a majority decision to eventual finalist Amanda Cooper in the opening round of the competition, an outcome that prompted Jedrzejczyk to tell off the judges, as she believed the bout should have gone to a third round.

Now more than a year removed from her last official fight, Moyle makes her UFC debut against tough Hawaiian Kailin Curran, who has gone 1-3 in her first four trips into the Octagon. This is a perfect litmus test for the debuting Moyle, who holds a win over fellow cast member and Invicta FC alumnus JJ Aldrich, as Curran remains a work-in-progress, while her aggressive style should afford the Vegas resident opportunities to launch counter-attacks.
RELATED: Matchups - Moreno vs Benoit | Moyle vs Curran | Hall vs Maynard

The winner of Season 22 of the long-running reality TV competition, Hall returns for the first time since defeating Artem Lobov in a one-sided outing last December to claim the title. After dominating “The Russian Hammer” in his freshman appearance in the Octagon, the decorated grappler gets a step up in competition for his sophomore showing, squaring off with former lightweight title challenger Gray Maynard, who got back into the win column in his featherweight debut over the summer.

Though he has a couple technical knockouts on his resume, Hall is a grappler through-and-through, possessing incredible control and an ability to attack and set up attacks from all positions. While he wasn’t able to find a finish against Lobov, the 50/50 stylist threatened throughout and spent large portions of the fight as a human backpack.

While Maynard is no longer the perennial contender he was during his prime, he is still a grizzled, battle-tested veteran with the ability to halt Hall’s momentum in a hurry. If the 31-year-old TUF winner can push his winning streak to six, he’ll start 2017 as an interesting dark horse to watch in the 145-pound ranks.

Seeded No. 16 heading into the season, Moreno is the lone cast member – other than Johnson’s opponent – to appear on this card and the 22-year-old already has a UFC win under his belt.

Having lost to top seed Alexandre Pantoja in their clash on the show, Moreno replaced Sergio Pettis on short notice opposite Louis Smolka back in October, stepping in eight days prior to the event. Before the first round reached the midway point, Moreno had collected an upset victory, catching Smolka in a deep guillotine choke and forcing him to tap to extend his winning streak to nine.

“The Assassin Baby” returns for his second appearance this weekend in a matchup with Ryan Benoit, a 27-year-old Janjira Muay Thai product who has alternated wins and losses over his first four trips into the Octagon. Most recently, “Baby Face” picked up a split decision victory over Fredy Serrano on the undercard at UFC 201.

While the win over Smolka propelled Moreno into the rankings and on to the radar, a second consecutive victory would establish him as arguably the top emerging talent in the flyweight ranks heading into next year.