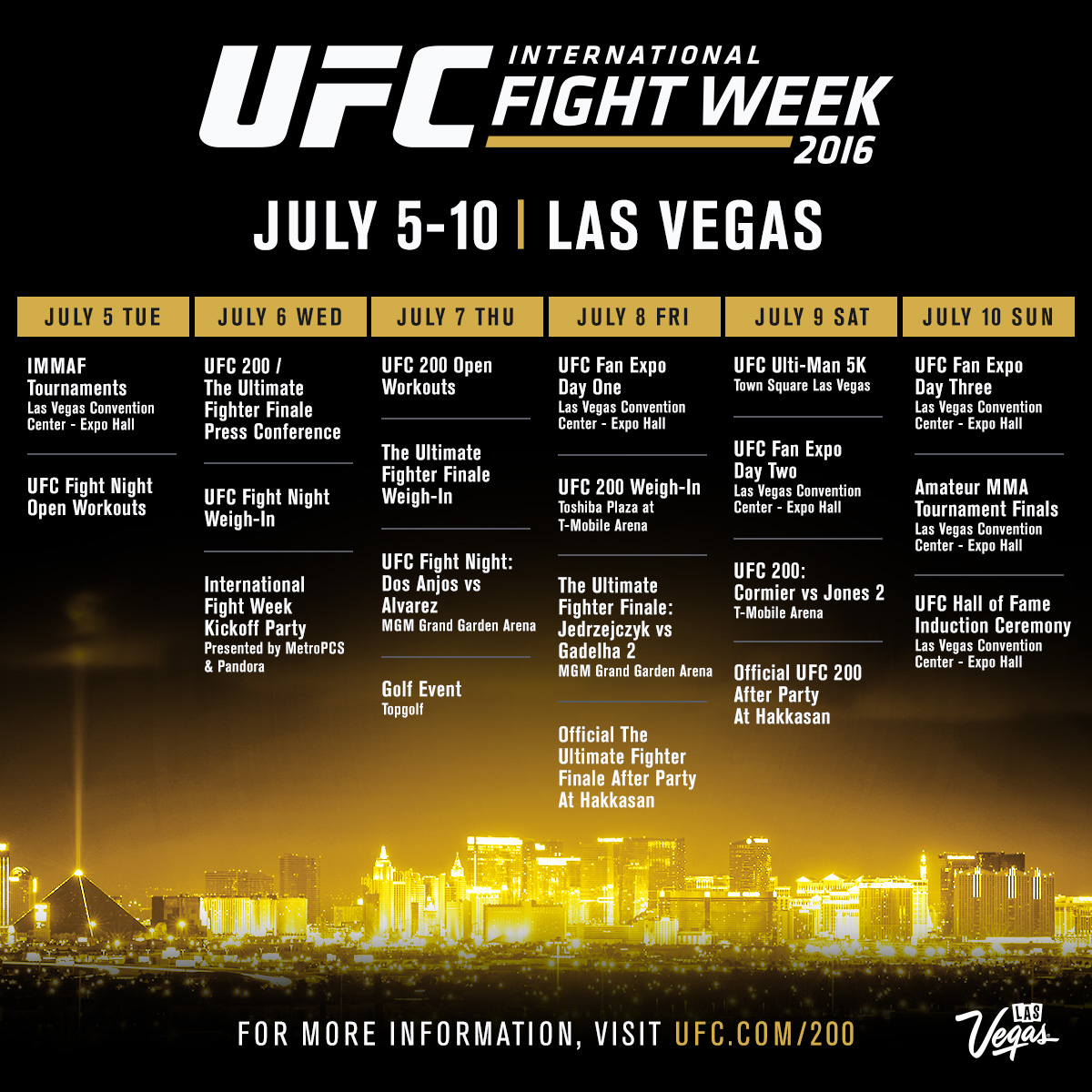 With three consecutive events and more than 30 bouts scheduled to take place, it’s easy to understand how a collection of the lesser known talents competing during UFC International Fight Week could slip into the background and not receive the attention they deserve.

Five championship bouts and the return of Brock Lesnar tend to do that.

But amidst the sea of big names and marquee fights set to take place in Las Vegas stands a quartet of up-and-coming fighters looking to make a name for themselves alongside the likes of Rafael dos Anjos, Joanna Jedrzejczyk, Daniel Cormier and Jon Jones between Thursday evening and Sunday morning.

Allow us to introduce them to you.

This is the International Fight Week edition of On The Rise.

Thursday night, when the former Titan FC welterweight champion steps into the Octagon for his promotional debut against Alan Jouban, Bruce Buffer needs to make sure to announce Muhammad’s nickname off the top, rather than spliced between his first and last names.

When the man in the tailored suit introduces the unbeaten newcomer, he should bellow “Remember the Name” Belal Muhammad because it’s sound advice for fight fans.
RELATED CONTENT: Belal Muhammad fighter bio | Debut against Alan Jouban

Fresh off a fourth-round stoppage win over TUF 22 alum and durable veteran Steve Carl, Muhammad was tabbed to replace Nordine Taleb opposite Alan Jouban on this week’s opening event. The matchup represents an opportunity for the undefeated welterweight to make an immediate splash in his new surroundings, as Jouban is a dangerous finisher and highly regarded emerging talent in the 170-pound ranks.

More of a grinder than a finisher, Muhammad has faced good competition on his way to reaching the UFC and has the potential to stick around at this level for a long time. And if he beats Jouban in his debut, don’t be surprised if you hear people talking up the talented neophyte once the dust from this week of action clears. 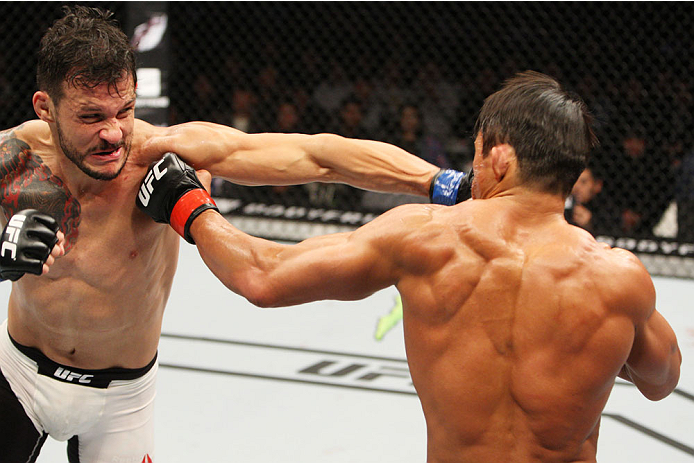 Just as Muhammad rolls into his first UFC appearance with a chance to make an instant impact, Brazil’s Mina has an opportunity to attract a little more attention on Thursday night as well as he puts his unbeaten record on the line against hometown favorite Mike Pyle.

The 34-year-old Mina, who fights out of Hong Kong, has picked up victories over Shinsho Anzai and Yoshihiro Akiyama in his first two trips into the Octagon, but because of how infrequently he fights and the depth in the welterweight division, he’s barely a blip on the radar. That can change with a third straight UFC win, especially if he can deliver a stoppage against the veteran Pyle, who is coming off a Fight of the Night effort in his third-round stoppage win over Sean Spencer back in February.

While there are always a lot of names to consider in the 170-pound weight division, it would be hard to ignore a fighter on a three-fight winning streak with a perfect 13-0 record for too much longer. 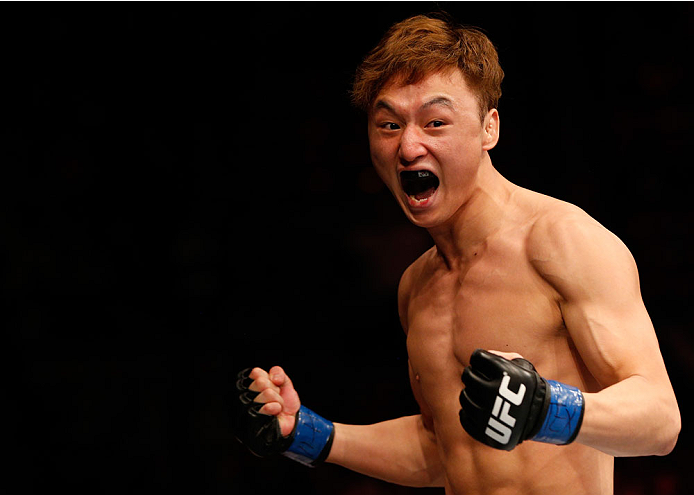 If you’re not geeked about the return of “The Korean Superboy,” you’re doing it wrong.

Entering his Friday night pairing with veteran Thiago Tavares, the 25-year-old is riding a 12-fight winning streak that includes back-to-back victories in the UFC. Those contests lasted a combined one minute and 51 seconds, as Choi needed just 18 seconds to dispatch Juan Puig in his debut and just over 90 seconds to do the same to Sam Sicilia in his sophomore outing.

Tavares has been in the UFC for nine years and is a perfect litmus test for the featherweight prospect, as he’s slick on the ground and game on the feet, boasting a serious edge in the experience department heading into this one.

Should Choi keep his winning streak intact and pick up another quick finish, it will be difficult to deny him a shot at someone a little higher up the featherweight ladder next time out.
RELATED CONTENT: Fighter bios - Doo Ho Choi | Matheus Nicolau | Choi's matchup with Thiago Tavares | Nicolau vs No. 6 John Moraga

While Muhammad and Mina have the chance to establish themselves as fighters to track in the welterweight division with wins on Thursday night, Nova Uniao product Nicolau could announce himself as a legitimate contender in the flyweight ranks with a win over former title challenger John Moraga at Friday’s Ultimate Fighter Finale event.

Nicolau picked up a third-round submission win over Bruno Rodrigues in his promotional debut back in March, scoring the finish with the rarely seen Japanese necktie. The fact that a 23-year-old from one of the best teams in the world is catching dudes with unique submissions should be enough to have you interested in Nicolau going forward, but just in case it isn’t, he gets the opportunity to show and prove against an established threat in his second UFC appearance.

Moraga is 5-3 in the UFC, but his losses have come to a triumvirate of top talents in the flyweight division – champion Demetrious Johnson and two men that have each faced “Mighty Mouse” for the belt on two occasions, Joseph Benavidez and John Dodson, who has actually bested Moraga twice.

If Nicolau can add his name to that exclusive, illustrious list, he should get added to the Top 15 in the 125-pound division when the new rankings come out on Monday morning as well. 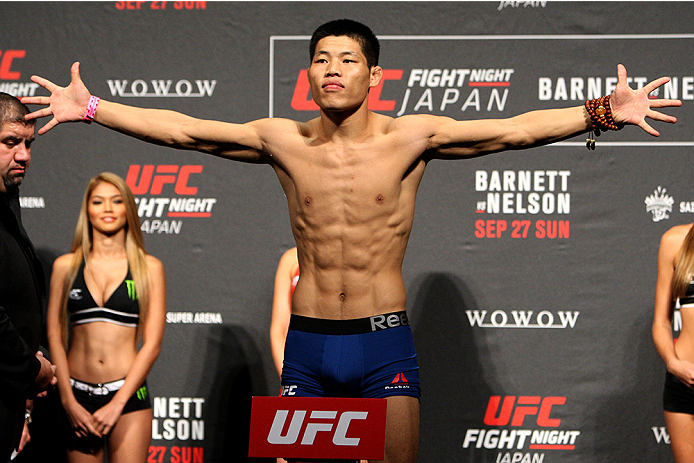 “The Leech” has gone 2-2 in his first four Octagon appearances, but has always shown the raw tools to make observers speculate about how good he will be as he continues to gain experience and benefits from logging time against UFC talent.

The 28-year-old China Top Team representative is big for the division and is at his best when he’s using that size to work in the clinch and force opponents to carry his weight, though his hands are improving, as he showed with his first-round knockout win over former TUF finalist Dhiego Lima last spring in the Philippines.

Squaring off against Australian veteran Anton Zafir on Friday night, this is a chance for Jingliang to showcase the improvements he’s made since losing to Keita Nakamura last September and take another step forward in his development.