In addition to the two championship fights that will close out the show, the UFC’s return to United Center in Chicago this weekend also features a pair of crucial matchups in the bantamweight division, potential title eliminators in the strawweight and bantamweight ranks, a heavyweight slugfest, and critical bouts between tenured talents at both strawweight and featherweight.

Oh yeah — and Donald “Cowboy” Cerrone is making a hasty return to the Octagon just five weeks after picking apart Al Iaquinta to take on the returning Tony Ferguson in what is both the early favorite to take Fight of the Night honors and one of those special matchups that carries advance Fight of the Year kind of buzz.

Like I said off the top — UFC 238 is loaded, and in addition to all the goodness mentioned above, there are also three emerging hopefuls set to step into the cage and do their thing this weekend in Chicago.

A perfect 3-0 in the UFC and riding a nine-fight unbeaten streak, Yan has established herself as one to watch in the strawweight division and gets a step up in competition in her first stateside appearance.

Originally scheduled to meet local favorite Felice Herrig, the 29-year-old will instead square off with TUF alum Angela Hill, who quickly stepped up when Herrig was forced out of the contest due to injury. The 31-year-old Hill has gone 3-4 in her seven fights since returning to the UFC, but is coming off her best performance to date — a unanimous decision win over Jodie Esquibel at the end of April.

The hallmark of Yan’s game is keeping a high pace and throwing combinations and it has served her well to this point. Last time out against Syuri Kondo, the emerging Chinese prospect spent the full 15 minutes rattling off two-, three-, and four-strike combinations that prevented the Japanese veteran from building any momentum and allowed Yan to sweep the scorecards for her third straight UFC win.

Strawweight has never been more flush with talent, but also primed for change in the upper reaches, as the recent title change and emergence of several new names has created a highly competitive landscape in the 115-pound weight class. Yan is very much a part of that new wave of talent looking to make her move into the rankings and closer to contention, and a win over an established veteran like Hill would go a long way to helping her accomplish that task. 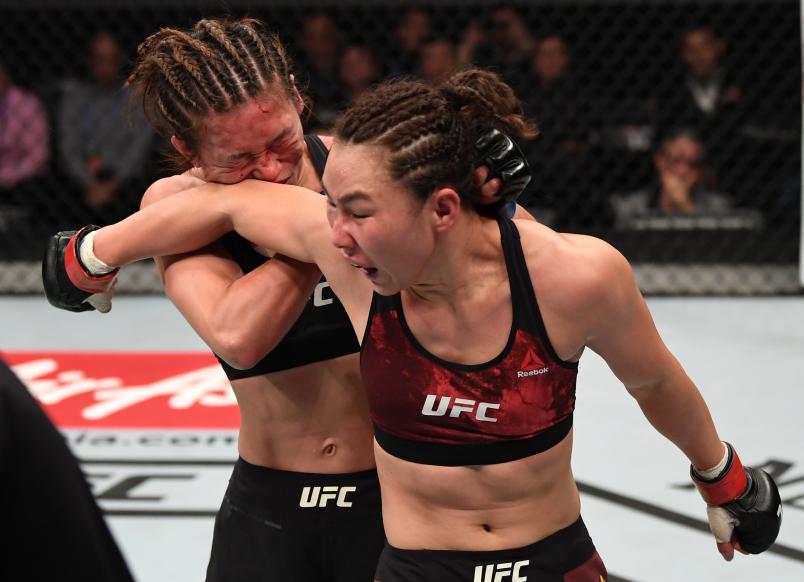 Yan Xiaonan of China lands a spinning back elbow against Syuri Kondo of Japan in their women's strawweight bout during the UFC Fight Night event inside Cadillac Arena on November 24, 2018 in Beijing, China. (Photo by Jeff Bottari/Zuffa LLC)

Yan Xiaonan of China lands a spinning back elbow against Syuri Kondo of Japan in their women's strawweight bout during the UFC Fight Night event inside Cadillac Arena on November 24, 2018 in Beijing, China. (Photo by Jeff Bottari/Zuffa LLC)
Bevon Lewis

After a pair of successful appearances on the Contender Series with a victory at LFA 38 sandwiched in between, Lewis scored a UFC contract and was quickly thrown into the deep end of the middleweight talent pool in a matchup against divisional fixture Uriah Hall at UFC 238.

It didn’t go well for the emerging talent fighting out of Jackson-Wink MMA. A little over 90 seconds into the opening round of his UFC career, Lewis suffered his first loss, getting felled and finished by the former TUF finalist.

This weekend, the talented 28-year-old prospect makes his sophomore appearance in the Octagon opposite Darren Stewart, a durable Brit who has gone 2-4 with one no contest in seven previous UFC appearances.

There is a lot to like about Lewis, who is often compared to his teammate Jon Jones because of his exceptional reach, overall physicality and comparable fighting style. Expecting him to come out of the gates and replicate Jones’ rapid ascent would be foolish, and his bout against Hall showed that the middleweight prospect has some holes in his game that need patching, but the raw materials are there and with a little more seasoning and experience, Lewis could develop into someone of note in the 185-pound ranks.

Saturday’s matchup with Stewart is a perfect measuring stick fight for him at this point in his development, as “The Dentist” has proven powerful and is as tenacious as they come, but has landed on the wrong side of the results in similar pairings earlier in his career.

If Lewis can show some improvements and get his first UFC victory, it will be a step in the right direction for the highly touted prospect and a strong building block as he heads into the second half of 2019.

Popov is the latest in a string of talents representing Tiger Muay Thai to make their way into the Octagon, joining fellow UFC 238 competitor Petr Yan and recent debutants Arman Tsarukyan and Rafael Fiziev in representing the renowned Phuket fight team on the biggest stage in the sport.

The 35-year-old arrives in the UFC on a long winning streak, and rather than getting a low-profile introduction into the bantamweight ranks, Popov will instead get an immediate opportunity to establish himself as a contender when he takes on divisional mainstay Eddie Wineland on Saturday.

A fixture in the 135-pound ranks since its introduction, Wineland has fought the best of the best in the division, amassing a 5-7 record in a dozen Octagon appearances while consistently engaging in close, competitive, entertaining fights.

Graduating to the UFC is a major step for Popov, but there are no layups at this level and if he wants to prove he belongs, this is the kind of matchup he needs to win. He has steamrolled the competition at the regional level over the last several years and now it’s time to find out if he’s a legitimate threat.