Because UFC 226 is so stacked, we’re going to do a little something different for this installment of On the Rise.

We’re going to call it the “Last Chance” edition because each of the three emerging talents below has made a previous appearance in this space, but just in case you weren’t paying attention or haven’t already been convinced that you need to check them out and keep tabs on them going forward.

I tried to tell you about them before and because I like you, I’m going to remind you, but after this, it’s all on you.

Here’s a look at the returning upstarts who are ready to shine on Saturday night at T-Mobile Arena.

This is On the Rise: UFC 226 Last Call Edition.

The 34-year-old acclaimed kickboxer made his promotional debut last September, striding into the cage in Saitama, Japan, where he looked very much like a dangerous new addition to the light heavyweight division by knocking out Henrique da Silva in the first round.

After being forced out of his sophomore appearance in December due to a knee injury, Saki is healthy and ready to run it back with the man he was initially supposed to face at UFC 219, Khalil Rountree Jr., in what should be a symphony of 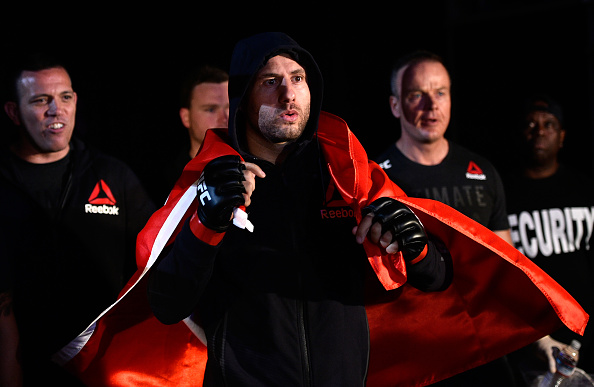 savagery for as long as it lasts.

While there are still questions about some aspects of Saki’s game that need to be answered, there is no denying that “The Rebel” is one of the most dangerous strikers in the division and a potential dark horse contender in the wide open 205-pound weight class as the second half of 2018 gets underway. Rountree is a solid test for him in his second journey into the Octagon – a former top prospect who has impressed at times and underwhelmed in others, but who has the kind of toughness and tenacity to potentially go shot-for-shot with the former K-1 and Glory standout.

If Saki can collect another impressive finish, he could find himself in the fast lane to contention in the light heavyweight ranks. He’s an established name with an incredible highlight reel and if he adds to it here against Rountree, don’t be surprised if he cracks the Top 15 and shares the cage with a more established and accomplished opponent next time out.

Following a second straight head kick knockout win under the LFA banner in early January, Millender inked a multi-fight deal with the UFC and made his debut a couple weeks later against former welterweight title challenger Thiago Alves.

Showing absolutely no nerves and incredible poise while competing under the bright lights for the first time in his career, the 30-year-old Millender strolled into the cage and finished Alves with a picture-perfect knee to the chin. Now riding a seven-fight winning streak, the Anaheim-based contender squares off with fellow Californian Max Griffin on Saturday, looking to make it two-in-a-row in the UFC.

The six-foot-two Millender does an excellent job of using his length to his advantage in the cage, working behind a quick, stinging jab and firing off kicks to all levels that keep his opponents from establishing a rhythm and getting inside. If he can do the same against Griffin and leave Las Vegas with his winning streak intact, the five-year pro who currently has 15 career victories could find himself knocking on the door of the Top 15.

John Crouch has long talked about the group of fighters in the lighter weight classes that he has assembled at the MMA Lab in Arizona that will steal your lunch money. Te Edwards, who showed fight fans what he’s capable of by earning a UFC contract with a 28-second knockout on Dana White’s Tuesday Night Contender Series last week, is one of them and so too is Klose.

The 30-year-old Michigan native debuted in the UFC with a win over Devin Powell before halting the rapid rise of British prospect Marc Diakiese this time last year. Five months later, it was Klose who tasted defeat for the first time as he returned to his home state and landed on the wrong side of a unanimous decision verdict against surging Swedish striker David Teymur.

Back for the first time since and bent on getting back into the win column, Klose gets his chance on Saturday in a clash with a another On the Rise alum from an outstanding camp, Jackson-Wink product Lando Vannata.

“Groovy” Lando has been a bonus machine since arriving in the UFC, taking home a little extra bank from each of his four Octagon appearances. But the entertaining 26-year-old is just 1-2-1 through that initial quartet of contests and if Klose can shut down his dynamic offense and hand him another defeat, he’ll get right back into the chase in the always competitive 155-pound weight class.