Here we are at the final installment of On the Rise for 2017 and I have to say, it’s been a pretty great year.

Over the course of 12 months and 38 events, we’ve put a light on more than a few noteworthy newcomers, promising prospects and exciting emerging contenders, including breakout performers like Volkan Oezdemir, Darren Till, Paulo Costa and Cynthia Calvillo, who looks for her fourth UFC victory of 2017 this weekend when she takes on former strawweight champ Carla Esparza.

Last year’s final edition of OTR featured Ray Borg, who used a victory over Louis Smolka at UFC 207 to propel himself into the biggest year of his career, culminating in a title bout with Demetrious Johnson.

Will someone from this year’s last offering duplicate the feat in 2018?

Here are the candidates.

After having his debut postponed at the 11th hour in early November, Poland’s Oleksiejczuk jumped at the opportunity to replace the injured Gohkan Saki and face former TUF finalist (and OTR alum) Khalil Rountree Jr. in this weekend’s featured preliminary card bout on FS1.

A training partner of fellow light heavyweight Jan Blachowicz, who notched a nice victory earlier in the month against Jared Cannonier, Oleksiejczuk is definitely someone to keep an eye on in a division that is always in need of fresh, young talent. The 22-year-old has won nine straight heading into this one, with only one of those bouts going the distance.

Debuting in the UFC is always a daunting task and Rountree is no easy out, having collected back-to-back first-round stoppage victories to finally find his footing in the division, but if Oleksiejczuk can halt the Syndicate MMA product’s run of success and impress in the process, he’ll put himself in a good position to make some waves in the wide open light heavyweight division next year.

A member of the cast on the fourth season of The Ultimate Fighter: Brazil, Nicolau made a quick and impressive impression in the UFC flyweight division, winning his debut with a rare Japanese necktie finish before following that up with a split decision victory over former title challenger John Moraga.

Returning after serving a one-year suspension, the 24-year-old from Belo Horizonte hopes to pick up right where he left off 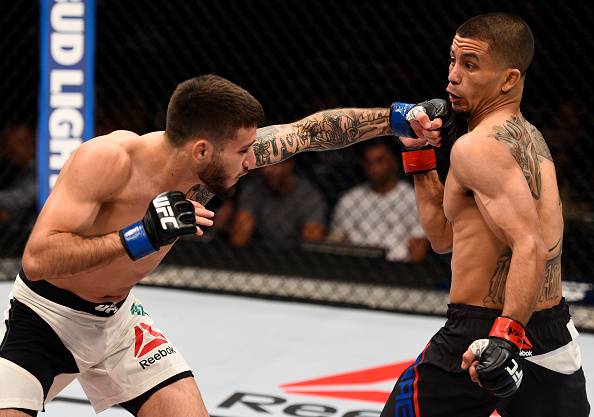 when he steps into the Octagon opposite Louis Smolka. While the win over Moraga remains a strong indication of the skills Nicolau possesses, this UFC 219 assignment with the tough Hawaiian is a perfect litmus test for the Brazilian at this time, as Smolka is a tough and talented competitor in dire need of a win, having dropped three straight heading into this one.

Should Nicolau come back and push his overall winning streak to six, he will surely find himself in the Top 15 once the rankings update for the first time in 2018 and return to being one of the most intriguing emerging threats in the 125-pound weight class.

If you’re looking for a dark horse candidate to make a run at the Top 10 in the middleweight division next year, look no further than Italy’s Vettori, who makes his fourth appearance in the Octagon at UFC 219 in a bout with Dagestani veteran Omari Akhmedov.

Five straight victories on the regional circuit – including wins over proven talents Jack Mason and Igor Araujo – earned the 24-year-old a promotion to the big leagues and he has impressed through his first three appearances, picking up wins over Alberto Uda and Vitor Miranda while dropping a decision to surging submission ace Antonio Carlos Junior. Now based in Orange County and training under Master Rafael Cordeiro at Kings MMA, it’s easy to envision Vettori taking a big step forward as he continues to gain experience and sharpen his skills alongside a collection of established talents and proven coaches.

Coming off his victory over Miranda in June, welcoming Akhmedov back to the middleweight division is another solid test for “The Italian Dream.” Vettori has exhibited obvious upside and raw potential thus far, and if there comes a time when he puts it all together, watch out.