The final month of the year kicks off with not one, but two fight cards this week, combining to deliver a ton of exciting action highlighted by a pair of championship bouts for your viewing enjoyment.

The second of this week’s offerings is the first to get the OTR treatment as the lineup for the UFC’s debut at Little Caesars Arena in Detroit is locked, loaded and laced with emerging talents you’re going to want to keep an eye on going forward.

Here’s a look at three such fighters poised to throw down in the Motor City on Saturday.

The 27-year-old light heavyweight garnered a ton of attention in early June when his knockout win over Jordan Powell went viral. Less than a month later, Reyes was debuting in the Octagon and while his sensational sendoff of Powell was going to be hard to top, “The Devastator” came close.

Reyes needed just 29 seconds to send Joachim Christensen crashing to the floor in a heap under a torrent of punches. Not only did the rapid victory extend his winning streak to seven, but it also put the unbeaten upstart on the radar as a dangerous new name to watch in the 205-pound weight division.

After dispatching Christensen with the quickness in June, Reyes returns this weekend to face fellow neophyte Jeremy Kimball, who rebounded from a loss in his short-notice debut to earn a Performance of the Night bonus in his sophomore stoppage win over Josh Stansbury on the same fight card. With their timelines in sync and their careers on a similar trajectory, pairing the two aspiring light heavyweights was an easy decision.

While a spot on the list of contenders is still a couple victories away, a win for Reyes here could further expedite his rise up the rankings. A two-time all-conference defensive back at Stony Brook University, he has the size and athleticism to potentially be a force in the cage and if he can up his winning streak to eight, Reyes should get a good, long look against some established competition in early 2018.

After agreeing to face Marcin Tybura on short notice at UFC 208 only to have the bout scratched due to medical issues on the eve of the fight, “Big Pretty” finally made his Octagon debut in July, venturing to Glasgow to collect a unanimous decision win over James Mulheron.

Now the 30-year-old American Kickboxing Academy representative looks to make it two straight in the UFC as he takes on Allen Crowder.

Like Reyes, Willis played college football before transitioning to mixed martial arts, manning the defensive line at San Jose State University. A big man (even for heavyweight) with surprising mobility and quickness, the 5-1 sophomore showed flashes of potential in his win over Mulheron and has the potential to make great strides between appearances given that he’s getting training reps alongside the likes of light heavyweight champ Daniel Cormier, Luke Rockhold and former heavyweight kingpin Cain Velasquez in San Jose.

The bottom half of the heavyweight division is in a perpetual state of flux and a couple strong showings is all it takes to climb into the Top 15 and earn a chance to make a significant impact. Willis got started down that path with his victory in Glasgow and if he can follow it up with a second win here, he could be in line for a promotion in the not too distant future. 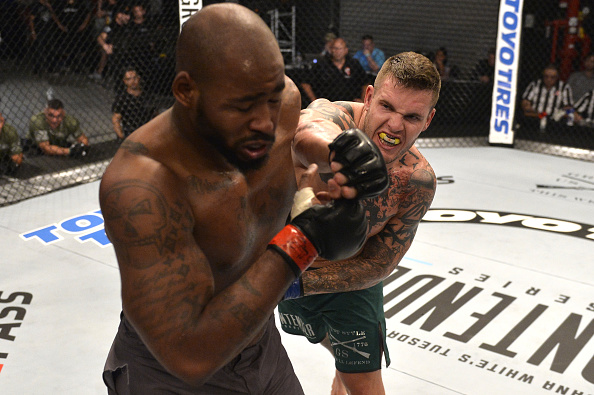 Crowder ran his winning streak to four with a third-round technical knockout victory over highly touted prospect Dontale Mayes on the eighth installment of the Dana White Tuesday Night Contender Series, earning the chance to compete in the Octagon.

A pro since 2014, the North Carolina native was relentless in his bout with Mayes, weathering a couple rocky patches to eventually take down, mount and pound out the victory to pick up one of the three contracts handed out on the final show of the season. Boasting an 8-2 record overall with one of those setbacks coming against surging heavyweight contender Curtis Blaydes, Crowder is the more seasoned and experienced fighter in his matchup with Willis and should use that to his advantage.

There is nothing in particular that stands out about Crowder’s game, but I don’t say that as a slight; he’s a high-motor grinder that is going to take his lumps and keep coming forward, never letting off the gas. It has carried him to the biggest stage in the sport and could very well carry him into the Top 15 in the next year or two as well.