Each of individual fights in the triumvirate of title bouts that will close out this weekend’s fight card at Madison Square Garden could stand alone as the headline attraction of a Pay-Per-View and the action and intrigue those three contests alone produce should be enough to turn this event into the biggest show of 2017.

Now here’s the cherry on top of the sundae of fighting awesomeness headed your way on Saturday: the rest of the card is deep and exciting, featuring a totally awesome mix of contenders and hopefuls, veterans and very talented neophytes looking to use the attention cast upon this event as a chance to introduce themselves to a wider audience and lay the foundation for something bigger and better next year.

Here’s a look at three of those relative newcomers angling to make an impression this weekend. 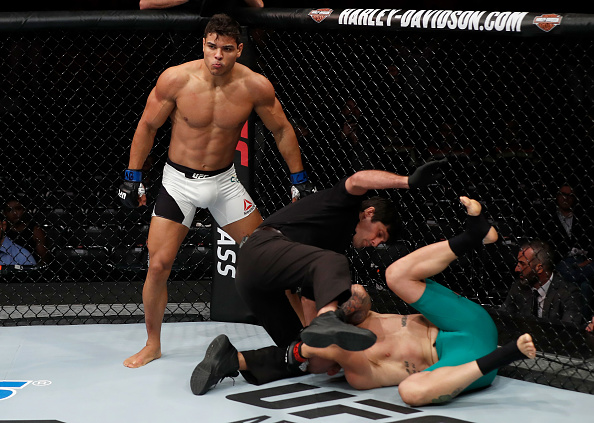 Built like an action figure and brandishing the kind of fighting style you’d deploy when you’re first figuring out how to play the latest EA Sports UFC game (read: non-stop aggression), the 26-year-old Brazilian has collected a pair of stoppage wins in his first two Octagon appearances.

Now Borrachinha gets a chance to graduate from being a fun, promising prospect to a dangerous dark horse contender with a main card assignment against former welterweight champion Johny Hendricks. While “Bigg Rigg” has struggled both on the scale and in the cage of late, he’s still a proven, tested veteran and the kind of fighter capable of halting the unbeaten Borrachinha’s rapid ascension up the 185-pound ranks.

Stationed in the opening slot on Saturday’s PPV main card, this is a prime opportunity for the Belo Horizonte native to really open some eyes and establish himself as one of the top emerging talents in the division.

With the middleweight belt up for grabs in the main event and plenty of talk about the future of the weight class sure to bubble up throughout the week, another blistering performance against Hendricks will ensure that when the conversation shifts to the guys to watch out for a couple years down the road, Borrachinha’s name will be brought up.

The 23-year-old from Moldova has quickly earned himself a place on the list of fighters who you should be tuning in to see every time they step into the cage. In case you’re curious, Joe Lauzon and Jim Miller are co-captains of the squad given their individual and shared histories.

Each of Cutelaba’s four UFC appearances has been wildly entertaining and while he’s toggled between coming out on the wrong side of the results and emerging with his hand raised, in every second of every fight – win or lose – he looks like he’s having fun and everyone watching is too.

Fresh off a 22-second victory over Henrique da Silva in June that is somehow only his third-fastest finish, the powerhouse who usually paints himself green for the ceremonial weigh-ins welcomes Polish newcomer Michal Oleksiejczuk to the UFC 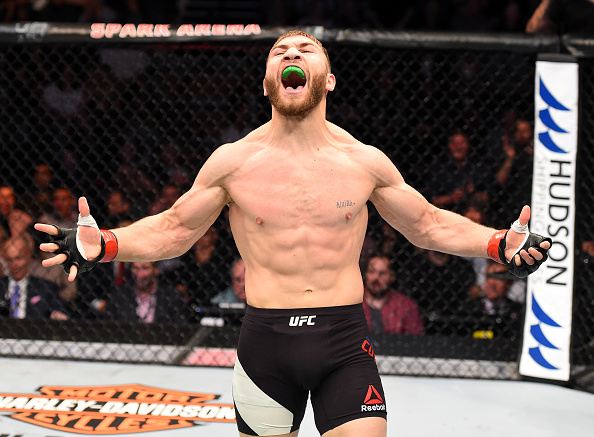 this weekend. A fellow youngster with serious power and a string of sudden finishes on his resume, Oleksiejczuk profiles as the kind of fighter who will meet Cutelaba in the center of the cage as they tuck their chins and swing for the fences until one of them falls down.

In just four appearances, those have quickly become the kind of performances Cutelaba is known for and if you can’t get excited for an emerging light heavyweight who really likes chucking knuckles, we can’t be friends.

Sorry. A man’s gotta have a code.

The night in New York City kicks off with a battle of bantamweight upstarts as the 22-year-old Ramos looks to extend his winning streak to three by handing Aiemann Zahabi the first loss of his pro career.

After impressing UFC President Dana White and company when they were up in Maine filming an episode of Lookin’ for a Fight, Ramos debuted in the Octagon in February and quickly established himself as someone to keep tabs on by dominating Michinori Tanaka through the first two rounds of his promotional debut before holding on down the stretch to get the victory.

Saturday’s opener will be a stern test for Ramos as the 29-year-old Zahabi is polished, technical and far savvier than most UFC prospects with a 7-0 record. Should the talented young Brazilian get by the French-Canadian upstart, he’ll add his name to the growing list of fresh faces climbing the bantamweight ranks and set himself up for a showdown with a more seasoned opponent next time out.