On a fight card like UFC 213, there are bound to be competitors and contests that live under the radar.

After all, the July 8 Pay-Per-View boasts one of the most stacked main card lineups of the year, boasting a pair of dynamic championship fights and former titleholders taking on established veterans in each of the three remaining main card contests. From start to finish, it should be electric inside T-Mobile Arena in Las Vegas.

But before the champions, challengers and marquee names make their way into the Octagon, a host of emerging talents with designs on showing out on the big stage will step into the UFC cage and do their thing.

Here are three to keep an eye on both on July 8 and going forward.

Given the amount of hype and attention Francis Ngannou has commanded since entering the UFC, it’s surprising that the guy who gave him his toughest fight to date hasn’t gotten more love.

Blaydes is a former NJCAA National Champion wrestler and has shown the ability to use that collegiate pedigree to dictate the terms of engagement inside the cage. But the 26-year-old isn’t content to just maintain position and grind out minutes – he likes to bomb away with ground-and-pound and as he continues to improve, Blaydes could be dangerous. 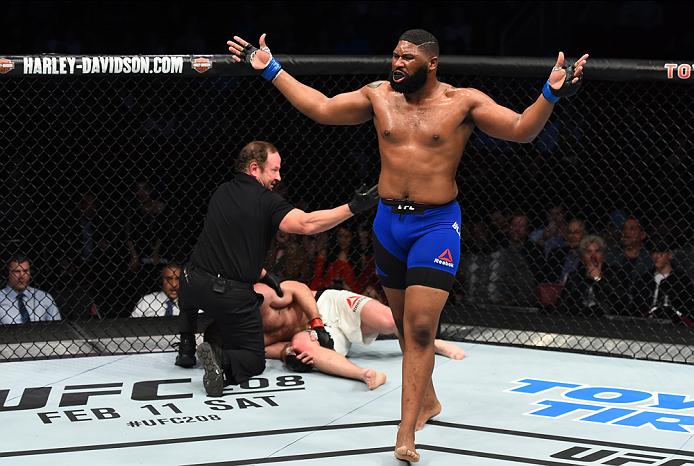 The bearded big man gets a step up in competition this weekend, lining up across the cage from Daniel Omielanczuk. The Polish veteran has eight UFC appearances under his belt and more than three times as many professional fights as Blaydes heading into this one, giving the youngster a chance to test himself against an experienced foe for the first time.

If he can collect a win on Saturday night, Blaydes should break into the Top 15 as the second half of the year gets underway.
Inside the matchups: Meerschaert vs Thiago Santos | Muhammad vs Jordan Mein | Blaydes vs Daniel Omielanczuk

After arriving in the UFC as a short notice replacement with an unbeaten record and a solid reputation from the regional circuit, Muhammad validated his advanced billing, even if the results haven’t been as consistently favorable as he would surely like.

Muhammad has split his first four appearances, but he’s shown plenty of heart and tenacity along the way, pairing with Alan Jouban to earn Fight of the Night honors in his debut loss before impressing in victories over Augusto Mendes and Randy Brown. Now having wrapped up his freshman year on the UFC roster, Muhammad has a chance to kick off his sophomore season in a Fight of the Night contender against Canadian Jordan Mein.

Welterweight is crazy deep and full of tough outs, but the 28-year-old Chicagoan has already proven he’s one of those tough outs, and he has the skills to become a permanent fixture in the talented 170-pound depths. This should be a wildly entertaining scrap and one that stands out from the crowd by the time the dust settles at T-Mobile. 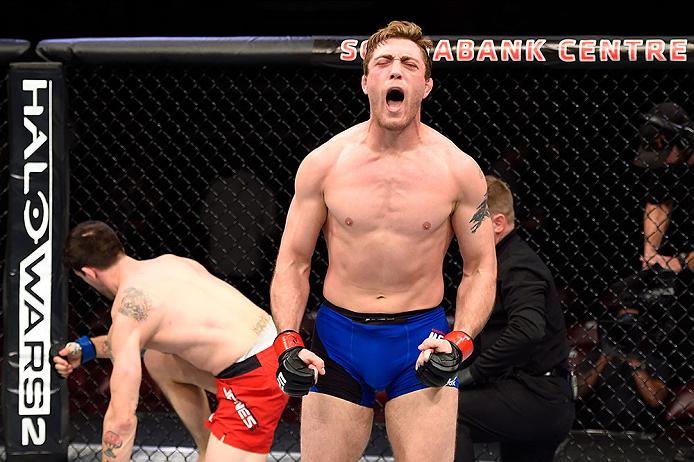 “GM3” has wasted little time making an impression on UFC fans and the middleweight division. Through his first two Octagon appearances, the Roufusport product has picked up a pair of first-round submission wins, spending just a shade under six minutes in the cage while tapping out Joe Gigliotti and Ryan Janes.

At UFC 213, Meerschaert gets a chance to graduate from being an entertaining newcomer to a ranked fighter in the 185-pound division when he takes on Brazilian striker Thiago Santos in the July 8 curtain-jerker.

“Marreta” has a ton of power and was a fixture in the rankings prior to hitting a two-fight skid late last year. Meerschaert had already handled his business against Janes when Santos got back in the win column with a stoppage win over Jack Marshman in Nova Scotia, and now their paths collide in Las Vegas.

If the ultra-confident Wisconsin native can run his winning streak to eight and pick up his third straight victory in the UFC, you best believe he’ll have something to say about his place in the division and plans for the future when he gets on the microphone after the fight.