The middle event in the UFC’s February trio of shows takes place this weekend at Barclays Center in Brooklyn, New York, with Holly Holm meeting Germaine de Randamie in the main event to crown the inaugural UFC women’s featherweight champion.

In the co-main event, arguably the greatest fighter of all-time, Anderson “The Spider” Silva, returns to the Octagon in what should be an explosive matchup with Top 10-ranked upstart Derek Brunson.

But before the final two pairings can make their way into the UFC cage, a host of championship hopefuls, emerging talents and familiar names will cross the threshold into the eight-sided proving ground and put it all on the line in a quest for victory and validation.

Here’s a look at three of the up and coming competitors you should pay close attention to this weekend.

In just his fourth UFC appearance, “Tha Killa Gorilla” has a chance to establish himself as legitimate threat in the light heavyweight division as he steps in opposite perennial contender and former title challenger Glover Teixeira in his Pay-Per-View debut.

After splitting a pair of appearances as a heavyweight to begin his UFC tenure, Cannonier dropped to the 205-pound weight class last time out and picked up an impressive unanimous decision win over Ion Cutelaba in an entertaining back-and-forth encounter that earned the duo Fight of the Night honors. It was a strong showing for the Anchorage, Alaska-based fighter, who scored a first-round knockout win over Cyril Asker to collect his first UFC victory, and it established Cannonier as an intriguing dark horse in the relatively shallow division.

A pro since 2011, the 32-year-old takes a major step up in competition by squaring off with the Brazilian veteran. Teixeira remains a dangerous threat, boasting crisp boxing, blistering power and a wealth of experience. Toppling the Danbury, Connecticut resident is a tall order that only the division’s elite have accomplished to date, but if Cannonier can join that exclusive group, he’ll put himself in the thick of the title chase to start 2017.
RELATED: Inside the matchups - Cannonier vs Teixeira | Brown vs Muhammad | Makhachev vs Lentz

All in all, “Rudeboy” had a pretty productive first year in the UFC after impressing UFC President Dana White when he and the “Lookin’ for a Fight” crew stopped in Atlantic City to take in Ring of Combat 53 at the end of 2015. 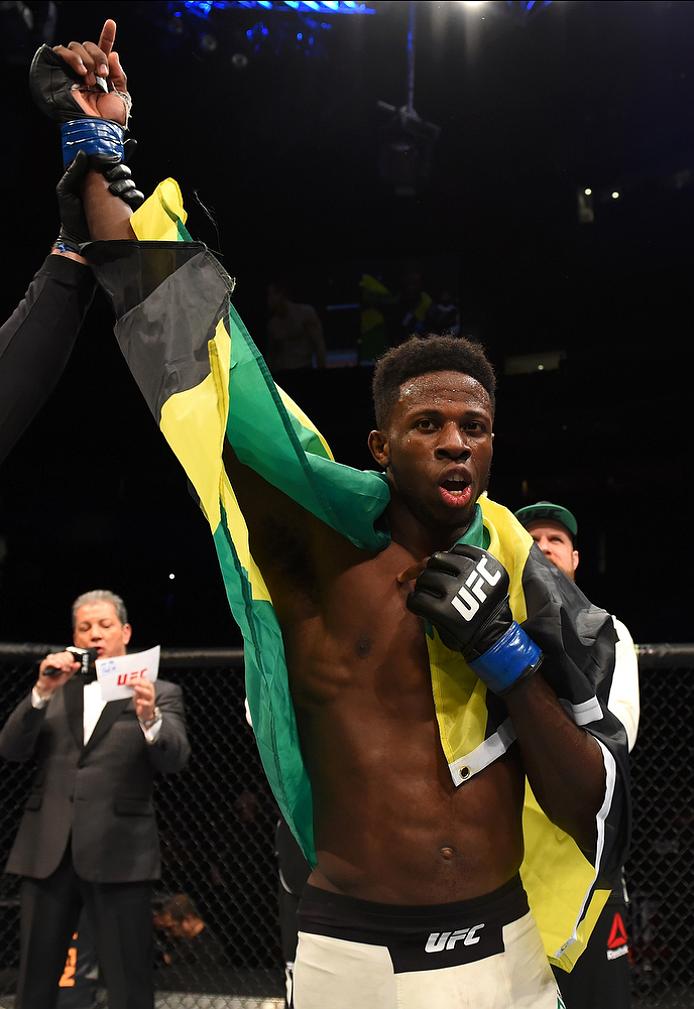 Following a hard-fought decision win over Matt Dwyer in his debut, Brown was tapped out by TUF alum Michael Graves in his sophomore appearance, but rebounded with back-to-back finishes of Erick Montano and Brian Camozzi to end the year on a high note. The 26-year-old Queens, New York product has tremendous size for the division and uses his reach well, both of which should only continue to serve him well going forward.

Originally scheduled to face George Sullivan on Saturday, Brown will instead meet Belal Muhammad in a clash of welterweight prospects that will serve as a quality litmus test for both fighters. Now that he’s found a comfort level in the UFC Octagon, don’t be surprised if Brown starts making some major strides and opens a few eyes during his sophomore campaign.

Heralded as “one to watch” in the lightweight division upon his arrival in mid-2015, Makhachev did not disappoint, collecting a second-round submission win in his promotional debut. He’s split a pair of appearances since, most recently returning from an 11-month hiatus to earn a unanimous decision win over Chris Wade in September to reclaim his prospect status.

Makhachev has the chance to make a serious impression at UFC 208 when he steps into the cage with Nik Lentz, the 32-year-old veteran who carries an 11-4-1 (1 NC) UFC record into the Octagon in search of his third straight victory. An outstanding grappler and criminally underrated competitor, Lentz is the type of tough out that has made a career of turning back hopefuls at this point in their progression, which means Makhachev will have his hands full on Saturday night.

An International Master of Sport in combat sambo, the 25-year-old Makhachev has the pedigree to hang with Lentz in the clinch and on the ground, where “The Carny” thrives, and if he’s able to halt the American Top Team product’s winning ways, the Abdulmanap Nurmagomedov pupil will move into position on the fringes of the Top 15 and set himself up for an even bigger fight next time out.