Returning to the Air Canada Centre for the first time in more than three years, UFC 206 may have lost its original main event – a championship clash between Daniel Cormier and Anthony Johnson – but this card has solid depth and should produce more than enough excitement to reduce the impact of having the light heavyweight title fight fall off the card.

In addition to boasting several of the top Canadian names currently on the roster – plus the returning Jordan Mein – this event should bring the UFC’s 2016 campaign in the Great White North to a close in exciting fashion.

Along with the national talent represented on the fight card, this weekend’s Pay-Per-View also features a trio of up and comers looking to make an impression as the year winds down.

The Jackson-Wink MMA Academy product made his UFC debut on short notice over the summer and, much to the surprise of pretty much everyone, he walked into the Octagon and pushed top contender Tony Ferguson to the limit, throwing down with “El Cucuy” in Sioux Falls, South Dakota.

While he ended up on the wrong side of the result, Vannata established himself as someone to keep an eye on after rocking the former Ultimate Fighter winner and showcasing his creative, free-flowing striking style, not to mention the sweet purple crushed velvet suit he rocked after the event.

Returning with the benefit of a full training camp, the 24-year-old takes on Canadian kickboxer John Makdessi in a bout more indicative of where he falls in the lightweight pecking order at this time. Stylistically, a fight with the Quebec-based striker should produce fireworks, giving fans another chance to see what makes “Groovy Lando” so much fun to watch.

Sporting an 11-0 record, the 23-year-old Brazilian gets the opportunity to make an instant splash in the strawweight division, squaring off with former title challenger Valerie Letourneau in her UFC debut.

A pro for the last three years, Perreira has cut her teeth on the Brazilian regional circuit, collecting six stoppages. Listed at 5-foot-1, the Fortaleza native will be giving up a considerable amount of size against the Canadian veteran, who competed at bantamweight earlier in her career and is six inches taller than her Brazilian counterpart.

While Letourneau dropped her last outing against Joanne Calderwood in Ottawa during the summer, the Montreal-raised, South Florida-based French-Canadian has significantly more experience than Perreira and her back is against the wall. Eager to avoid a three-fight losing streak, “Trouble” should be at her best, creating a huge opportunity for the UFC newcomer.

With the division currently undergoing realignment and new contenders trying to establish themselves in the pecking order, Perreira has a chance to slide right into the Top 10 with just a single victory. 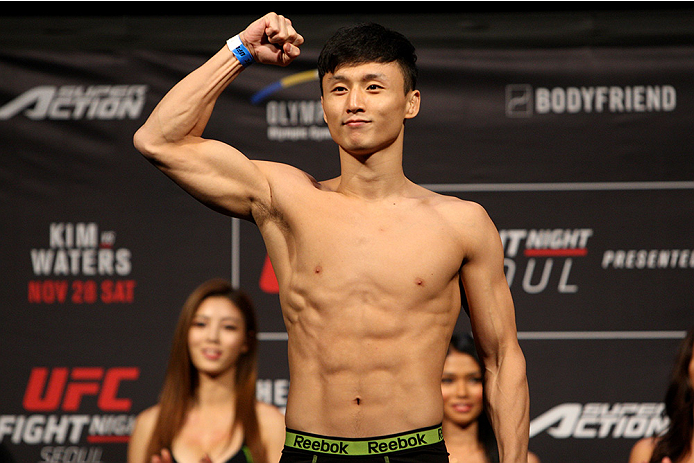 Three fights and three first-round stoppage wins have turned “The Korean Superboy” into one of the hottest prospects in the entire organization, and now the 25-year-old featherweight gets a chance to graduate from emerging talent to contender in a matchup with Cub Swanson.
DOOHO CHOI VS CUB SWANSON FEATURED ON INSIDE THE OCTAGON

It’s the opportunity Choi was lobbying for following his win over Thiago Tavares in the summer, petitioning to face the winner of the August pairing between Swanson and Japanese veteran Tatsuya Kawajiri. When “Killer Cub” came away with the win, the UFC lined him up opposite the power-punching South Korean rising star.

With the featherweight division getting a fresh start heading into 2017, this is an opportunity for Choi to pick up the biggest win of his career and position himself for a marquee matchup once business picks up again in the New Year.