With a card as deep and brimming with familiar names as UFC 205, you would think it might be hard to find a couple fighters who are “flying under the radar” as they prepare to step into the Octagon at Madison Square Garden on Saturday night, but that isn’t the case.

While the focus is locked on the main event, two more championship fights and the familiar names everyone has seen do battle inside the eight-sided proving ground in the past, these three athletes will be looking to use this weekend’s historic debut in New York City as their own personal coming out party.

Luque wasn’t originally scheduled to compete at UFC 205, but unlike Dante Hicks, the 24-year-old former Ultimate Fighter contestant was more than happy to called into work this weekend. 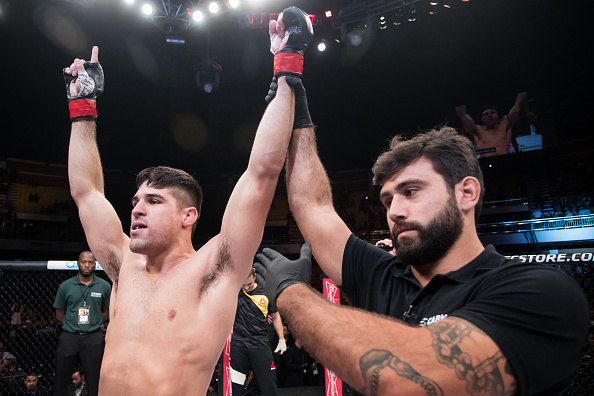 After stumbling out of the gates against fellow TUF 21 alum Michael Graves in his promotional debut, the Brazilian welterweight has rattled off three straight stoppage wins to establish himself as one to watch in the 170-pound ranks. Primarily known for his slick chokes and nasty squeeze, Luque showed he’s got some pop in his hands as well last time out, dropping Hector Urbina 60 seconds into their meeting in Brasilia back in September.

Though he could have eased into the final two months of 2016 reveling in his current hot streak, Luque instead jumped at the chance to fill in for Lyman Good this weekend on the biggest show of the year, eager to test himself against a fellow up and comer and see if he can run his winning streak to four before the year is out.
RELATED: Matchup - Luque vs Muhammad | Fighter bios - Luque | Muhammad | Chookagian

A lot of people chuckled and rolled their eyes when they heard Muhammad’s nickname for the first time, but then the promising 28-year-old steps into the cage, delivers the type of impressive showing he’s quickly becoming known for and suddenly it all clicks into place and those once dismissive fans do, in fact, “Remember the Name.”

Tabbed to debut on short notice against Alan Jouban in July, Muhammad came out on the wrong side of the result, but proved he deserves to be fighting alongside the best welterweights in the world, turning in a gutsy effort in defeat. Two months later, the Chicago-based upstart traveled to Hidalgo, Texas and picked up his first UFC victory, stopping Augusto “Dodger” Montano in the third round of another spirited affair.

Winning gold under the Titan FC banner by working his way through tough competition showed Muhammad was deserving of a call-up to the major leagues, and in his first two appearances in the Octagon, he’s not only proven he belongs, but shown that he has potential to climb the ranks in the shark-infested welterweight division.

Her last name might be hard to pronounce (though it’s no Jedrzejczyk), but it’s not hard to see that the unbeaten 27-

year-old New Jersey product is a legit prospect in the women’s bantamweight ranks.

After collecting seven consecutive victories competing primarily on the East Coast (with a couple trips to Hungary mixed in for good measure), Chookagian matriculated to the UFC in July and kept her winning streak intact with a unanimous decision win over durable veteran Lauren Murphy in Sioux Falls, South Dakota. Now, she’ll join teammate Frankie Edgar in fighting close to home when she takes on Liz Carmouche in the opening bout of this weekend’s monumental event at Madison Square Garden.

The victory over Murphy catapulted the “Blonde Fighter” (it’s her Instagram account handle and it stuck) into the rankings and a follow-up win over Carmouche could carry her to the fringes of contention in the suddenly percolating women’s bantamweight ranks.