Saturday night is a championship homecoming for heavyweight champion Stipe Miocic, the first professional athlete in more than 50 years to bring a title back to Cleveland, accomplishing twin dreams he often discussed with one perfectly placed punch back in May at UFC 198.

While this weekend’s UFC debut in “The Land” is capped by the city’s native son defending his title for the first time against Alistair Overeem and features a collection of seasoned veterans stepping into the Octagon, there are also three newcomers that are capable of making waves and stealing some of the spotlight once the action gets under way at “The Q” on Saturday.

Here is a look at the new talent to pay attention to this weekend.

A debut more than 18 months in the making will finally happen on Saturday night when former WWE champion CM Punk steps into the Octagon for the first time.

There has been tons of talk about whether Punk deserves the opportunity that is being afforded to him and that he’s taking up a spot on the UFC roster that should otherwise go to someone with more experience and not just a famous name from a previous career, but you have to hand it to the 37-year-old welterweight neophyte, as Punk has continued to chase this dream through myriad delays and injuries, and by all accounts he has put in the work in the gym in advance of his debut this weekend.

Notoriety and attention often lead people to have heightened expectations, but looking at Punk’s debut through that lens is misguided.

This isn’t about a former professional wrestler making an instant move into contention; as Punk said on the UFC 203 conference call last week, it’s about proving something to himself and showing others that you can chase your dreams.
RELATED: Embedded Ep. 1 | Watch List | Rogan previews Punk vs Gall | Latest episode of Evolution of Punk

Standing across the Octagon from Punk on Saturday night at the Quicken Loans Arena will be the 24-year-old Gall, who asked for the opportunity to face “The Straight Edge Superstar” when UFC President Dana White was in attendance at his pro debut and who earned the opportunity with a rapid submission win over Mike Jackson back in February.

Has the New Brunswick, New Jersey native taken the fast lane to the UFC? Absolutely, but anyone that begrudges him for that or refuses to recognize his potential is being blinded by their grievances with this matchup and Gall wisely recognizing the opportunity before him and making the most of it. 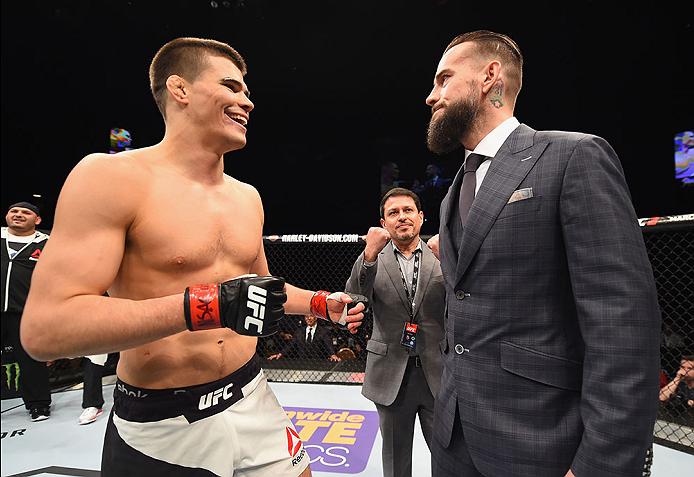 Gall’s not the first fighter to arrive in the Octagon with little experience, but he’s shown flashes of potential during his brief fighting career and draws rave reviews for his work ethic and upside from Dan and Jim Miller, two no-nonsense veterans that know what it takes to compete at the highest level of the sport.

His entry into the UFC may have come by unconventional means, but if Gall is victorious Saturday and goes on to establish himself as a legitimate prospect within the next year, how he got here stops being a point of contention and the discussion shifts to what he could do in the future.

Tabbed to replace Erik Koch opposite Drew Dober, Gonzalez makes his official UFC debut on a six-fight winning streak that includes a second-round technical knockout win in his return to action after being a cast member on Season 22 of The Ultimate Fighter.

A member of Team Faber on the show, the 26-year-old California native has yet to go the distance in 12 pro appearances, earning four knockouts and six submissions in his 10 victories, including a second-round submission win over former UFC competitor Christos Giagos, while failing to make it out of the first round in each of his two career setbacks.

Big for the division and boasting a considerable size advantage over Dober in this one, Gonzalez has the raw tools to collect a win and earn a place in the UFC lightweight ranks going forward. Just because he didn’t succeed during his time on The Ultimate Fighter doesn’t mean a bright future in the Octagon isn’t ahead of him.