Tucked beneath this weekend’s welterweight championship fight, and the collection of bouts featuring established contenders jockeying for position, rest three bouts featuring a trio of athletes trying to make their way into that group in the future.

While they aren’t established names now – or lost some momentum after a hot start a couple years ago in one instance – these are three fighters fans could be hearing a lot more from in the next year, provided all goes well in Atlanta.

Here’s a closer look at the three On The Rise fighters for UFC 201: Lawler vs. Woodley.

In a weight class where there isn’t an abundance of fresh, young talent climbing the ranks, how can fans not be excited and paying close attention to Krylov’s current run of success in the light heavyweight division?

After debuting at 205 pounds with a loss to Ovince Saint Preux, the 24-year-old Krylov has collected four straight stoppage wins, most recently forcing Francimar Barroso to tap to a rear naked choke at UFC Rotterdam in May, leaving him on the verge of breaking into the Top 10 in division.

This weekend, Krylov faces his most seasoned test since sharing the cage with OSP, stepping in against TUF 3 finalist Ed “Short Fuse” Herman in a bout that has the potential to take “The Miner” to the next level. Herman returned to the light heavyweight ranks with a second-round stoppage win over Tim Boetsch in Boston, and if Krylov can add his name to his running tally of foes he’s turned back, the young Ukrainian prospect should put himself in a position to face some of the more established, veteran names in the division in the second half of 2016.

If you’re looking for a young welterweight with limited experience, but a ton of upside to keep tabs on going forward, Graves would be a very good choice.

The American Top Team product impressed during Season 21 of The Ultimate Fighter and has earned a pair of victories since the show wrapped, collecting a unanimous decision win over Vicente Luque before tapping out Randy Brown close to his home base in South Florida back in April. A compact grappler with a strong top game, Graves is a work in progress, but so far, the progress has been steady. 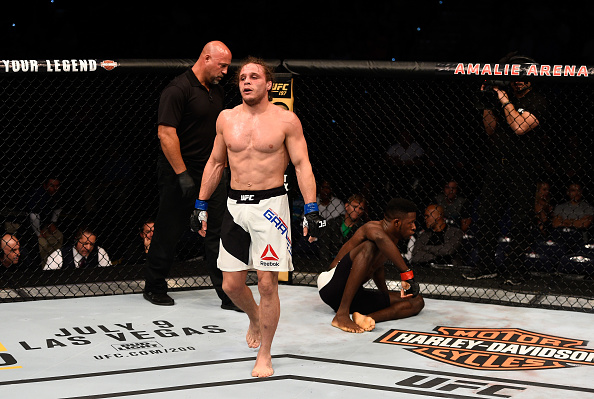 Now 6-0, Graves shares the cage this weekend with Bojan Velickovic, another up and coming relative newcomer in the 170-pound ranks who collected a victory over Alessio Di Chirico in his promotional debut back in April.

Given the depth in the division, Graves is a long way from being in contention or breaking into the rankings, but he’s surrounded by a tremendous collection of coaches and training partners and has done some quality work thus far. With a little more time and a couple more victories, the 25-year-old could find himself getting a lot more attention in the loaded welterweight division.
RELATED CONTENT: Fighter bios - Nikita Krylov | Michael Graves | Erik Perez

There was a ton of hype surrounding Perez when he hit the UFC four years ago, and it only escalated when “Goyito” scored three straight first-round stoppage wins to begin his time in the Octagon. But after losing two of his next three fights, that momentum came to a screeching halt and people seemed to forget about Perez.

Fast forward to today and the Mexican bantamweight is back in action this weekend, looking to build on his unanimous decision win over Taylor Lapilus from last year’s event in Monterrey. Now training with the Alliance MMA crew in San Diego, Perez squares off with dangerous veteran Francisco Rivera in what should be a sure-fire smoke show in Atlanta.

What’s interesting about the ebb and flow of hype behind Perez over these last several years is that he’s still just 26 and his two UFC setbacks came against Japanese veteran Takeya Mizugaki and Bryan Caraway, a perennial contender who just put himself in the Top 5 with a gritty decision win over Aljamain Sterling back in May. Plenty of elite competitors experienced setbacks on their way to the top, usually at the hands of more experienced foes.

Perez has suffered those losses and if he’s learned from them and taken some positive steps forward under Eric Del Fierro, don’t be surprised to see “Goyito” make another climb up the bantamweight rankings.