On the Rise: TUF 27 Finale Edition

While the lion’s share of the attention during International Fight Week is going to be focused on UFC 226 and its twin championship fights, Friday’s Ultimate Fighter 27 Finale offers an intriguing assortment of contests featuring a host of fresh talents looking to make their mark on the UFC roster.

Headlined by clash between middleweight stalwart Brad Tavares and rising star Israel Adesanya, the card features a host of former TUF contestants and competitors from Season 1 of Dana White’s Tuesday Night Contenders Series, as well as several members from this season’s crop of fighters that made up Team Miocic and Team Cormier.

Here’s a closer look at three competitors looking to kick off International Fight Week with a bang.

This is On the Rise: TUF 27 Finale Edition. 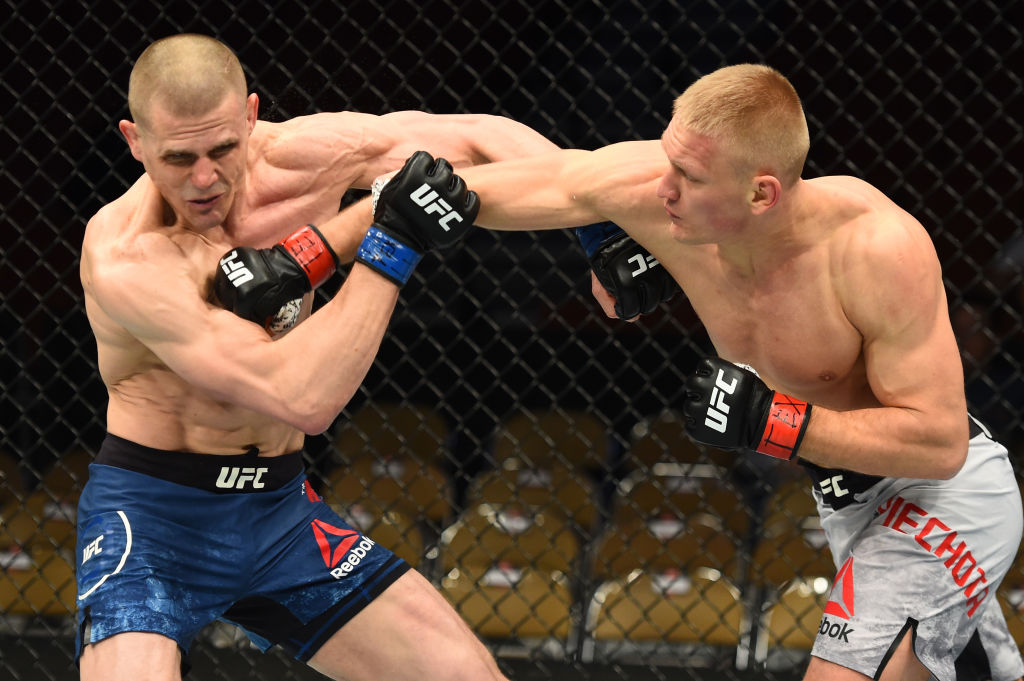 A couple weight classes too big to compete on this season of The Ultimate Fighter, Piechota is, however, undefeated and he enters Friday’s contest with Gerald Meerschaert with eight consecutive victories, including a wins in each of his first two Octagon appearances.

Last time out, the 28-year-old Polish middleweight made quick work of Tim Williams, knocking out the regional veteran in just under two minutes to push his record to 11-0-1 overall. Firmly established as a fighter to watch in the 185-pound weight division, Piechota now faces a step up in competition in the form of Meerschaert, a Roufusport product who should be able to hang with him in the grappling department and give the surging newcomer his toughest test to date.

Though graduating from facing Williams to sharing the cage with the 36-fight veteran Meerschaert is certainly a challenge, this is precisely the type of fight that Piechota needs at the moment. He encountered very little resistance on his way up the regional ranks and has handled each of his previous two UFC opponents without much trouble, but “GM3” has a wealth of experience and the balanced skill set to push Piechota and give the unbeaten talent an opportunity to make a major statement with a victory.

Following the first loss of his professional career, Bravo looks to rebound this week in Las Vegas in a showdown with fellow Ultimate Fighter alum Alex Caceres.

After defeating Claudio Puelles to win the lightweight tournament on Season 3 of The Ultimate Fighter: Latin America, the 24-year-old Bravo squared off with late replacement Humberto Bandenay in Mexico City and just 26 seconds into the opening round, his undefeated record was no more. Prior to his loss to Bandenay, Bravo had rattled off 12 consecutive victories, including nine finishes, and he’ll look to get back to those winning ways in this dangerous pairing with Caceres.

One of two fighters from Season 12 of the long-running reality TV competition still on the roster, Caceres has been consistently inconsistent throughout his UFC career, amassing an 8-9 record overall and chasing flashes of brilliance with frustrating performances. Just 1-3 over his last four, the 30-year-old veteran is also hungry for a victory and should present a stern test for the Entram Gym representative.

But if Bravo can get back into the win column with a strong performance against a seasoned, established competitor like Caceres, it should set the young Mexican hopeful up for greater opportunities in the second half of the year.

Fighting out of Fortis MMA, Peterson came up short in his bid to break onto the UFC roster when he dropped a split decision to Team Alpha Male prospect Benito Lopez on the penultimate episode of Dana White’s Tuesday Night Contender Series last summer. But like several other hopefuls to compete inside the TUF Gym, the 28-year-old was called back to compete on short notice earlier this year and while the results didn’t fall in his favor, “Ocho” still impressed.

Paired with fellow Contender Series alum Brandon Davis, the two delivered a Fight of the Night-winning performance in Austin, Texas, resulting in Peterson getting another chance to collect a victory inside the Octagon and cement his place on the roster Friday night in Las Vegas when he takes on Matt Bessette.

The New England regional veteran Bessette followed a similar path to the big stage as Peterson, coming up short on the opening week of the Contender Series last summer before accepting a short notice bout against Enrique Barzola earlier this year and impressing in a losing effort. A seasoned competitor who was unbeaten in his previous eight outings prior to facing Barzola, “The Mangler” is a perennially tough out and has the skills to push Peterson inside the cage.

But the former LFA champion is better than his recent form suggests and while he’s struggled to find consistency as of late, perhaps his bonus-winning battle with Davis will serve as a catalyst for a quality run on the biggest stage in the sport for the Dallas-based featherweight.