On the Rise: TUF 26 Finale Edition

The first card of the week had to come second in this week’s tandem OTR offerings because Friday’s championship pairing wasn’t revealed until today.

But now that we know who will be throwing down in the quest to become the inaugural women’s flyweight champion, it’s time to take a look at the emerging talents to watch on this weekend’s initial event.

This is the Ultimate Fighter 26 Finale Edition of On the Rise.

Given that she was considering taking a break from fighting to go back to school when tryouts for this season of The Ultimate Fighter were announced, it’s safe to say things have gone pretty well for the 28-year-old Montano.

The Fit NHB product entered the competition as the 14th seed, but has strung together upset wins over Lauren Murphy, Montana De La Rosa and Barb Honchak, all by decision, to arrive as one half of the initial pairing to battle for the UFC 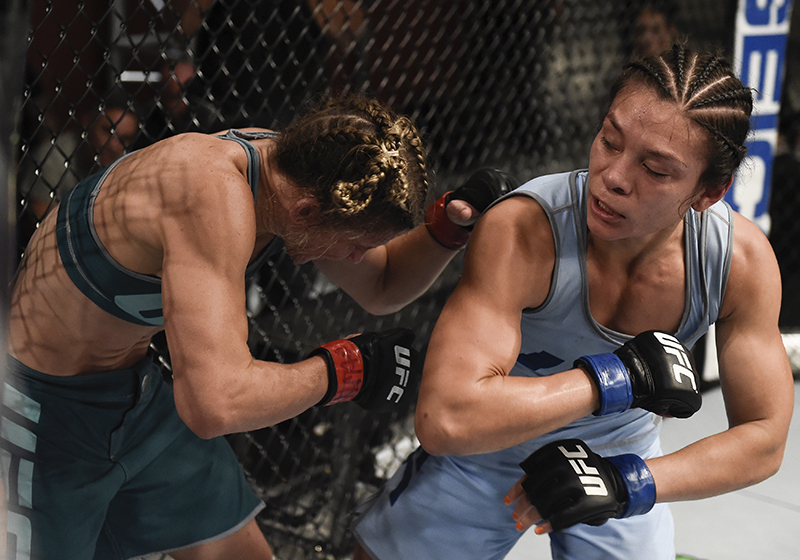 women’s flyweight title. In addition to logging a great deal of time in the Octagon during her three tournament wins, Montano has also prepped for championship fights in the past, as each of her last two appearances before the show were five-round title fights.

After starting the year with a loss and being unsure about continuing her career, Montano has rattled off three straight impressive performances and stands on the precipice of history. With one more victory, she will etch her name in the record books as the first UFC women’s flyweight champion.

Bennett is a perfect example of why there are times in this sport when you have to look beyond the wins and losses that make up a fighter’s resume in order to get a complete picture of who they are as a fighter.

On first blush, the three consecutive setbacks that carry the Utah native into the cage for her bout against fellow Team Alvarez alum Melinda Fabian on Friday night might lead you to conclude she’s a middle of the road talent who got the better of lesser competition on her way up the ladder only to stumble once the going got tough. In reality, Bennett has spent her entire career facing elite competition and after getting stopped in her bid for the Invicta FC strawweight title, she dropped a pair of razor-thin split decisions to a pair of accomplished veterans who she now joins on the UFC roster, Roxanne Modafferi and Jodie Esquibel.

The 33-year-old is tough and tenacious - the type of fighter that is solid everywhere, but whose greatest attributes are her conditioning, her resilience and her moxie, qualities that should lead to Bennett quickly becoming one of the key pieces of the UFC’s new division. While there are no guarantees that she’ll want to offer up sweaty hugs to whomever interviews her in the Octagon after victories the way she did to Lauro Sanko during their four post-fight meetings in the Invicta FC cage, the quirky Bennett has the talent to be a factor in the flyweight ranks right out of the gate and a convincing performance against Fabian should put her in the thick of the title conversation as the division comes together heading into 2018.

One of several promising, young upstarts from the MMA Lab to be on the lookout for, the 23-year-old bantamweight is a bundle of excitement and swagger when he’s in the cage, happy to take one to land one and confident that his shot is going to put his opponent down. Tall for the division and sporting a mop of curls reminiscent of Charlie Brenneman back in the day, O’Malley has rattled off eight straight victories to start his career, collecting six first-round stoppages and only going the distance once.

This weekend, the charismatic upstart squares off with Terrion Ware in his toughest test to date. A 31-year-old veteran with a ton of experience under his belt, Ware is the most seasoned foe O’Malley has faced thus far, but if the John Crouch pupil can continue his winning ways and deliver another memorable performance, we could see “Sugar Sean” get a serious push in 2018.