The rise of the 'Strange Little Men'

Joseph Benavidez laughs when I ask him about the training team he’s put together for his Friday bout against Henry Cejudo.

“Strange Little Men,” he calls this squad. And while he leaves it at that, a quick run through the world of social media sees the No. 1-ranked flyweight contender working with several other 125-pound standouts, including members of the team he coached on season 24 of The Ultimate Fighter, as well as longtime teammate and former 135-pound champion TJ Dillashaw.

It’s a group that knows all about fighting. But maybe more telling is that they know what it’s like to live life as flyweight prizefighters. It’s not an easy gig, even though they perform at as high a level as their heavier peers do, and are no strangers to putting on the kind of exciting bouts that usually result in a post-fight bonus when waged inside the UFC Octagon.

But in a society where bigger is often seen as better, the flyweights of the MMA world have had an uphill climb, even in the UFC, which brought the division into the promotion in 2012 with a four-man tournament designed to crown a new champion.

RELATED: Hear UFC fighters talk about why Demetrious Johnson is one of the best ever | Benavidez talks obsessions ahead of Cejudo fight | Cejudo wiser after DJ fight | Tickets to The Ultimate Fighter Finale

It all started well, Benavidez knocking out Japanese veteran Yasuhiro Urushitani to earn his spot in the final, while Demterious Johnson waged war twice with Ian McCall to make it into the first UFC flyweight title fight. And when that fight between Johnson and Benavidez took place at UFC 152, it was an instant classic that resulted in a close split decision win for the new champion, “Mighty Mouse” Johnson.

That was the good news for the 125-pounders. The “bad,” depending on your point of view, is that Johnson has dominated every step of the way for the ensuing four years. That’s a great development for Johnson, who has successfully defended his title eight times and will look to make it nine when he meets the winner of TUF 24 on Saturday. He may have already stamped his ticket to the Hall of Fame, with only all-time great status left to achieve for the pound-for-pound king.

But in the process, Johnson’s rule over the division has left the impression that it’s him and everybody else at 125 pounds. The critics point to the fact that Johnson’s top two challengers – Benavidez and John Dodson – have lost to him twice. Those critics forget that despite this, there are a host of talented veterans waiting for either their first or another crack at the champ and a stampede of young guns hoping to get into that conversation in 2017. 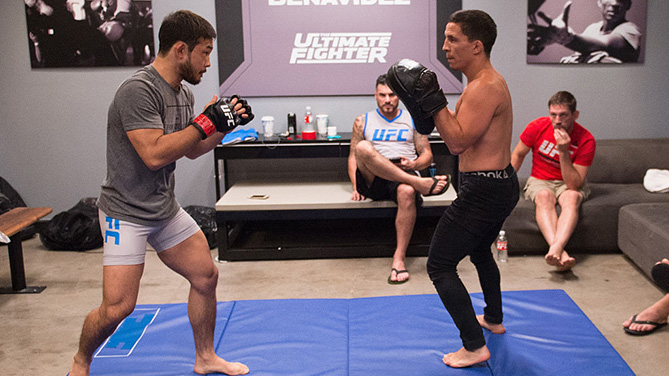 If you’re a fight fan, you can’t help but be hopeful about the future for the likes of Louis Smolka, Sergio Pettis, Brandon Moreno, Ray Borg and Ben Nguyen, all of whom have made an impact for a division in need of young and exciting talent.

Yet it’s those 16 young men who spent six weeks competing for a shot at Johnson on TUF 24 who may be the ones who gave the division the jolt it needed. All champions in various regional promotions, they all fought for a coveted world title fight, but it was more than that. Almost to a man, these 16 fighters talked about being exciting on TUF and showing the world just what the flyweights could do on the sport’s biggest stage.

“That’s big for me,” TUF 24’s Eric Shelton said. “Going into the house, that was my ultimate goal. I wanted to be exciting for the division. This division is super exciting and stacked. We haven’t had the chance to show what all of us are capable of because Demetrious has been cleaning the division out. So it means everything to me to make the division something, and I think we have a good opportunity here.”

“It’s very hard to describe, and some people don’t realize, but most of us are better than guys in the UFC,” added Jaime Alvarez. “Most of us could already be top 10 UFC fighters. It’s a young division and the best guys aren’t in the UFC right now, so I knew going into it that I was going to see some of the best talent that there’s ever been, inside or outside of the UFC.”

Fighting words for sure, but this gang delivered, guaranteeing that fans of the 125-pounders remained and that non-believers were converted. And on Saturday, one of those 16 could leave the Octagon as a world champion.

But even if the TUF 24 winner doesn’t strike gold and Johnson continues to rule the division with an iron fist, this season of the reality series that produced world champions Forrest Griffin, Rashad Evans, Michael Bisping, Matt Serra, TJ Dillashaw and Carla Esparza has reintroduced a division that has proven it belongs.

Call that a victory for the Strange Little Men.