On the Rise: St. Louis Edition

Welcome to another year of On the Rise, where every fight week, I’ll shine a spotlight on a trio of new and emerging talents set to step into the Octagon for your viewing enjoyment.

A ton of great fighters have appeared in this series over the last couple years – contenders like Brian Ortega and Jimmie Rivera, intriguing upstarts like Curtis Blaydes and Paulo Costa and title challengers Francis Ngannou and Volkan Oezdemir – and the plan is to introduce you to another crop of similarly talented athletes over the next 12 months, starting with the kickoff event for the 2018 campaign.

This is On the Rise: St. Louis Edition.

The latest graduate of Dana White’s Tuesday Night Contender Series to make his Octagon debut, Frevola carries a perfect 6-0 mark into his lightweight matchup with Marco Polo Reyes on Sunday.

After rattling off three wins in eight months to push his record to 4-0, Frevola took a step up in competition under the Titan FC banner, earning a unanimous decision win over Team Nogueira’s Raush Manfio before handing Luke Flores his first professional setback this past summer in Las Vegas. The 27-year-old has earned stoppages in four of his six previous appearances and has never suffered a loss inside the cage, having gone 8-0 as an amateur before making a seamless transition to the pro ranks in 2014.

Frevola will have his hands full this time around, though, as Reyes is the most seasoned and savvy opponent he’s faced to date, boasting a 3-1 record under the UFC banner and a 7-5 mark overall. The lightweight division is stacked with talent, so the only way for Frevola to stand out and start making a name for himself is to add another impressive performance to his resume and keep his perfect record intact as he begins his UFC journey. 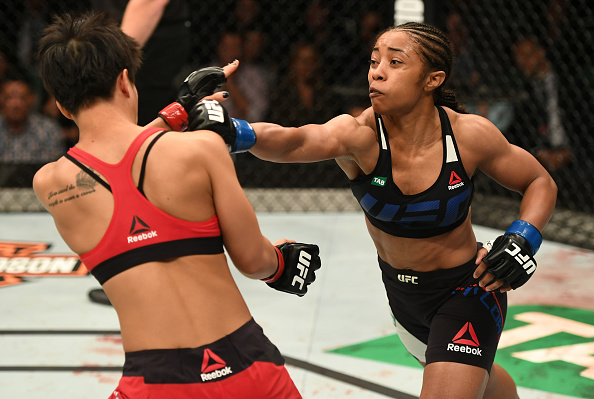 Taylor came out on the wrong side of a split decision result in her promotional debut in August 2016, but found her footing in the strawweight division last year, posting decision wins over Seohee Ham and Jessica Penne. Now she looks to make it three in a row with a tough preliminary card showdown against durable veteran JJ Aldrich in St. Louis.

The 28-year-old Taylor is a stick-and-move artist, making up for her small stature by darting in with quick punches and kicks before retreating back into space. After struggling to connect with much in her first Octagon appearance, the Saekson’s Muay Thai representative has done a good job of making the required adjustments and using her speed and movement over her last two appearances.

Fresh off her first UFC victory, Aldrich is more experienced than her 5-2 record shows and a tough out for anyone. Should Taylor be able to collect another victory and extend her winning streak to three, we could see “Dynamite” breaking into the Top 15 in the 115-pound weight division.

While most simply see the result, the truth about Burnell’s UFC debut back in September is that the Danish lightweight acquitted himself quite well against Brazilian powerhouse Michel Prazares given that he took the fight on a month’s notice and Prazares missed weight by three pounds.

With the benefit of a full training camp behind him for this one, the 23-year-old neophyte aims to get back into the win column with a victory over fellow sophomore Mike Santiago.

Results aside, there was a lot to like about Burnell’s performance against Prazares in Rotterdam as he was able to hang with the veteran grappler in the early going and showed flashes of potential. Boasting good size for the division and a solid ground game, Burnell is definitely one to keep an eye on going forward in the lightweight ranks.

Santiago was one of the first DWTNCS alumni to matriculate to the Octagon, filling in for Nick Hein opposite surging newcomer Zabit Magomedsharipov on the same early September fight card in the Netherlands where Burnell faced Prazares. The loss brought his impressive 11-fight winning streak to a halt and he’ll be champing at the bit to get back into the win column here, so if Burnell can prevent that from happening and pick up his first UFC victory in the process, he’ll take a step forward in the deep and talented lightweight depths as 2018 gets underway.